Making Gay Okay: How Rationalizing Homosexual Behavior is Changing Everything 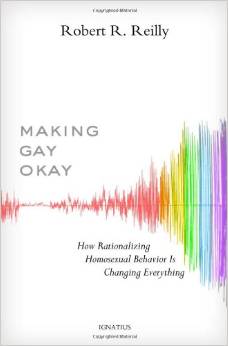 On June 26, 2013, the United States Supreme Court ruled in a split 5-4 decision that Section 3 of the Defense of Marriage Act (DOMA) was unconstitutional and struck it down. That part had specifically barred same-sex couples from being considered spouses under federal law, effectively banning them from marriage and its accompanying benefits. In the two years since that decision, thirty-four states have legalized same-sex marriage, twenty-six through court orders and eight by state legislatures. For many Americans, such a radical and swift change in legislative and judicial actions at both the state and federal level have seemingly come out of nowhere, catching many off-guard. In addition, public sentiment has likewise undergone a seismic shift, as majority disapproval of same-sex marriage a few years ago has suddenly flipped and now a majority not only approve but advocate for its legalization.

How did this happen, and how can Americans understand the rapid cultural changes that seem inexplicable? In his new book, Making Gay Okay, Robert Reilly sets out to explain these recent changes and make sense of the murky moral and legal cultural landscape in which these phenomena have taken root. Reilly divides his book into two parts: the first part explores the logic behind the rationalization of homosexual behavior (and same-sex marriage), and the second part takes the reader on a whirlwind ride through major US institutions, demonstrating how the gay lobby has conquered each in turn.

The brilliance of Reilly’s first part is that he doesn’t treat homosexuality and same-sex marriage simply as modern-day phenomena that must be examined, but he rightly locates the heart of the debate in age-old philosophical questions and answers to those questions. The central issue, then, is who men and women are as human beings and what brings about their flourishing. Corollary issues involve the nature of reality, obligatory behaviors, and whether humans have a Nature. Reilly positions the contemporary conversation between traditionalists (those who believe marriage is a monogamous man-woman lifelong relationship), and revisionists (who want to see same-sex marriages) as really an ancient conversation between Aristotle and the eighteenth century philosopher Jean-Jacques Rousseau.

Aristotle answered the anthropological question by claiming that man is essentially by Nature a rational and political being who finds his origins in the family, the most basic and fundamental social unit of society. Out of this grows a specific metaphysic: that all of life is teleologically designed, or as Aristotle puts it in his Metaphysics, “Nature is a cause that operates for a purpose.” These natural laws and the purposes toward which they are directed precede human life and are immutable and universal. Thus, man is subject to them and will only flourish when he acts in accord with his Nature. This nature of humans is their essence, or that which makes them what they are and not something else. Not only is the universe itself teleologically oriented, but each person has entelechy (“having one’s end within”), by which the goal and purpose for living can be known. Therefore, since man is a rational being, and the universe is intelligently ordered (often called the logos by early Greek philosophers), each of us is capable of discerning the natural order of things. Once that’s done, the choice is either to live in harmony with nature or refuse to do so. Aristotle’s metaphysic allowed him to make two critical distinctions: first, between custom or convention (the way things happen) and Nature (the reason why they happen), and second, between those things which are natural and rational (functioning in harmony with Nature), and things unnatural and irrational (operating contrary to Nature). Modern dialogue about “natural” and “unnatural” marriages find their etymological and conceptual origins in Aristotle.

Such was the prevailing belief about the nature of reality among western philosophers for centuries. However, it did not last, and one man who sought to completely overturn it was Rousseau. Rousseau flipped Aristotle’s anthropology and metaphysic on its head: Nature is not a governing teleological principle, but a beginning with nothing but endless possibility stretching out into the future. Since man lacks an immutable Nature, Nature cannot form any boundaries or guidelines for directing life. In addition, Rousseau denied that humans were rational, social, and political beings, but instead, all humans begin in a “state of nature” in which they are isolated, God-like in self-sufficiency, asocial, apolitical, and pre-rational. Thus, there are no moral imperatives, for man is by nature good, and there only exist boundless possibilities to become whatever one decides to be. For Rousseau, once humans leave this blissful state and enter into familial and social relationships, they become fallen and corrupted, adopting an unnatural and artificial existence. While Aristotle taught that man needed both the family and polis to become complete, Rousseau taught that both institutions robbed man of his perfect natural state.

How does this relate to the homosexual and same-sex marriage debate? Following Aristotle, the purpose and meaning of sex can be naturally discerned. Sex finds its proper exercise and place within the (heterosexual) marital bond, as only this kind of relationship can fulfill the unitive and procreational purposes of sex. Since marriage is a comprehensive union of both body and soul between two persons, and since biology, psychology, and human anatomy require one man and one woman for such a union, only a heterosexual, monogamous relationship will suffice. In addition, the creation of new life (children) necessarily requires a mother and a father, and the resulting family is uniquely suited to adequately provide for the raising and rearing of children. In a chapter entitled “The Lessons from Biology,” Reilly explores in detail how we can discern from biology and health consequences that homosexual relationships are both unnatural and deeply harmful for those involved. In particular, the health risks incurred from homosexual sex are staggering and explosive, with male homosexual partners losing up to twenty years of life expectancy. (In the Appendix, Reilly lists the myriad of diseases resulting for homosexual relations.) Surely if there was any natural indication that some behavior was disordered and to be avoided at all cost, this would be it. Finally, in a chapter on same-sex parenting, Reilly aptly demonstrates that the modern belief that a mother and father are not required to properly raise children is a myth. The risks that same-sex marriages pose to children are substantial, from household instability and higher rates of marital infidelity, to unemployment, depression, drugs, and trouble with the law. In short, the dysfunction of the homosexual parents is in many ways passed on to the children.

Yet none of this would have made Rousseau blink. If there is no natural order to life, and if there are no moral imperatives, then anything goes. What could possibly be wrong with homosexual behavior and same-sex marriage? The family as traditionally understood was artificial according to Rousseau, so the idea of same-gendered spouses raising children would be unproblematic. Both types of marriages and families consist of nothing but convention. Since man’s nature is endlessly malleable, purpose is assigned by our desires and carried out by those with the power to do so. Thus, brute force becomes a critical factor in Rousseau’s philosophy, for it is by force that virtue is formed in accordance with our desires. Reason, instead of guiding us according to design and purpose to know and contemplate the Good, becomes an instrument of rationalizing such a worldview and lifestyle. For Rousseau, like Jean-Paul Sartre after him, existence precedes essence. This means that man just has to “be,” and not only is such being necessarily acceptable, but it allows a person to endlessly remold themselves as they wish. Tragically, our society has imbibed Rousseau’s worldview and now reality is finally catching up with us.

An important part of Reilly’s project is to expose how rationalization works once one rejects reality and attempts to construct a make-believe fantasy world. Going back to Aristotle, we discover that he taught that humans are incapable of choosing to do evil acts unless they convince themselves that what they are doing is actually good. Instead of submitting ourselves to a natural order outside ourselves in an attempt to become just, we seek to justify ourselves and our behaviors. Conscience is one faculty that often brings such a project to an abrupt halt; we crash into the hard reality of the moral order of the universe, our rationalizations are exposed, and we are forced to realign ourselves with what is true and good. Yet conscience can continually be calloused and suppressed (but not obliterated) through a permanent entrenchment of a lifestyle of rationalization. However, in order for this deception to succeed, there can be no dissent. Any objection to the rationalized lifestyle that would threaten to undo it must be silenced, for the consciences of others expressed through reasoned argumentation and presentation functionally act as a collective and public conscience condemning the immoral lifestyle of the rationalizer. If the rationalizing project fails, the person will not only be forced to repent of their behavior, but admit to their construction of a false reality. For the rationalizer, this cannot be allowed to happen. Thus, what began as a plea for tolerance by the homosexual movement in America has morphed into a demand for total acquiescence and surrender.

Reilly has much more to say throughout the rest of the book. In a chapter on justice, he counters the oft-repeated claims that the just thing to do is legitimize same-sex marriage. He shows that justice requires a nature and a telos in order to make any sense at all. In a chapter on homosexual litigation, he demonstrates how the courts (both state and federal) have wrongly gone about inventing a new sort of morality that is deeply immoral and the logic of which will inexorably lead to the legalization of every deviant sexual behavior known to humanity. In the second half of the book, Reilly marches us through major US institutions – science, parenting, education, the Boy Scouts, the military, and foreign policy – demonstrating in a terrifying way how the gay lobby has pervaded, corrupted, and forced each segment of society to either capitulate to their demands or be silent. This, of course, is the outworking of the rationalizing project that homosexual advocates have embraced and it will lead not only to a more debauched society, but to one built upon a volatile and false reality that will be short-lived. This is why everything is changing and it very well could spell the end of the American social and moral fabric as we know it.

I cannot recommend Reilly’s book enough. It exposes not only the misleading and shallow clichés used repeatedly by those attempting to justify homosexual behavior, but it gets to the heart of the matter through a piercing examination of Aristotle and Rousseau’s anthropology and metaphysic. Reilly sheds light not just on the underlying ideas and issues at stake here, but at their outworking in the greater society. For anyone who feels lost or confused about the rapid sexual transition America has made on homosexuality and same-sex marriage, Reilly’s book is required reading.