Matthew, Disciple and Scribe: The First Gospel and Its Portrait of Jesus 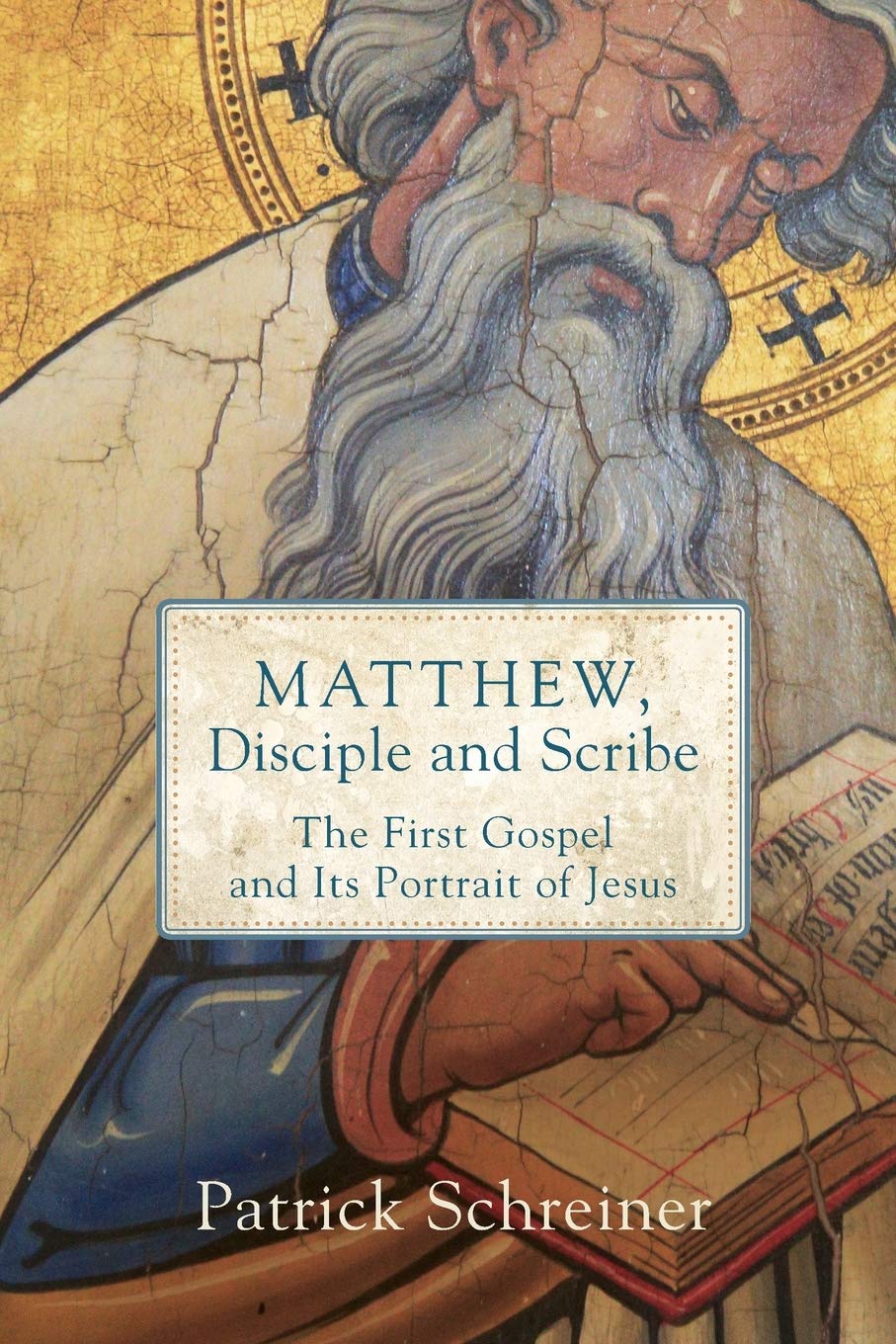 Patrick Schreiner is an Assistant Professor New Testament at Western Seminary in Portland, Oregon.  He has written a clear and helpful medium-sized book on the Christology of the Gospel of Matthew, focusing particularly on the key Old Testament characters at institutions that Jesus recapitulates and fulfills.  Chapters discuss such topics as Jesus as wise sage, teacher, Davidic king, new Moses, new Abraham and the fulfillment of Israel more generally.

Schreiner tantalizes the reader trying to discover his overall thesis statement as he discloses it in stages.  Early on, we learn, as in the book’s title, that Matthew, using the language of Matthew 13:52, is the discipled scribe, discipled of course by his master, Jesus.  In short order, that affirmation is expanded to “Matthew is the discipled scribe who narrates Jesus’ life through the alternation of the new and the old,” still using the language of 13:52 (p. 9).  Soon that is lengthened further to him as “a learned Torah-royal-sapiential scholar who penetrated prophecies and studied the hidden meanings of the Hebrew Scriptures” (p. 21).  Jesus, too, develops in Schreiner’s unfolding theological exposition from a wise sage to a wise apocalyptic sage who is a Davidic shepherd-king and suffering servant fulfilling the Law and opening the gospel to the Gentiles.

To the extent that at times Schreiner seems to want to use one of two of these categories as encompassing all the others, it is not clear that he succeeds. But he certainly surveys well the material in Matthew to support each of them individually along with showing their various overlaps.  Particularly helpful is his stress on fulfillment of “the persons, places, things, offices, events, actions, and institutions of the OT (p. 55).  Matthew recognizes that Jesus reflects and completes the narrative of Israel’s history.  While historically, Christians have too often overemphasized the dissimilarities between Jesus (and the Gospel writers’ portraits of him) and the Judaism of his world, recent scholarship may have overemphasized the similarities.  Schreiner captures the balance between the two quite well.

In several chapters Schreiner shows how key appearances of the theme at hand can be viewed as summarizing large chunks of Matthew, thus affording a structuring device.  Particularly convincing is how he highlights the placement of fulfillment and related quotations of the Old Testament as keys to the narrative flow of the Gospel.  Because Matthew is thinking narratively, we should not be surprised that major clusters of several of these themes concentrate themselves in the introductory and concluding chapters, reflecting Jesus’ origins and preparation for ministry and his passion, death and resurrection.

As Ben Witherington has stressed even more, Matthew’s distinctive emphasis on Jesus as Son of David stems in large part from his wisdom like that of Solomon, David’s son.  It also accounts for the otherwise surprising links between Son of David and healing, due to Jewish traditions that Solomon worked certain miracles of healing.  On the other hand, it is a bit of a stretch to see a large stretch of Jesus’ ministry as corresponding to David’s exile from Jerusalem.

Schreiner does reinforce other good surveys of elements foreshadowing Matthew’s move from particularism to universalism, that is from an Israel-centric ministry to the Great Commission that sends Jesus’ disciples to all the peoples of the world.  These include especially the Gentile women in the genealogy, the Magi, the healing of the centurion’s servant with prophecy fulfilled in the healing of the nations, the withdrawal from Galilee building to the theme of universal judgments in the parables of chapters 24-25.

The overlapping of categories is well illustrated in the chapter on Jesus as the ideal and wise king.  Embedded in this chapter is an excellent treatment of Jesus as a living law, even though one might have expected that topic to come in the chapter on Jesus and the Mosaic exodus.  Jesus as a new Abraham is more plausibly linked with Matthew’s foreshadowing the Gentile ministry; after all, Abraham’s seed was to provide a blessing for all the peoples of the earth.  To speak, on the other hand, of Jesus having an Isaac-like death is a bit misleading, since Isaac never died.  Of course, Jesus, too, was rescued from death but only after first going through it.  It is popular in some circles to think that various NT texts echo the Jewish Akedah tradition, but the climax of the Genesis story highlights that Abraham’s son did not provide the sacrifice that the ram caught in the thicket did.

By the end of Schreiner’s study, we get the fullest summary of the volume’s conclusions.  “The discipled scribe demonstrates the wisdom he learned from his teacher in a variety of ways.  We can follow him down into the valleys and watch how he shifts OT quotations to make a point, or we can track him up to the mountain and watch as he looks out over the life of Jesus as a whole.  As we stand at the peak, we can see that Jesus is the new Adam, Abraham, Moses, Joshua, David, Solomon, Elijah, and Jeremiah, but Matthew also has Jesus recapitulate a broad chronological structure of the history of Israel, and therefore Jesus stands as the new Israel, who leads his people out of exile” (p. 239).  This is an excellent fulsome summary of the book, but a bit too disparate to qualify as a single, unifying thesis to which we thought the book was building.  Nevertheless, if one wants to become intimately familiar with the Christological emphases of Matthew, this work offers an excellent starting point.