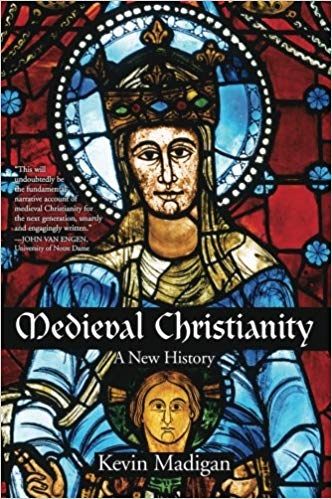 The medieval era, by which historians generally mean the period of time from the death of Augustine in 430 A.D. to the publication of the Ninety-Five Theses by Luther in 1517, is often ignored by Christians and non-Christians alike. Protestants sometimes dismiss this thousand year-plus portion of the church’s past as irrelevant or ungodly or both. Non-Christians often characterize it as a time of religious ignorance, superstition and ecclesiastical oppression. In his immensely rewarding survey of this period, Medieval Christianity: A New History, Kevin Madigan shows why such inaccurate generalizations are wrong. He illustrates time and again the wonderful and yet strangely complex nature of this thing called ‘the church’ and its cultural impact over the length of a millennia.

Madigan, the Winn Professor of Ecclesiastical History at Harvard Divinity School, designed his work as a text on church and society in the Middle Ages, seeking to update R.W. Southern’s classic account on the subject from 1970. In numerous ways, Madigan succeeds in accomplishing this objective. Even better, he has written a book that often reads like the narrative of a family that is at times healthy, occasionally dysfunctional and always in flux. Medieval Christianity shows in splendid detail how the church, a divinely sanctioned institution according to the New Testament, is also a very human entity in its intellectual, moral and organizational development.

Madigan structures his book in four main sections. The first, a description of Early Christianity from 150 A.D. to 600 A.D., provides the necessary historical background to the Middle Ages. After a helpful overview of the heresies of Gnosticism, Marcionism and Montanism, Madigan turns his attention to the rise of orthodoxy which he labels ‘normative Christianity.’ Here he argues, somewhat surprisingly, that church councils, rather than the canon of Scripture, were joined to the creed and clergy as the foundational elements of orthodox Christianity. This section is rounded off with chapters on Roman persecution, the Constantinian revolution, and that theological exemplar, Augustine of Hippo.

Section Two surveys the most prominent aspects of early medieval Christianity (c. 600 – 1050 A.D.). Substantive chapters are devoted to the conversion of the Franks, the influence of St. Patrick, the rise of the Benedictines and the papacy, Gregory the Great’s mission to spread the Gospel, the advance of Christianity at the local level, the relationship of Christians and Jews and the advent of Crusading due to Islamic aggression. For specialists in the field, much of this material might be construed as somewhat repetitive. But the chapter on parish life with its detailed descriptions of church buildings, education and catechesis as well as the discussion of liturgy, sacraments and preaching is impressive. Here we see, in as much detail as the records allow, how the Faith spread among an illiterate population that was originally pagan and “folkloristic” in its culture. Madigan’s research and historical expertise shine through at this point. For example, he describes how the doctrine of purgatory and the cult of Mary both arose from the interaction of culture and Christianity. In his view…

…medieval culture was a dynamic interaction between elements of the Christian faith sponsored by priests and those given life or popularity by the people. In attempting to understand medieval Christianity, we stray far from the truth if we imagine priests and people as inhabiting two different worlds of thought and practice or if we believe that the experience of ordinary medieval folk can be captured in the vocabulary of folklore and with the social scientific tools used to describe it today (p. 94).

Section Three, on High Medieval Christianity from 1050 A.D. – 1300 A.D., comprises the majority of the book’s content. Its ten chapters take up 248 pages of the text and cover everything from the Cluniac reform movement of the mid-eleventh century to the end of the Crusades in 1291. Significant portions are devoted the papal supremacy of Gregory VII, the lives of St. Francis and St. Dominic and the monastic movements they created, teachers like Peter Abelard and Thomas Aquinas, the creation of universities, the advent of relics, saints and pilgrimages as well as the spread of heresy and its suppression. While none of this is necessarily new, Madigan once again demonstrates his scholarly acumen by highlighting the intense efforts of both churchmen and churchwomen to piously serve God and provide spiritual aid and pastoral help for those under their care. We’re told how Dominican and Franciscan friars “ministered to a new, urban, commercial population that had been largely despaired of, ignored and given to believe that it was, at best, demi-Christian” (p. 211). We’re given a glimpse into how diocesan bishops tried “to confirm that the Christian faith was taught to all baptized Christians and, in some regions and at some times, to disseminate it to potential converts” (p. 299). The author also supplies a detailed description, supplemented by numerous pictures of statutes and crucifixes, of the church’s intense efforts to teach and reinforce piety among the various populations of what, over time, became Western Europe (pp. 300-312). Collectively, these efforts established a solid foundation of pastoral care that bore spiritual and institutional fruit through the creation of lay fraternities, guilds, and charities in the late twelfth and early thirteenth centuries. Some Protestant readers of The Denver Journal may not think much of all this ecclesiastical activity but it does reveal how committed the medieval church was to Christianizing the populace.

Section Four covers Later Medieval Christianity from 1300 to 1500. Once again, most of the standard people, themes, and controversies are covered; Wyclif and Hus followed by the Conciliar Movement and its failure to restrain the papacy, the growing prominence of mysticism and the spiritual condition of the church on the eve of the Reformation. But what surprises here is the amount of attention Madigan devotes to individual efforts at reform. He provides detailed descriptions of Savonarola’s work in Florence, the papal sponsored reforms of Nicholas of Cusa, and Ximenez de Cisneros’ efforts to renew the church in Spain. Collectively, these demonstrate that something was manifestly wrong with the late medieval church and that various Christians sought to fix it but without much success. Thus, by 1500 the stage was set for the ecclesiastical revolution that came to pass in the first decades of the sixteenth century.

There is much to commend in this book. For starters, Madigan has included much of the recent historiographic work on the role of women in the medieval era. In addition to some of the more well-known female mystics such as Hildegard of Bingen, Julian of Norwich and Catherine of Siena, we’re told about Carthusian nuns, Cistercian women and Dominican sisters. Women played prominent roles in medieval society as anchoresses, abbesses, lay patrons and spiritual guides. Their influence was abundantly consequential and Madigan is to be commended for bringing this to light.

A second strength of the book is its emphasis on the tenuous relationship between the church and different governing authorities that arose throughout the Middle Ages. Madigan does a terrific job of demonstrating the enormous impact of Charlemagne, the problematic nature of Hildebrand’s doctrine of papal supremacy and the horrible tangles that resulted from the Avignon papacy and Great Schism of the fourteen century. The problem of church and state has never been adequately solved (can it be?) and yet its various expressions during the medieval era provide much fodder for Christian thought and discussion in 21st century America. Those of us in the evangelical tradition would be wise to navigate the current relationship of church and state in our society with prayerful sobriety and careful action guided by Scripture and history.

A third positive contribution this book makes is the light it shines on the reformist efforts of medieval Christians. Some of this was noted above in the discussion of specific individuals during the late Middle Ages but there were also Cluniac reformers, Gregorian reformers, monastic reformers such Bernard, Francis and Dominic, councils devoted to reform and reformers of the relationship between church and state. As Protestants, we often look to the great reformers of the sixteenth century as those who loved the church enough to take whatever painful and necessary steps were required to make her pure and whole. But Professor Madigan shows us that throughout the medieval era innumerable Christians were likewise determined to implement spiritual, moral, and institutional changes in the church whenever necessary.

And while the topic is ugly, Madigan also does yeoman’s work in describing the sometimes virulent anti-Semitism of the medieval church. Horrible myths of Jews killing Christian children to use their blood in religious rituals were often reinforced by passion plays depicting the Jews as the sole and evil perpetrators of Christ’s death. In time this led to papal denunciations followed by legal regulations designed to marginalize Jews in social and economic contexts. Ultimately this led to massacres, as during the Crusades, and expulsions as happened in fifteenth century Spain. Historians have sometimes tried to lay the blame for Nazi atrocities on Luther’s anti-Semitism but, unfortunately, the roots of this wickedness go back centuries earlier.

Books of such magnitude are bound to have weaknesses and Medieval Christianity is no exception. Madigan’s treatment of the early church gives the impression that orthodox Christianity won the day by the use of power rather than superior theology and ecclesiology over those views later claimed to be heretical. But this is an old canard that the best historiography has now disproved. Even more serious is the author’s apparent misperception of Augustine. In his discussion of the controversy between the great bishop and the Pelagians, Madigan appears to argue that Augustine’s view of creation was Gnostic, his emphasis on predestination was deterministic and his understanding of human nature unchristian (p. 26). One need not agree with Augustine’s position on these issues, especially predestination, but he certainly wasn’t Gnostic and his insights into the radically fallen nature of humanity have been empirically demonstrated time and again over the past 1600 years!

A third weakness involves an almost complete lack of attention given to Nominalism and the intellectual giants behind its development, Duns Scotus and William of Ockham. Madigan only mentions them in passing as part of a group of late medieval “neo-Pelagians” (p. 434) who influenced the fifteenth century theologian, Gabriel Biel (d. 1495). Dr. Madigan’s forte may not be historical theology but it’s difficult to understand the Reformation without first taking the rise of Nominalism and its influence on Luther into account. Moreover, both Scotus and Ockham were Franciscan monks and scientists whose contributions to intellectual history and empirical experimentation were substantive in their day.  In my opinion, they deserve more than a passing mention in a book dedicated to medieval Christianity and its impact on subsequent centuries.

Despite these flaws, this is a book which commends wide readership. In its clarity, accessibility and scholarly insights, it provides a welcome encounter with the medieval church in all her flaws and glory. Specialists will certainly find much to admire and argue with in its pages while generalists will enjoy its fluid prose as well as the fine story telling. Medieval Christianity is an impressive achievement. Most students of church history will profit from the engaging tale it tells of Christ’s church from long ago.