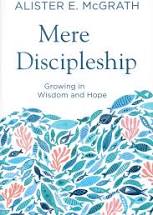 If I had to choose a pandemic reading list, Mere Discipleship would be on it. Although there are plenty of theologically weighty books to read or reread while our corporate lives are disrupted, McGrath offers a series of brief essays on why it is essential, pandemic or no (note the publication date), that we read and think. Perhaps the best reason is that we Christians are to have our minds renewed. What better time for mind renewal than when our assumptions about reality are called into question? Thus, the first section is on “The Discipleship of the Mind.”

In chapter one, McGrath makes the case that Christians ought to think differently than non-Christians. We have a rational faith that needs to be articulated and defended well. Because we are indwelled by the Spirit of God, we can and should allow “the light of Christ to shine on our intellects” (p. 8).  By faith, we can come to see the world as it really is (p. x). “This way of thinking and seeing is a habit of the mind, something that is to be practiced and cultivated” (p. 10). Again, what better time to discipline our minds than when it seems that most of the world has lost theirs? What better time, indeed, than when atheistic worldviews are on the rise and a large segment of Christianity has retreated into an anti-intellectual silo? “Our task is to discover and appreciate the intellectual depths and delights of our faith and ensure that these are proclaimed and presented to our culture at large” (p. 18).

Belief, in general, and the creeds, in particular, are the topic of the second chapter. Like many in the history of the Church, McGrath finds in the creeds “guidebooks to the landscape of faith” (p.21). These guidebooks, though the products of finite and fallible human minds, have endured for generations and help us navigate “the compelling and persuasive vision of reality that is made possible by the gospel” (p. 25). The words of the creeds endeavor to capture what is most basic to our faith and in so doing point beyond themselves to the inexpressible totality of God’s good news (p. 25). Our faith is coherent, even if our maps are only one dimensional. Ours is a corporate faith, though claimed by individuals, it expresses the wisdom and experience of many. McGrath opines that we Christians “need to see through the creeds” (p. 30). We can and should contemplate the actual words of the creeds, but having done so, we need to look beyond them and through to the world, now seen in a different light (p. 32). “Reciting the creeds is thus about both affirming what we have already discovered and come to trust, and setting an agenda for the enlargement of our appreciation of God and Christ” (p. 34).

The Church, as the community in which Christian individuals are discipled, is the focus of chapter three. It is a bittersweet chapter for us who can no longer take “live church” for granted. It should also be a hopeful chapter for us who must never again take “live church” for granted. McGrath claims, correctly I think, that metanoia, often glossed as “repentance,” is “better expressed as a ‘transformation of the mind’” (p. 36). The corporate Church is the setting in which individual believers allow their minds and imaginations to be expanded “to accommodate the rich and overwhelming vision of God set out in the New Testament” (p. 39). It is the setting in which the transformed mind bursts forth in worship. The Christian vision of reality should be shared both internally and externally. Worship in the church should inspire acts of engagement and compassion beyond its walls. McGrath speaks of the Church as being “distinct, but not disconnected from the world” (p. 43). What an opportunity we Christians have to serve those devastated by the pandemic: to serve in word and deed!

The fourth chapter concerns books. “The best writers are not self-promoting narcissists who demand that we look at them, but those who invite us to look through them at what they have seen, so that we too might share in their experience” (p. 48). Surely, this is a time to read great books, to transcend our isolation though the commingling of ideas. If we read critically, faithfully, we can still find truth in a “‘post-truth’ world” (p. 53). Where books are the tangible evidence of ideas, we still need a framework for dealing with those ideas. Chapter five offers such a framework, a framework in which all of ourselves should be involved. Here McGrath uses metaphors taken from John Mackay, a former president of Princeton Theological Seminary. One metaphor is “the road,” the other is “the balcony,” and both deal with our perception of and participation in reality. The former is the nitty gritty of life where truth is found; the latter is “‘an ivory tower,’” a fiction “that can never be achieved in practice” (p. 63). We may long to see “‘the big picture,’” but we are too temporally limited to be able to do so. The closest we can get to the balcony is see through another’s eyes. This can bring us back to books, but it can also lead us to mentors. Ideas are mere abstractions if they remain divorced from “people who are shaped by them” (p. 68). Traveling this road of the Christian life is more interesting and more real if we travel in company (both as mentor and mentee).

The second section of the book portrays four Christians who were notable for their faith and their intellect. The portrait of Dorothy Sayers is entitled “the creative mind,” and discusses a number of her novels. “Sayers saw her detective novels as being about discerning a pattern within events that pointed to the way in which an intellectual puzzle could be solved” (p. 76). People look for ways to make sense of the world. Sayers’s belief in a rational God gave her a firm foundation from which to explore human actions. By observing the patterns evident in the world, she could discern some of the divine mind behind them. She was also wise enough to understand the limits of human intelligence. “Human logic may be rationally adequate, but it is also existentially deficient. Faith declares that there is more to life than this” (p. 81). Faith also accepts mystery, “something that exceeds reason’s capacity to discern and describe” (p. 83). From Sayers, McGrath turns to C.S. Lewis, a champion of the rationality of the Christian faith. And yet, it was Lewis’s imagination, his creativity, which pointed him to God. “‘Nearly all that I loved I believed to be imaginary; nearly all that I believed to be real I thought grim and meaningless’” (p. 87). Lewis came to believe that his imagination and reason worked in tandem. I particularly appreciated McGrath’s appraisal of Lewis’s apologetic approach: what might at first seem to be argumentative is actually an invitation to view things imaginatively, “to see things in a new way” (p. 89). John Stott and Jim Packer are the subjects of the final two portraits. With Stott, McGrath gives us a model listener to emulate. Stott had the capacity to hear from the culture around him, as well as the cultures of the Bible, “double listening.” He also had one of the Apostle Paul’s gifts, the ability to share the pure gospel with cultural sensitivity, but not syncretism. This is a gift that we pray more and more people of God will find and cultivate.  In Jim Packer, McGrath finds a man whose own theology was completely life changing. “Personal piety can easily degenerate into uncritical thinking about faith, leading us into all kinds of inadequate judgements” (p. 112). Packer was a man who thought biblically and theologically, and this thinking informed his spirituality. What is more, he thought in the company of his own contemporaries as well as the Saints and sages of the Church. He found in Puritanism “the link between theology, prayer and adoration” (p. 116).  I suspect that [re]reading Packer’s Knowing God would be profitable during this season of distancing from God’s image bearers.

The final section, “Journeying in Hope,” contains the texts of four homilies. “Truth, Mystery, and Darkness” explores human limitations, particularly the limitations of human knowledge (p. 123). “Western culture [has] experienced an unsettling transition from Cartesian certainty to Wittgensteinian despair” (p. 126). This transition, however, should not cause the Christian to panic; it is merely an indicator that a robust faith is necessary. We need revelation, “the disclosure of a view of reality that we did not invent and that tantalizingly lies beyond the capacity of human reason to grasp fully” (p. 127). Without faith, without revelation, we are left to the darkness of our own making. “Reason is a wonderful critical tool; but it is an unreliable foundation for truth” (p. 128). So we are back to mystery; God has to be more than we can comprehend. “In the end, our words are just not good enough to cope with the conceptual majesty of God, so splendidly expressed in the theological notion of glory” (pp. 129-130). There is hope precisely because God is more and God is good. In the second homily, McGrath considers “intelligibility and coherence” (p. 131). McGrath was “drawn to Christianity” from the sciences because it allowed for coherence, “a deep belief in the fundamental interconnectedness of things” (p. 133). Science is valuable partly because it deconstructs things and allows us to examine how they function. “Faith is about putting them back together again so that we can see what they mean” (p. 135). We find meaning and deal with ultimacy through the “‘interweaving of narratives,’” which should help us find our place in the greatest narrative of all (p. 136). Hope is the topic of the third homily. “We need hope: not a naive and shallow optimism but a robust and secure confidence that there is something good—there is someone good—who will triumph over despair and hopelessness” (p. 140). From this definition of hope we get to McGrath’s definition of a true believer as someone who understands that our hope of heaven must be active; we must endeavor “to make this world more like heaven” (p. 141). The final homily looks specifically at C. S. Lewis’s hope of heaven. Lewis speaks of infusing the “earth with the fragrance of heaven” (p. 144). Heaven is our true home, so awaiting it is “‘a continual looking forward to the eternal world’” for which we were created (p. 145). Anything less than heaven will not, because it cannot, satisfy the desires of the human heart.