Militant Grace: The Apocalyptic Turn and the Future of Christian Theology 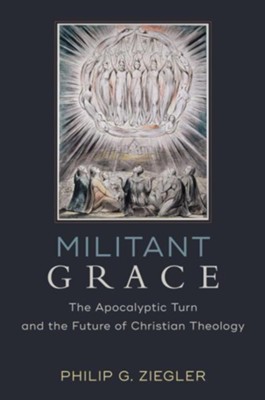 In this book, Philip Ziegler revises and compiles thirteen previous works, overviewing the influence of apocalyptic on theology and biblical studies as well as readings of apocalyptic readings of a variety of theologians. Through these studies, Ziegler shows “…that in pursuit of renewed accountability to the apocalyptic gospel, theology is required to think again about its own forms, methods, and foci precisely in virtue of its distinctively eschatological content (italics original).”

Part One, “The Shape and Sources of an Apocalyptic Theology,” consists of two chapters that provide a foundation. The first establishes the need for apocalyptic in eschatology. Postmodern historicism, motivated by an entropic view of history, has deemed eschatological emphases problematic; however, Ziegler contends that this leads to a salvation that minimizes Gospel transformation, whereas an apocalyptic soteriology brings what Ziegler terms “salvation by catastrophe (p. 9),” emphasizing the beginning of the eschaton in Christ. Therefore, it is important dogmatics be conducted with eschatology of an apocalyptic tenor in mind over historicism, to more accurately capture Scripture’s testimony. The second chapter shows the contributions of Barth to Pauline apocalyptic, concluding with six theses concerning what apocalyptic offers theology, emphasizing the depth of the Gospel by the act of redemption in Christ. The advent of Christ has altered the relationship between God and man by rescuing humanity from the powers of evil, and therefore the Christian life is “…to be understood as militant discipleship in evangelical freedom” (p. 29). This should not lead to speculation or abstraction, but to communities formed around the transformation of Christ, and the expectation that he will return to complete that transformation.

Part Two, “Christ, Spirit, and Salvation in an Apocalyptic Key,” covers five chapters, showing the implications of apocalyptic theology in a number of areas. The first focuses on the kingship of Christ in Romans 8:31-39. Although this passage deals with the present struggle of God’s people, this does not negate Christ’s reign. Because his reign is eschatological, Christ guarantees to lead his people to the new age. This reign delivers humanity from the power of the world to the rule of Christ (taking Käsemann’s conclusion that Paul’s anthropology identifies an individual as one part of the world they inhabit). This means that the deliverance of God’s people is intimately related to Christ’s restoration of the cosmos, meaning Romans 8:38-39 is not hyperbole, but reality because Christ rules all things. Continuing, the next chapter considers the contribution of Christus Victor and implications for Christ conquering evil while humanity was enslaved. While the argument that an apocalyptic rendering of Christus Victor does justice to every soteriological motif in the New Testament could be contested, Ziegler makes a striking case for the significance of this motif in theology and discipleship. Because of Christ’s victory, those identified with him live in service to Christ. The next chapter explains the role of the Spirit in bringing faith within Pauline eschatology, focusing on 1 Corinthians 12:1-3. The indwelling of the Spirit is a repossession of humanity by God, demonstrating that the believer has come under the Lordship of Christ. Through the confession “Jesus is Lord,” the Spirit declares victory over idols and the powers of this world. The next chapter considers the petition for the coming of the Kingdom in the Lord’s Prayer, as it calls for the realization of God’s intent for the universe, paralleling “Come, Lord Jesus” (1 Cor. 16:22; Rev. 22:20). To this end, Ziegler considers the exegesis of this prayer by Calvin and Barth. For Calvin, this petition expresses a desire for the earthly and spiritual kingdoms to be joined together through God upholding his righteousness. For Barth, the Kingdom has been established through the work of Christ, and so, similar to Calvin, the petition is a request for God to extend his reign over creation. The last chapter deals with the approaches of Jüngel and Moltmann to the relationship between divine justice and eternal life over Kant’s vision that humanity conceives of immortality in order to retain the belief of growing in virtue. For both theologians, judgment and eternal life are intimately connected to the Gospel. Because of the work of Christ, the final judgment is not a settling of accounts, but a means to the end of new creation, as Christ has taken judgment on himself in the defeat of death.

Part Three, “Living Faithfully at the Turn of the Ages,” suggests how the Christian relates to law, offers apocalyptic readings of Calvin, Kierkegaard, and Bonhoeffer, and overviews the implications of the apocalyptic Gospel on discipleship. Chapter eight considers an apocalyptic understanding of moral law through the work of Paul L. Lehmann and T.F. Torrance, as both are “…concerned to connect the actuality of human law to the decisive and salutary reality of divine sovereignty, though they differ significantly regarding how this connection is best acknowledged and described” (p. 113). In response to positivism, Torrance argues that moral law is only possible because of the objective reality of God. For Lehmann, moral law must be situated under the realm of Christ. Therefore, moral law should be more concerned with indicative rather than imperative. The next chapter builds from these convictions to focus on ramifications for ethics. Because human wisdom is corrupted by sin, the announcement of the Gospel cuts against the world, meaning discernment of proper ethics apart from Christ is essentially impossible. Therefore, it is necessary to evaluate Christian ethics in light of the coming of Christ, discerning proper actions in light of the indwelling of the Spirit. From here, as mentioned above, the work shifts to focus on apocalyptic readings of Calvin, Kierkegaard, and Bonhoeffer. In considering Calvin, Ziegler shows the understanding of fallen humanity as bound to sin, citizens of the fallen age, requiring humanity to be remade in Christ, linking ethics with soteriology. Similarly, Kierkegaard situates all practice as a response to Christ (“striving born of gratitude,” quoted on p. 161). Therefore, the Christian is to imitate Christ, meaning the existence of a Christian in a fallen world will look unnatural, aligning closely with the apocalyptic Gospel. Last is Bonhoeffer, a figure not typically considered to contribute to apocalyptic theology. However, Ziegler demonstrates the influence of the apocalyptic Gospel on Bonhoeffer’s understanding of justification and reconciliation. The coming of Christ should not cause the Christian to withdraw from the world, nor does it allow for secular exclusion of God. Rather, what God has done in Christ causes engagement with the world. The last chapter offers concluding remarks regarding the significance of discipleship. As established, because of the coming of Jesus, believers have been brought into service of the Lord, and therefore all of life is shaped around that fact, a helpful summary and application of much of what has been suggested.

It could be argued that apocalyptic readings are an accentuation in emphases present elsewhere, but overall this work is a thorough introduction to apocalyptic theology, its place within biblical studies and theology, and implications it offers. While perhaps disjointed due to the nature of the work, there is a structure and development which is quite helpful. For those desiring to understand the relevance of apocalyptic readings, and its significance beyond Pauline exegesis, this work is highly recommended.