No Argument for God: Going Beyond Reason in Conversations About Faith

A Denver Journal Review by A. G. Holdier 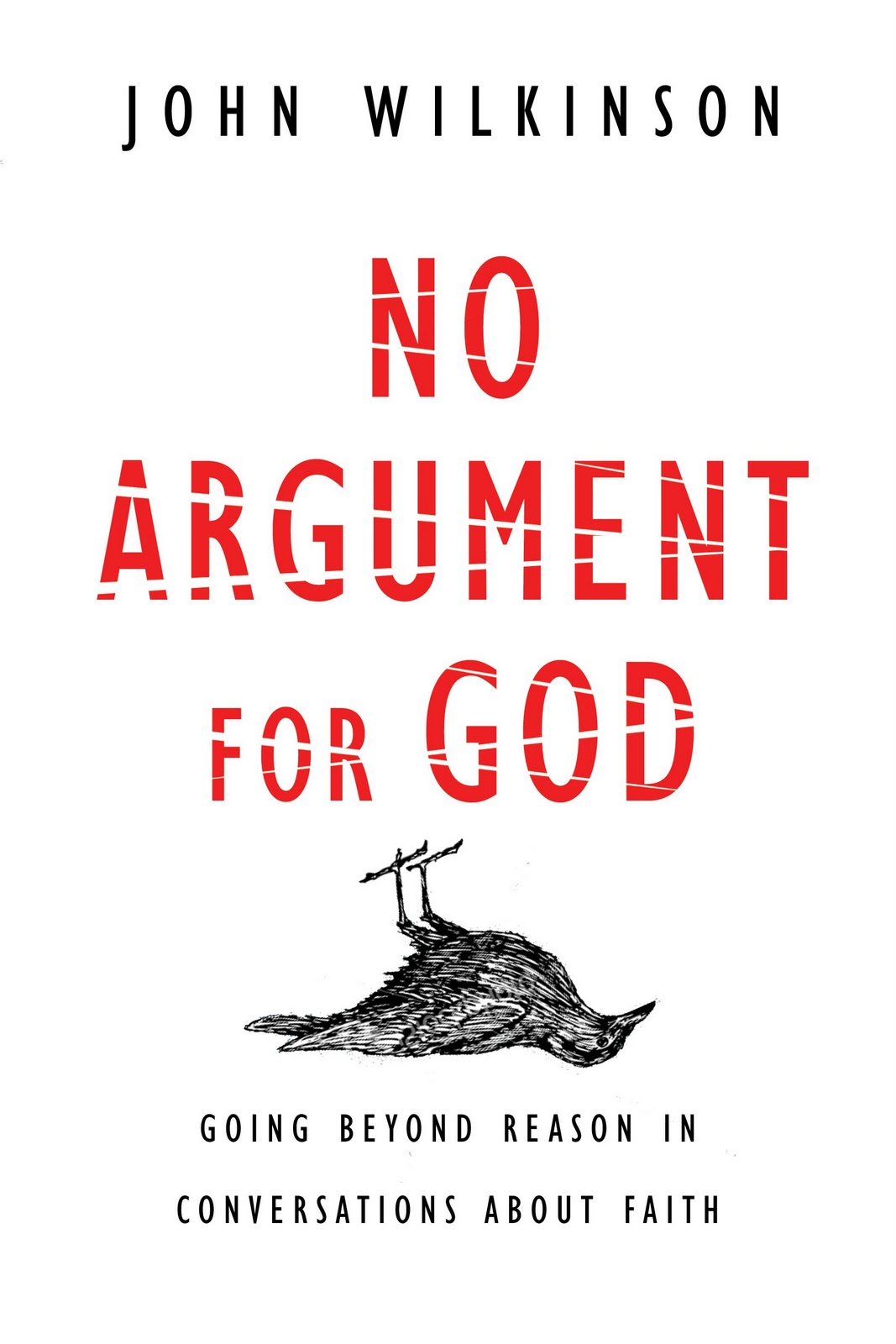 Imagine that your dog is sick. You’ve had this animal for years, loving her more every day, and now she’s in danger of falling prey to some terrible canine disease. Luckily, you know that your local veterinarian has just the right medication to save her, if only you can get her down to the vet’s office. The only problem: your sick animal—somehow—knows your dastardly plan to save her life by (gasp!) taking her to get a shot and refuses to get in the car. Whatever can you do?

The answer seems obvious: you can lie. Start speaking in excited, playful tones about going “on a walk” or to somewhere like “the park” and that mutt will happily jump up into your vehicle, unknowingly bound for medicine, not meadows. You have nothing but good intentions—your beloved dog simply could not realize the danger that she was in—but that does not change the fact that you intentionally led her to believe something that you knew to be untrue.

Which is pretty much what John Wilkinson does in his book No Argument for God: Going Beyond Reason in Conversations About Faith. In the face of increased criticism of the Christian worldview on a popular level, Wilkinson suggests that the apparent absurdity that atheists claim to find in Christian theology is not only true, but laudable and designed by God. A profession of faith should not be a claim that Christianity makes sense, according to Wilkinson, but that precisely the opposite is the case: it makes no sense and is, therefore, obviously from God. In his words, “As people of faith, we need to be okay with what some might call nonsense” (102). According to Wilkinson, evangelism is not a matter of showing that Christianity is true, but rather that it is useful and important for life.

Unfortunately, this “argument from absurdity” (151) is as disingenuous as tricking your dog to get into the car. Wilkinson certainly does believe that Christianity accurately describes reality; to suggest otherwise—or to recommend that Christians should agree otherwise as a method for smoothly opening a conversation about spirituality with a nonbeliever—is simply dishonest.

To be fair, at no point does Wilkinson explicitly endorse a tactic of lying about one’s beliefs for the sake of sparking or maintaining a dialogue. However, his claim to hold to a faith that is “a strain on logic” and “pure nonsense” (156) is, at best, a misleading twisting of words in the nonbeliever’s ear. From an epistemological standpoint, irrationality is no virtue, for to label a proposition as “irrational” is to say that it is held in the absence of any reason. A belief that the dark side of moon smells like bacon, for example, is irrational: perhaps it is true – there is nothing logically inconsistent about the idea – but we have absolutely no reason to think that it is actually the case. And Wilkinson has many reasons to think that Christianity is the case, even if he doesn’t recognize them as such (for example: his immediate experience of and relationship with Christ [102] is one reason that he believes that Jesus is real); to say otherwise is inconsistent with both Scripture and his own noetic structure.

A crucial problem is that Wilkinson redefines many of his key words, skewing his argument away from normal understandings of terms like “rationality,” “reason,” and “logic.” With nods to both Kant and William James, Wilkinson sees both reason and logic as human methods of organizing sensory data into useful perceptions of the world. Wilkinson appears to buy into a staunchly empiricist epistemology that views all knowledge of the world as coming exclusively via our five senses; that “sense data leads to reason, and it all works together to help us navigate through the world” (47). “Logic,” then, is the template that we use to check our arrangements of sense data against our previously held beliefs about the world, which means that (ironically enough, logically) “reason is stunted by the limits of being human” (52) and the things that we humans already know. And, as Wilkinson tells us, “those things that make sense [literally to Wilkinson: are of the senses] are part of what we call “real” or “true,” while things that are nonsense [that is, “are not of the senses”] are rejected” (41).

Instead of that, Wilkinson proposes that God is literally “nonsense” because He cannot be accessed by the five material senses. Pushing back against an understanding of reason that “assault[s] faith by claiming that all truth comes through the senses” (133), Wilkinson says that God is not-sensible, therefore He is not-reasonable. The remedy to this strange collection of definitions seems easy: deny the ultra-empiricist’s claim that all knowledge comes exclusively and always through the senses (which seems obviously incorrect) and the problem dissolves. Regardless, it is still a crude fallacy to try and use such a common term like “nonsense” in such an unusual way—such a tactic can only lead to confusion and misunderstanding.

But that is only one example of Wilkinson’s philosophy of language that is as muddled as his epistemology. Consider his treatment of the word “cold”: “the idea of cold really does not exist outside of human experience. Cold is just a word we have given to atoms that travel at a slow speed….The result is the human experience arbitrarily called ‘cold.’…the idea of cold is a human-centered phenomenon that has no bearing on the world outside of our own minds. Essentially, we make truth because of the effect certain events have on us” (36-37). Again, this is not a difficult mistake to correct: Wilkinson is simply confusing the reality of the objective world with the arbitrary linguistic symbols we use to name facets of that reality. Certainly he’s right to say that “cold” is an arbitrary term for “slow-moving atoms” – no one disagrees with this. It is a mistake, however, to apply the arbitrariness of the term to the experience that the term describes.

He makes a similar mistake about logic when he says that “when we think of truth, we usually have one standard to evaluate it – logic” (33). Again, this is simply incorrect: the structure of our thinking has nothing to do with the truth of a premise we are considering – only the reality of the world in front of us determines truth or falsity. Put differently: validity and soundness are separate concerns.

What this also means is that Wilkinson’s assumption that philosophical Christians are obsessively pursuing certainty is a mistake. Christian philosophers do not assume that “human rationality is capable of leading us to all the answers” (47) or that certainty is ever the absolute goal of Christian theism (79) as if divine revelation in Nature, Scripture, or Personal Experience was unimportant. But Wilkinson has already defined too many terms down into odd places to see this. Reason does not “limit us to our own heads” (57), it’s not simply what seems normal to a human being (31), and it’s not absolutely “unable to answer [existential or theistic questions] because reason is built from the senses, which are tied only to things we observe” (54). To say that something is logical is not to say that we are certain about it or have it all figured out; it is simply to say that we can say something about the thing in question. Not even the scientists that Wilkinson appeals to on page 132 would say that they can possess complete certainty about a hypothesis; it is an empty victory for Wilkinson to write a book to correct a claim that no one makes. Certainly we can speak about things we are not comprehensively certain about; otherwise “God” would indeed be meaningless and Wilkinson’s point would trivialize not only the Bible into pointlessness, but his own book as well.

Wilkinson’s lack of concern for logical consistency does make it hard to pin down exactly what some of his re-definitions are: consider his notion of truth which Wilkinson explicitly contradicts himself about. Initially, he says that “truth is not grasped but manufactured” (38) based on sense data as described above, but Wilkinson later argues that “truth is not made, it shows up” from somewhere outside the individual (75). It is not at all clear which of these mutually exclusive definitions Wilkinson actually prefers.

It is neither possible nor fruitful to catalog all of Wilkinson’s missteps in this book, but one more egregious mistake should be noted: his repeated abuse of other authors’ words. This is not simply a matter of misattributing Whitehead’s famous “footnotes to Plato” quote to William Barrett (93) or eisegeting nonrationality (and a fatal typo) into Cahill (83), but it is as serious of a mistake as it gets when Wilkinson misinterprets Wittgenstein, applying a comment originally about arbitrary language to objective, metaphysical reality instead (69). Indeed, if his citations are any indication, Wilkinson’s scholarship leaves much to be desired.

So, on the whole, this book concedes far too much; as far as this reviewer could tell, Wilkinson essentially accepts every one of the atheist’s metaphysical positions (scientism, materialism, empiricism) and tries to still win the day. Unfortunately, by simply saying “we have no argument, but we have the person of Christ” (160), Wilkinson not only fails to win anything but scorn from an unbelieving skeptic, but fails so expressly against the grain of the Scriptures that call us to always be prepared to give a defense to anyone who asks us for a reason for the hope that we have. Simply redefining terms like “reason” away into unique forms of nonsense (defined traditionally as “rubbish or foolishness”) will get you nowhere.

And to recommend this approach as a tactic for sparking conversation is practically insulting, for if we actually believe that if we are to “move through the world with a different cadence, one in rhythm with God, it can help move our friends to want to encounter the person of Christ for themselves” (160), then we are no better than someone who lies to their animal because it is a dumb animal. We should treat our non-believing friends with more respect than that and engage them as the intelligent, rational, thinking human beings that they are.

That’s what a real, biblical conversation about faith actually looks like.