No Ordinary Marriage: Together for God’s Glory 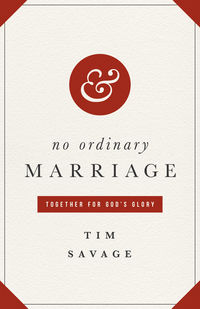 Yes, another book on Christian marriage. The Denver Journal could fill its website with reviews of marriage books, many of which would be worthy contributions to the popular literature on marriage and its crucial role in the Christian’s life, the church and society. The very fact that there are so many books on this topic speaks to the urgency and almost desperation we feel as Christians to defend and provide resources in response to the beleaguered state of marriage, particularly in Western culture.

Is this one anything unique? In some ways, no, but it is still a worthy contribution.

I am a little embarrassed to admit that what drew me to this book was the endorsement on the back cover from Alice Cooper, one of the more disturbing rock icons from my teen years. I assume he is now a person of faith (what a transformation that must be!), and I figured that if he liked it, I have to find out why.

And it was worth the read. It is a solid reflection from a biblical and theological perspective on marriage. Admittedly, this is not a “how-to” book as much as a book that seeks to lay a solid foundation for how couples and the church need to think about Christian marriage and its role in our families and in local congregations.

Much of it I thoroughly endorse and applaud. For instance, I appreciate the profound and compelling message of the book that marriage has a purpose; as stated in the Westminster Confession our chief calling is to glorify God and enjoy Him forever. This is equally true of the role of marriage in the Christian’s life; marriage is intended to glorify God. Relying only on the benefits and passions of marriage to be enough to sustain marriage is ultimately hopeless. Marriage needs a purpose beyond itself, beyond the individuals, and beyond the social and religious convention. It is to glorify God.

While much of Savage’s discussion of the glory of God is powerful and helpful, perhaps he is a little myopic. He states that, “since his [God’s] most salient feature is his glory, we must be able to reflect his glory” (p.32). However, isn’t God’s love at least equally “salient” (Lam. 3:22; 1 John 4: 4, 8), and at least as equally powerful a motivation for marriage?

This is in part acknowledged in Savage’s focus on “cruciform love.” The love that the Scripture requires of us in marriage is a love demonstrated by Christ’s death for us on the cross. I greatly appreciated this emphasis since is it not as richly described in some of the Christian marriage literature. The complex and sacrificial dimensions of cruciform love are not watered down but presented as radical and the stuff of real, on-earth relationships – passionate, indeed, and costly as well.

The chapters on “Fusing Bodies” (the sexual relationship) and “In God’s Church” (marriage in the local church) are challenging reminders of the complexity and purpose of marriage. Surprisingly there is also a valuable chapter on “Single-heartedness” which affirms the role of singleness in the body of Christ, a topic often overlooked in our efforts to uphold marriage.  I also appreciated the numerous quotations from renowned Christians in church history, for example, Martin Luther, Jonathan Edwards, and Richard Baxter. These men of God offer much wisdom about marriage, in addition to their better known contributions to theology and the Christian life.

One minor concern I had with the book is the repeated use of the concept of “fusion.” “Becoming one flesh,” (Gen. 2:24) is described as the individual spouses being fused together. As a marriage and family therapist, the secular literature tends to consider fusion as a loss of individuality within the family system and the marital relationship. This is a sign of dysfunction, otherwise known as enmeshment. I tend to agree with the concern about the concept of fusion and am careful, as I think Scripture is, to avoid this tendency to see married couples as fused, that the spouses’ individuality and uniqueness is eliminated in marriage. Perhaps working side by side with my wife all these years I have become sensitive to the tendency people have to assume that I think the same as Heather on everything and vice versa.

Even more so, biblically, the concept of fusion is a problem. I believe that Adam and Eve, and Ananias and Sapphira, could have made different individual choices apart from their spouses and are held individually responsible (see also Jer. 31:30, Ezek. 18:4, Rms. 6:23). When a couple becomes one, they do not lose their unique, individual identities, giftings and callings. The technical word for this is differentiation and some therapists, some Christians included, see lack of differentiation as the core issue in problematic relationships.  The challenge is to determine how a couple becomes one without losing individuality.

A second concern I have is the position Savage takes on marital roles, specifically the mandate for wives to submit to their husbands and husbands to love their wives as Christ loved the church. Savage does a better job than most to unpack what true submission looks like for wives and the radical model of service Christ gives husbands regarding sacrificial love for one’s wife. At times it reads like a parallel description of mutual submission and he admits this: “In short, both words can be reduced to the idea of sacrificing one’s own interests for the good of the other” (p. 89).  But on the next page, at the end of the two chapters on roles, he introduces for the first time, and for less than a page, the concept of husbands as leaders in marriage: “The husband leads out with Christlike love. The wife responds with church-like submission” (p. 90). Let’s face it, the biblical concept of submission and authority in marriage has been infected with contemporary notions of leadership; the role of leadership for husbands is not in the related biblical passages. Apart from this one page digression into leadership, Savage paints a vivid, even startling picture of what it looks like when spouses mutually submit and sacrifice for one another for the glory of God.

A final area of confusion for me is in the chapter on the place of marriage in the local church. It is best illustrated in Savage’s comment: “Too often we are told that healthy marriages depend on loving communities and too seldom that healthy communities depend on loving marriages” (p. 129). I agree that a loving married couple invested and active in a local congregation “spills out onto other members of the local church” which “generates within the church family such a surfeit of love” that the surrounding world notices to the glory of the Father (p. 129).

The question I have with this emphasis is not whether this is a worthy ideal, but how often what appears to be healthy marriages energizing the church is really the case. So often is seems to me, and this is not acknowledged by Savage, that the local church becomes a place where significant marriage problems are hidden beneath a façade of spiritual activity, or are glossed over by a community driven by appearances and compulsive over-involvement.  Savage seems to be saying that loving marriages are the energy on which a church depends. Lord, help us if that is the case. We cannot afford to absolutize any human relationship (Mt. 22:30). It reminds me of Rodney Clapp’s (1995) book Families at the Crossroads in which he argued persuasively that evangelicals have glorified the family and particularly marriage, placing far too much hope on this institution to rescue the church. This produces, in his view, unrealistic expectations for couples, demeans the essential role of singleness (chosen and unchosen) as a Kingdom value, and fails to recognize the unique giftedness to the local church of couples, singles, and families.

In my Marriage and Family Counseling course at Denver Seminary I will continue to use the Balswicks’ (2006) excellent Trinitarian theology of marriage and family: A model for marriage: Covenant, grace, empowerment and intimacy. In addition, Savage’s book, written in a very readable, accessible style, is a worthy reflection on marriage that will help couples focus their relationship on the goal of giving glory to God even in the midst of their complicated relational lives.