On the Road with St. Augustine: A Real World Spirituality for Restless Hearts 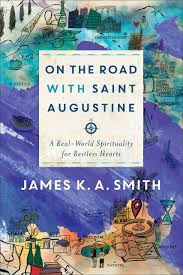 Whenever there is a discussion of the most influential individuals in the history of Christianity, Augustine of Hippo is always somewhere in the mix. As a bishop, preacher, writer and thinker, he was, in many ways, without peer in both his time and our own. And as the centuries have passed, his intellectual stature has only grown both inside and outside of Christendom. Both Protestants and Roman Catholics claim him as their own, revealing his enormous theological influence. Moreover, contemporary non-Christian philosophers and thinkers have often drawn from the depths of the Augustinian well, demonstrating his psychological and philosophical relevance not only to the late classical era but the late modern world as well.

In this wonderful and winsome new book, James K.A. Smith takes us on the road with Augustine thematically, spiritually, and emotionally to help us find true rest for our tired and weary souls. Smith, who is professor of philosophy at Calvin College where he holds the Gary & Henrietta Byker Chair in Applied Reformed Theology & Worldview, serves as a well-informed and astute driver, leading us to a variety of significant places where Augustine himself went historically, morally, and spiritually. As an Augustinian scholar of the first order and a man who, at times, has sought refuge in some of the wayward places frequented by most of us in our quest for significance or peace, Smith knows whereof he speaks. He always takes the great saint seriously, thereby allowing Augustine’s intellectual travails and spiritual experiences to speak into our own wanderings and struggles.

While he uses various elements of the vast Augustinian corpus, Smith primarily relies on The Confessions as the foundation and inspiration for this book. As The Confessions document, Augustine saw himself as something of the consummate prodigal, wandering far from his home in North Africa first to Rome and then Milan in search of wealth, worldly fame and significance. In Smith’s view, and I agree, this makes Augustine, in so many ways, surprisingly modern: an audaciously ambitious young man, seeking validation for his intellect, looking to connect with friends and the opposite sex, eagerly accepting positions of influence all the while doing his darndest to escape the smothering clutches of his Christian mother. But in Milan he met Ambrose, a bishop of powerful intellect whose preaching drew Augustine to the Crucified and Resurrected One, thus changing the direction of his own life and of subsequent Christian history as well.

Smith divides his book into two main sections, the first labeled as Orientation. In the three chapters which make up this portion, he explicates the never-ending human search for value, significance and meaning by invoking Jack Kerouac and other modern authors who have written on these and other related themes. He then paints Augustine as a Contemporary who can guide us as we hit the road seeking to scratch the itch that just won’t go away. This takes us into the book’s second section, magnificently entitled ‘Detours on the Way to Myself’. Here Smith focuses on ten potent elements of human life from freedom to death, with brilliantly insightful chapters on sex, mothers, fathers, and ambition, to name four. By allowing Augustine to lead the way, Smith can pause at points in the bishop’s life to dwell at length on these themes, highlighting how deeply they resonate with us in the early 21st century. Different chapters will, of course, impact different readers in various ways. But I suspect no one who engages this work will remain untouched by its insight, honesty, and sheer applicability.

There are other reasons for readers of The Denver Journal to go on the road with Augustine via James K.A. Smith. For starters, Smith’s breadth of reading and depth of engagement with Augustine, modern philosophical scholarship and contemporary pop culture is simply astounding. He regularly quotes from podcasts like Joe Rogan’s, significant books of non-fiction such as Ta-Nehisi Coates’ Between the World and Me and the works of Martin Heidegger. But what makes this book so engaging is that Smith writes to teach, elevate and encourage us, rather than seeking to put his IQ and prodigious learning on display. In my opinion, this is the type of work which younger scholars in the Evangelical academic subculture should seek to emulate. Truly brilliant, On the Road With St. Augustine reveals the influence that Christian scholars and writers can have if they leverage their learning to address significant human concerns and spiritually wholistic ends. My final admonition in this rather brief and inadequate review is to quote the voice that Augustine heard in the garden so long ago: ‘Take it and read. Take it and read.’ I think you’ll be glad you did.