Paulâ€™s Letter to the Romans: A Commentary 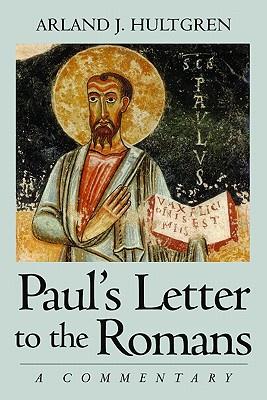 It is rare to see new commentaries on biblical books not in series these days.  It is even rarer to find good, new commentaries not in series.  Hultgren, author of a major commentary on the parables in 2000, also with Eerdmans, and New Testament Professor at Luther Seminary, has defied both trends.  What is more, he has done it on Romans, a letter already awash in scholarly literature and serviced by excellent academic commentaries.

Hultgren revives much of a classic Lutheran approach to the book, one which has fallen on hard times in recent years, both due to the new perspective on Paul and due to the largely Reformed and Calvinist backlash against the new perspective.  Perhaps Hultgren’s closest exemplar would be Doug Moo’s NICNT volume from 1996, but Hultgren is not quite so consistently evangelical as Moo.

A brief introduction dates the letter to Paul’s time in Corinth between 55-58, with Phoebe as the letter carrier.  Unlike those who see the epistle as a response to already existing Jew-Gentile tensions in Rome, Hultgren prefers not to mirror read but to recognize that Paul knew the potential for his offering not to be well received in Jerusalem and for his opponents in other communities to give the Romans the wrong ideas about him.  So his presentation of his gospel is more prophylactic than polemical.  He does want to be helped by them financially as he hopes to pass through Rome on his way to Spain, but he also wants to present his understanding of the gospel so they can hear it straight.  The primary question for Paul is not anthropocentric (how people can become saved and stay saved) but theocentric (how God can include the Gentiles among his chosen people and how he can save recalcitrant Israel).

With most recent commentators, Hultgren sees 1:1-7 as the address and greeting, vv. 8-15 as the thanksgiving and vv. 16-17 as the thesis.  Hultgren leans toward an adoptionist approach to verse 4 despite the potential for “in power” to show the manner of the designation of Jesus as Son of God after his resurrection, not the beginning of his taking on that role.  The “righteousness of God” in v. 17 employs a subjective genitive to denote God’s saving work, while “from faith to faith” means “perceived by faith and directed to faith” (p. 77).

The letter body begins in the next verse.  While righteousness is an attribute of God, wrath is not (v. 18), inasmuch as it comes into play only as a response to human rebellion.  There is general revelation (vv. 19-20), but not natural theology.  Hultgren does not believe the rest of chapter 1 can adjudicate on exclusive, lifelong homosexual partnerships, because he believes they did not exist in Paul’s day; what Paul does condemn is promiscuous homosexual or heterosexual behavior, including that which is abusive, excessive and unnatural.  (One might note that exclusive, lifelong homosexual partnerships barely exist today, either.)

Chapter 2:1-3:20 establishes the sinfulness of all humanity, so those who appear by good works to receive eternal life must represent a purely hypothetical category.  Christ’s cross-work, however, creates a metaphorical mercy-seat (hilastÄ“rion), which Jew and Gentile can alike appropriate by faith and receive redemption.  Buttressed by an extensive appendix, Hultgren properly insists that “faith of Christ” in 3:22 must utilize an objective genitive (hence, “[our] faith in Christ” not “the faithfulness of Christ,” as has become increasingly popular in recent years).

Hultgren goes against the grain of almost all recent interpreters in taking the ambiguous verb forms in 5:1-2 as hortatory subjunctives (“let us be at peace,” “let us rejoice”) rather that merely stating in the indicative the results of justification (“we are at peace,” “we rejoice”).  Under 5:18 he defends what appears to be universalism, despite acknowledging that v. 17 limits the focus “to those who receive the free gift.”  But even if God’s love outweighs his wrath (rightly Hultgren), that does not mean he will coerce those who reject him to enter his kingdom against their will.  Paul’s wish to be damned, if possible, instead of his countrymen (9:3) is incomprehensible if Paul knew they were all to be saved one day anyway, not to mention all the sufferings and persecution he endures in this life for the sake of his ministry (see throughout 2 Corinthians)!

Exegetical common sense returns as Hultgren moves on to chapter 6, though it is never quite clear which side he comes down on in the debate between those who see sin present but never again able to reign in the believer and those who see sin still able to reign but believers for the first time having the resources to reject its reign as well.  He is less than clear on chapter 7 too, declaring both that “when Paul speaks of the tortured ego and its inability to do right (Rom 7:18-19), he is speaking of the life of the believer” (p. 265) and that “in 7:7-25 Paul speaks of what it means to live under the law in order to be righteous, taking insights from his own life experience in the past under the law as paradigmatic” (p. 275).  He does, however, correctly grasp that Romans 8:28 must involve an accusative of respect (“in all things God works for the good,” not “all things work together for good,” or even “God works all things together for good.”).

If Romans 1-8 has particularly addressed the question of how Gentiles can be included among the elect, chapters 9-11 turn to the vexed question of how Israel can be saved.  The answer is explicitly described as a mystery (11:25).  The election depicted in chapter 9 is corporate and perhaps better described as “selection.”  Hultgren explicitly rejects Calvin’s double predestination, but it sounds like he may implicitly reject Luther’s single predestination as well.  Perhaps to bolster his universalism, he renders plÄ“rÅma in 11:12 as “full inclusion” (of the Gentiles) and takes “all Israel” in v. 26a as referring to ethnic Jews.  But he rejects that this occurs as they accept Jesus as their “deliverer” coming out of Zion (v. 26b).  Rather they are saved irrespective of whether they have ever acknowledged Jesus (or God?) or not!

The material in chapters 12-13 focuses particularly on Christian transformation, especially by love.  The gifts of the Spirit mentioned in 12:6-8 can be divided into those expressed through speech (“prophecy”)—teaching and exhorting—and those expressed practically (“service”)—contributing, giving aid, and doing acts of mercy.  Chapter 13:1-7 is not meant to outline a theology of the state (contra Luther) but to relativize the authority of the rulers, because they are ordained by God and therefore not to be deified themselves.  The reasoning in the rest of the chapter is “if you practice love for the neighbor to the degree that you love yourself (and so a particular quality of love is presumed), you will be doing what the commandments teach you to do” (p. 485).

As noted in his introduction, Hultgren suspects that the “strong” and “weak” in chapters 14-15 do not refer to actual groups in Rome (at least that he knows about) but is still part of his apostolic self-introduction, because he did have to face such divisions concerning food in Corinth and special days in Galatia.  The body of the letter does not end at 15:13; the rest of the chapter forms the closing section of the letter body as Paul presents his travel plans.  Chapter 16 should be seen as authentic and original to Romans, except for verses 25-27 where Hultgren thinks the textual evidence too weak.  Phoebe (16:1) is a deacon and benefactor/patron as well as the letter carrier.  Junia (v. 7) is a woman and an apostle, as almost all interpreters now recognize.  Attempts to match other names in the lists of Paul’s greetings with similarly named people elsewhere all prove suggestive but never demonstrable (except probably for Timothy).  Eight appendices, followed by a detailed general bibliography and ample indices round out the volume, which has already presented section-by-section bibliographies of considerable detail en route.

The nature of a short review like this one may make it seem that I have numerous quarrels with Hultgren’s exegesis, but the vast majority of his commentary for which there is no room to summarize here rings true to me time and again.  It is too bad he feels forced into trying on universalism in a couple of places when it fits Paul’s letter (and most of the rest of Hultgren’s own exegesis) so poorly.  And about the only place where his bibliography is one-sided is in his treatment of homosexuality, as he betrays no knowledge of those authors (e.g., Schmidt, deYoung, Belleville) who argue that homosexuality as an orientation was known in antiquity and that Paul’s proscriptions in 1:16-27 cannot be limited simply to certain aberrant forms of homosexual intercourse.

In sum, while I would not recommend this commentary as one of the only two or three a preacher or teacher should acquire or utilize if that is all they can manage, it certainly belongs in a slightly larger group of best, important recent commentaries on Romans and should be consulted frequently.  Given the number of massive Romans commentaries that have been recently produced, including several in two volumes, Hultgren’s is one of the top two or three of medium-length that I would recommend.  Eight hundred pages may not sound like medium-length but almost a half of the volume is occupied with translation, textual notes, overviews, front and end matter and bibliographies, so that the verse-by-verse commentary is actually rather succinct.