Perspectives on our Struggle with Sin: 3 Views of Romans 7 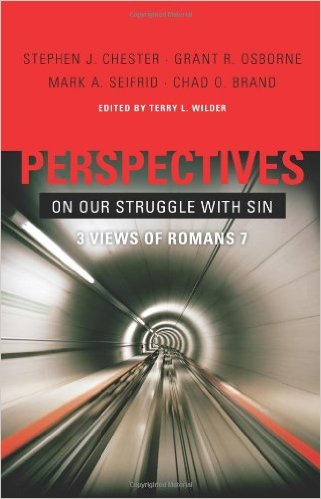 Several publishers have promoted the book genre “point – counterpoint” with numerous entries. B&H is a leading one, and this book represents one of its most recent entries. Terry Wilder (New Testament professor at Southwestern Baptist Theological Seminary) introduces the debate and serves as editor of the contributions of three scholars who defend their positions on how to understand what Paul says in Romans 7. And true to the genre, following each defense, the other two scholars give their (very) brief responses. Then, perhaps uniquely, the book closes with a contribution by theologian Chad Brand (Southern Baptist Theological Seminary) that consists of his conclusions about the theological and pastoral implications of Romans 7. He organizes his discussion under these topics: “Law and Sin,” “Union with Christ,” “The Struggle for Spiritual Victory,” “Pastoral Theology,” “Sanctification and Our Relationship to Sin and the Law,” and “The Pathway to Victory.”

Since the interpretation of Romans 7 has been a perennial storm-center of exegetical debate, this review will present the positions of the three contributors and leave readers to sort out their strengths and come to their own positions—which, after all, is a major objective of these types of books. In reality, those who have read the major critical commentaries on Romans are aware that there are many more than three options that various scholars defend. In fact, in his introduction, Dr. Wilder acknowledges this, and expects that in what follows the three presenters will incorporate in their discussions the main issues and options. Indeed, they do.

To begin, Trinity Evangelical Divinity School New Testament professor Grant Osborne defends the view that Romans 7 portrays the experience of believers after their conversion. They have died and risen with Christ with the capacity to renounce sin. Yet as children of Adam, they continue to possess a sinful nature that dogs their well-intended efforts to do what it right. This sets up the struggle that Paul presents in this chapter. It is his struggle and every believer’s struggle until the return of Christ.

In chapter 2 North Park Theological Seminary New Testament professor Stephen Chester defends the view that Romans 7 presents Paul’s description of his own struggle prior to his conversion to Christ. Paul describes the unregenerate state in which he (and, by extension, others) struggles to do what is right and confesses to sin’s repeated victories prior to the entrance of the Spirit into his life.

Southern Baptist Theological Seminary New Testament professor Mark Seifrid believes that Paul describes the fundamental issue of anyone—believer or unbeliever—who comes into a confrontation with the Law. Without the strength and resources that God provides, a person will always struggle with sin—sometimes having victory over it and often falling short of success.

Each chapter runs about 50 pages while the responses or critiques of the others are remarkably brief. It seems strange that the publisher did not allow for more vibrant and detailed interactions. To me, that is a weakness. I would have loved to see how the others engage more extensively with what they perceive as the liabilities or inadequacies of the views they reject.

Nevertheless, the three authors do present their positions in cogent and articulate essays. Students who follow their arguments (and the rebuttals) will see clearly what is at stake, and how well the three positions handle both the exegetical issues of Romans 7 themselves, but also how well their explanations demonstrate how Romans 7 fits into the narrative of Romans 1-8, crucial criteria for any view that claims to be correct.