Poetic Ethics in Proverbs: Wisdom Literature and the Shaping of the Moral Self 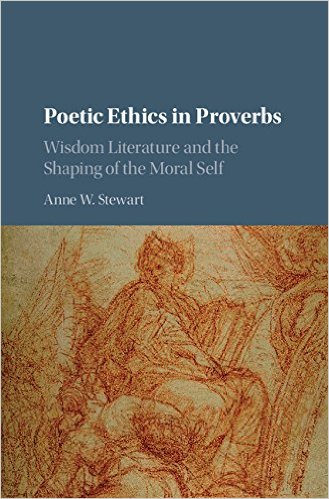 Have you ever wondered why Proverbs is embedded in poetry? The book is commonly associated, qua wisdom literature, with practical skill and the intellect; yet poetry is just as often correlated with the aesthetic, the imaginative, and the emotional. Why, then, is a book so “pragmatic” and “cerebral” so poetic? Where’s the prose?!

This is one of the driving questions behind Anne Stewart’s invigorating new monograph, a revision of her 2014 doctoral dissertation written under Carol Newsom and Brent Strawn at Emory University. As the title suggests, the author contends that Proverbs’ literary form is anything but incidental to its ethical and didactic purposes. Instead, the poetry of the book “makes an important contribution to the way in which the book seeks to shape character. Indeed, through its poetic form, Proverbs appeals to the whole human person, attending to his emotions, motivations, desires, and imagination, not simply his rational capacities. In so doing, the book indicates that character formation is more than an intellectual project and, consequently, demands more than appeal to logical reasoning” (pp. 3–4). With such a multifaceted means of formation in view, Stewart insists that Proverbs exhibits a more complex view of personhood and pedagogy than has often been acknowledged. Hence, “[o]ne of the primary aims of this study is to consider the moral and intellectual assumptions of the book, particularly with reference to its view of the moral self” (p. 8).

Apart from the introduction, the book is divided into three main parts. Part I, “Character and Poetry,” devotes a chapter apiece to character ethics and the characteristics of proverbial poetry. While adopting character ethics as a fruitful avenue of research, Stewart nonetheless challenges the centrality of narrative in such an approach, both as a literary genre and a conception of selfhood. “A significant shortcoming of much scholarship on character ethics,” she argues, “both within and outside of biblical studies, has been an oversight of the unique contributions of poetry to the formation of readers. With respect to the book of Proverbs specifically, neglecting the poetic form causes one to miss the effect of the text’s literary artistry upon the formation of the student” (p. 26). Such an effect lies in part in the propensity of poetry to fuse instruction with wonder, a sharing in delights with an imparting of insight. Accordingly, it exemplifies something of the nature of learning. “Viewed in this light, the poetry of Proverbs is . . . a central means by which the sages teach one how to think, to discern, and to seek wisdom” (p. 42). Specifically, Stewart points to the ways in which parallelism, sound play, terseness, parataxis, and figurative language aid memorability, engagement, aesthetic appreciation, and a slowing down of the learning process. She also illumines the power of alternating voices of address to form identity and shape desire, as well as the profound role that love poetry plays in the book. In this way, the poetic features of Proverbs are not simply literary embellishments, but also sophisticated didactic strategies.

With this methodological foundation laid, Part II examines four primary patterns of character formation in Proverbs, devoting a chapter to each. These “models of mûsÄr” (Heb., “discipline”), as Stewart coins them, include rebuke, motivation, desire, and imagination. Here the author is intent on challenging the so-called “simplicity thesis,” whereby the worldview of the book is depicted as simplistic, rigid, and naïve, especially when compared to Job and Ecclesiastes. Accordingly, she finds in the concept of mûsÄr evidence of “a sophisticated moral psychology that presumes the complexity of the human person,” a psychology that extends beyond verbal and physical correction to the formation of the student’s intellect, emotion, and perception (p. 78). The model of rebuke, for example, lends credence to the notion that character formation requires both internal and external agency (i.e., innate receptivity and discipline), a perspective which the author terms “educated moral selfhood.” The model of motivation demonstrates that humans are self-motivated beings, propelled by a variety of positive and negative stimuli, such as wealth, honor, protection, and life, as well as their counterparts: poverty, shame, danger, and death. The model of desire, further, recognizes the paradox of desire as a fundamental reality of the human condition. As a “crucible of formation,” it can be a potent force in the cultivation of character, yet at the same time dangerous and destabilizing, even as it is causative of both intense pleasure and deep pain. The model of imagination, lastly, evinces a variety of moral prototypes and metaphors that seek to develop the student’s moral imagination. As the poetry unfolds, he is equipped to contemplate moral alternatives and to discern how best to apply moral precepts in new situations. In each case, Stewart draws upon both the sayings and the longer poems of the book to illustrate the poetic patterning of the model under consideration.

By way of conclusion, Part III stresses the import of Proverbs within the larger character ethics project. Here Stewart has in mind two contributions in particular, viz., (1) the distinctly poetic manner of character formation in the book and (2) its challenge to the so-called “exclusivity claim,” advanced by the likes of Stanley Hauerwas, regarding the role of narrative in ethical formation. While Stewart acknowledges certain narratival elements in the book, she argues that it resists a clear linear plot and thus that it is rather episodic in orientation. “With its literary form, it enacts a cyclical process of formation that resists consummation. In this way, the poems themselves keep the student ever in the midst of the pursuit of wisdom” (p. 212). In other words, the lack of emplotment is hardly incidental; instead, it is revelatory of the very nature of wisdom itself.

Despite a few relative weaknesses, Poetic Ethics in Proverbs is a brilliant and compelling book, well articulated, full of fresh insight, and defended in a critical yet irenic fashion. Conversant with the best of wisdom studies and a large swath of ethical and literary theory, Stewart succeeds in advancing our understanding of Proverbs, Hebrew poetry, and character ethics in significant ways. Her discovery of the ethical and didactic significance of the book’s poetry, as well as her keen attention to the affective and sensory dimensions of the text, are particularly noteworthy.

The book is not without its omissions, however. One wonders, for instance, why emotion did not receive the same chapter-length attention that desire does. These are related phenomena, to be sure, but discrete enough to warrant separate treatment. Similarly, one could also wish for a discussion of other literary features that figure in poetry, such as hyperbole or mirativity. The omission of Hebrew vowel markings, further, is a curious feature of the book, especially given the importance of sound play in Stewart’s argument. Despite such perceived weaknesses, however, I recommend the book very highly to anybody wanting a serious grounding in Proverbs. Stewart advocates for a more sophisticated, constructive—indeed, wiser—approach to the very wisdom she so admirably elucidates, and thus is to be congratulated on a job very well done indeed.