Prepositions and Theology in the Greek New Testament 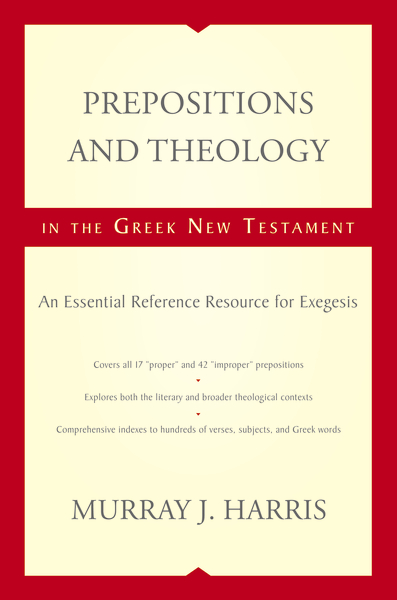 When I was in seminary at Trinity Evangelical Divinity School in the late 1970s, Colin Brown’s magisterial three-volume New International Dictionary of New Testament Theology was hot off the press.  In the back of volume 3, already overly large due to lengthy indices that would eventually be separated off as volume 4, was an enormously useful appendix on prepositions by Murray Harris.  Each of the Greek prepositions found in the New Testament was listed in alphabetical order, followed by comments about its range of meanings and extended discussions of theologically crucial texts in which it was employed.  Harris had just left Trinity, where he had been professor of New Testament, to become the warden of Tyndale House, Cambridge, so his writings were particularly highly touted.  Now, in retirement in his homeland of New Zealand, Harris has expanded this study into a full-fledged book.  Although it is a bit surprising to find its subtitle as “An Essential Reference Resource for Exegesis”—the kind of commendation one would expect on a back-cover blurb rather than as part of a book title itself—the book does merit the label.

The heart of the book—chapters 4 through 20—proceeds alphabetically through the seventeen proper prepositions, discussing their range of meaning, exegetically interesting or controversial passages in which they appear and their usage as prefixes for compound verbs.  Revelation’s intriguing depiction of Jesus appearing á¼€νá½° μÎ­σον God’s throne shows Jesus as both one with and distinct from the Father.  Combined with the word for ransom in Mark 10:45, “for (á¼€ντÎ¯) many” carries the sense of “in place of” and refers to Christ’s substitutionary atonement.  Although it is not used that way elsewhere in the New Testament, Î¬πÏŒ, in Hebrews 5:7 is causal, yielding the sense that Jesus’ prayers were heard “because of his godly fear.”

“Through (διÎ¬) the Spirit” in Acts 21:4 allows for the Tyrian disciples to accurately prophesy Paul’s coming imprisonment in Jerusalem, without ascribing to the direct word of the Lord their resulting pleas that Paul not go.  “For ever and ever” idiomatically translates εá¼°ς τοá½ºς αá¼°á¿¶νας τá¿¶ν αá¼°ÏŽνων (unto the ages of ages), suggesting that eternity can be thought of as an unending accumulation of unending ages.  “From faith to faith” (á¼κ πÎ¯στεως εá¼°ς πÎ¯στιν) in Romans 1:17 may suggest that God’s righteousness is both based on faith and leads to faith.  No uniform meaning may be ascribed to Paul’s common “in Christ” (á¼ν Χριστá¿·); depending on the context it can refer to incorporative union, agency, mode, cause, location or sphere of reference.

Space prohibits examples of each of the seventeen proper propositions, though it is worth highlighting Harris’ treatment of all the σÏν-compounds  in Paul relating Jesus’ experiences to believers’ experiences at the beginning of, throughout and at the consummation of their Christian lives.  His discussion of the virtual collapse of the use of πρÏŒς with three cases in classical Greek to almost exclusively the accusative in Hellenistic Greek is also particularly useful, enabling a translation of Jesus being πρá½¸ς τá½¸ν θεÏŒν in John 1:1 as “was in fellowship with God.”

Closing chapters include an extended treatment of prepositions with “baptize,” prepositions with “believe” and “belief/faith,” brief definitions of the forty-two improper prepositions and a very select set of examples of their more theologically significant usages.  Particularly important here are Harris’ treatments of 1 Cor. 6:18 (á¼κτá½¸ς the body means that all other sins do not involve the whole person the way the sexual act with the wrong person uniquely does), of Luke 17:21 (á¼ντá½¸ς the Pharisees does not mean the kingdom is within them but in their midst) and of Matthew 1:25 (á¼•ως οá½— suggests Mary and Joseph did have sexual relations after Jesus was born).

In light of the hundreds of passages discussed throughout the book, any reviewer will inevitably demur on the translation or exegesis in at least a few instances.  I don’t see why the exegete must choose between Christ as the goal or end of the law in Romans 10:4 or why one couldn’t affirm both that one is righteous by faith and that one must live by faith in Romans 1:17 and Galatians 3:11.  Given the consistent pattern of boasting “in” something referring to the object of the boast, I don’t see why James 4:16 and Romans 2:23 shouldn’t conform to the same pattern.  I wonder if Galatians 5:23 (“against such things there is no law”) doesn’t more likely mean “these things can’t be legislated” rather than Harris’ “there is no law that restrains such virtues.”  And I find the chiastic approach to Acts 2:38 (believe [A] and be baptized [B] in the name of Jesus Christ [B] for the forgiveness of sins [A]) the better way to avoid baptismal regeneration than translating εá¼°ς as the unusual “upon” rather than the common “for.”

Such demurrals, however, occur remarkably rarely, perhaps because I cut my teeth on the shorter predecessor to this volume in my own Greek studies and found it so helpful and compelling.  Students and scholars alike are massively in Harris’ debt for this update and expansion of his original appendix.  Although the price seems high for a light-weight medium-sized hardback, it is well worth the investment.  Studies of the Greek New Testament avoid Harris to their own detriment.