Reading and Understanding the Bible 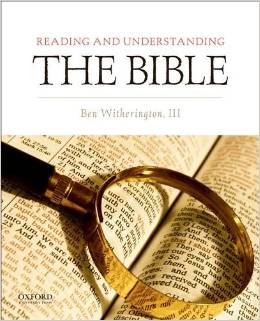 The prolific pen of Ben Witheringon has produced yet another work.  This time we have an invitation to read the Bible that includes Witherington’s reflections on the Old as well as the New Testament.  The first two pages after the Table of Contents contain a map of exclusively New Testament sites and a list of seven abbreviations that are primarily New Testament.  Thus there is a privileging of the latter part of the Christian Bible although this should not dissuade any reader interested in the subject.

The first half of the book, “Surveying the Terrain and Studying the Map,” introduces the reader to major aspects of reading the Bible.  The first chapter encourages readers to plunge in, despite difficult texts (Leviticus is always the example used and Witherington is no exception here).  After an old anecdote warning us not to seek God’s will by randomly selecting texts (“Judas went and hanged himself” – “Go and do likewise”), our author invites us to grasp the general story in his second chapter, “The Grand Narrative of the Bible.”  This leads naturally to a discussion of history and biography as characteristic of the backbone of the biblical text, especially with the history of the Old Testament and the biography as found in the New Testament.  In this manner the book introduces the reader to genres and that leads Witherington to write about figurative language, legal texts, parables, prophecy, and the orality of the material found in the Bible.  Perhaps at this point Witherington could have placed a bit more emphasis on the fact that rhetoric and poetry may originally be written as well as passed down orally for periods of time before finding their way onto a written text.  The final two chapters of the section examine social backgrounds of the New Testament and the literary structures and messages of the four gospels and of Acts.

The second half of the book encourages us with “Unearthing the Treasure.”  Witherington exhorts us to interpret Scripture by Scripture.  Under the Reformation slogan, sola Scriptura, he warns against placing reason, tradition, or experience on a level of authority above that of the Bible.  The chapter on application informs the reader that principles remain constant while practices change.  In addition to law and authoritative teaching, narrative also provides guidance, whether to encourage us to follow the godly examples or to live differently from the sinful examples.  For Witherington, the positive teaching comes when we find repeated patterns in narrative.  Accounts in Acts 2 and 4 exemplify this with their descriptions of early Christian worship and fellowship.  This principle seems explicit already in the Old Testament.  Legal texts such as the mostly word-for-word duplication of the Decalog in Exodus 20 and Deuteronomy 5 imply a special importance and authority.  Narrative texts such as the Assyrian siege of Jerusalem and God’s deliverance through Hezekiah’s faithfulness also have a similar duplication in 2 Kings 18-19 and Isaiah 36-37, with a third description in 2 Chronicles 32.

From here Witherington leads his readers into guidelines for interpretation according to genre:  history, psalms, Isaiah, Jesus’ teachings, and Paul’s words.  Historical narratives require an appreciation of what is human as the tales unfold in an authentic fashion.  We must ask who speaks so as to understand whether God gives authoritative guidance or whether we have human opinion.  In the psalms’ chapter, various types of psalms are discussed with more detailed reflections on Psalms 8, 22, 23, and 139.  The imprecatory statements of the latter are means by which the Psalmist connects personal enemies with God’s enemies.  For Jesus’ teaching, Witherington examines the structure of some of his prophetic statements and the means of interpreting the parable of the Good Samaritan.  In considering the Good Samaritan, one begins with the historical and cultural context and then seeks to understand and apply the story.  The chapter on Paul considers how the apostle understands Jesus in Philippians 2, with special reference to parallels with the Suffering Servant and other texts of Isaiah 40-55.  The reflections of Paul on his life provide an example for moving forward to maturity and reject a superficial reading and interpretation of his work.

The chapter on “Next Steps” discusses bibliographic helps for further study of the Bible.  It also encourages patient use and comparison of more than one modern translation and commentary in obtaining a balanced understanding of the meaning of the text.  The final chapter focuses on the formation of the canon.  This is an important question that cannot be avoided where a sacred book is concerned.  Witherington’s discussion of the Old Testament canon’s formation is useful as a basic survey of the evidence of Christian and Jewish sources. The Qumran evidence is discussed and good cautions are presented.  Melito of Sardis is an important early Christian witness but he probably did not cite the Wisdom of Solomon as part of his list of Old Testament books. In fact, this reference comes from Eusebius who elsewhere indicates that others in the second century church also designated the canonical book of Proverbs as the Wisdom of Solomon (as opposed to the apocryphal work by that name).  A discussion of issues surrounding the canonicity of the Old Testament apocrypha would have been appropriate at this point.  For the New Testament, Witherington has provided a strong case that demonstrates the emergence of the canon from the Christian community itself and not from the later pronouncement of a council or emperor.  An epilogue to the work provides some practical points for choosing a Bible translation.

Figure 4.1 on p. 35 is not an “Ancient Hittite Treaty or Covenant Document.”  It is not Hittite.  It is Luwian.  The “full scroll of Isaiah,” 1QIsa, was not found in Cave 4, contrary to caption on Plate 2 in the section of color photos.  It was found in Cave 1 as its designation indicates.

The book is a well-written introduction to the reading of the Bible, designed to encourage this practice in a biblically illiterate world and to guide the beginning reader better to understand and interpret the sacred text.  I would recommend this book and hope that it will enjoy a wide distribution so that its important message may revive and strengthen Christians and the church today.