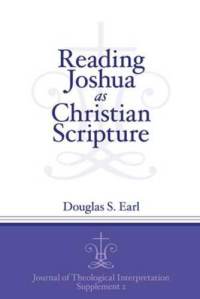 This revised Ph.D. dissertation represents an attempt to interpret the theological value of the book of Joshua as historicized myth.  Myth is a difficult category to identify as it carries a variety of disputed connotations and denotations.  Earl opts for William Day’s definition as a heuristic device.  This lengthy interpretation of myth includes terms such as complex network, stories, graphic imagery, moral and political values, culturally important, individual experiences, and natural and cultural orders.  After elaborating on theorists who use these concepts, Earl considers Joshua in terms of cultural memory, observing the value of the history of Christian interpretation, especially the patristic period.  Earl then applies myth to the Christian interpretation of Joshua by denying the book’s historical value and asserting that the theological emphases are entirely separate and the true focus of importance.

Earl sets the reading of Joshua in a context that is “faithful and fitting” to both the Christian tradition and the biblical canon.  Joshua testifies to divine manifestation in some way, but that way is neither clear nor historical.  As an example of how the text cannot function as history, Earl cites Joshua 2 and 6.  On the one hand, Rahab’s house is preserved, but, on the other hand, the wall is destroyed completely.  The “thrust of the narrative” requires complete removal of the wall.  Thus a partial removal, wherein that part of the wall remained that contained Rahab’s house, misses the point.  It can only be understood as a contradiction and not a communication of history.

However, I would suggest that a careful reading of Joshua 2 and 6 leads to a different evaluation.  There is a repeated emphasis in these chapters on Jericho’s gate (and walls) closed to Israel and God (2:5, 7; 6:1), and on Rahab’s window opened (2:15, 18, 21).  The gate identifies resistance; the window accessibility.  Thus the walls must fall before God and his people; but they have already fallen in Rahab’s case, by her own doing and her acts of faith.  One may go further and ask, If this is a contradiction, on what level is it resolved?  By Earl’s definition, whatever “type” these walls illustrate, anything that remains standing must contradict the view that all has fallen.  It seems that any typological universe interpreting these symbols faces a contradiction.

For Earl, Joshua preserves substantially Deuteronomistic and Priestly traditions.  He also lists differences between Joshua and conquest accounts, presumably to remove any connection to the biblical book and what some view as historically relevant sources.  Yet no modern scholar, including those he cites, argues that the historicity of Joshua is proven by the ancient Near Eastern comparative sources.  They only suggest a similarity in the narrative structure of the sources and of Joshua.  Overall, the literary form of the work is best compared to ancient Near Eastern land grants (cf. e.g., R. Hess, “The Book of Joshua as a Land Grant,” Biblica 83 (2002) 493-506); something that Earl does not address.

Earl spends a significant amount of his work on the biblical herem, often understood as referring to banning from common usage, to devoting to destruction, and to dedication to God.  Earl divides this into a variety of subcategories:  priestly vs. deuteronomistic; properly vs. strictly deuteronomistic; etc.  In discussing the usage of herem in the Moabite stele, he does not address André Lemaire’s reading of the line on the text that eliminates the hapax (ryt).

Perhaps the most useful section of the book is the second half where Earl does a reading of Joshua and pulls together the insights of a variety of ancient commentators.  Thus God’s charge to Joshua (ch. 1) quotes Origen on the mastery of virtues over vices, and Calvin on the exertion of our efforts to fight Satan.  However, it seems to miss the repeated emphasis in 1:5 and 9 on the presence of God as a sure means by which God will support Joshua and Israel.  Again, in the story of Rahab a great deal of effort is devoted to the suggestion of sexual imagery.  Yet surely the emphasis in the narrative is on the great risk Rahab takes and on her faithful confession as well as actions.  Earl does mention some of this.  His examination of the literary message of the book is filled with insights and ideas, some borrowed from ancient Christian interpreters and developed some from recent studies.  A concluding chapter summarizes many of these findings.

The book is worthwhile reading for the review of much earlier interpretation in Church history.  However, it falls short of receiving this reviewer’s full endorsement because there are too many assumptions that separating history from theology is the correct way to derive the most value from a reading of Joshua.  This reviewer demurs, because it seems to be a false dichotomy.  As the historic acts of God’s salvation and preservation of Israel form the center of Rahab’s confession of faith in 2:9-11; so the historical claims to the text should be taken seriously if we are to ground its message in history and to treat it in terms of its own claims.  As noted in the example above, Earl’s claims to find contradictions in the text are not without answers.  Here history, theology, and literature form an integrated whole that bear witness to the nature of God’s salvation in all areas of human experience.