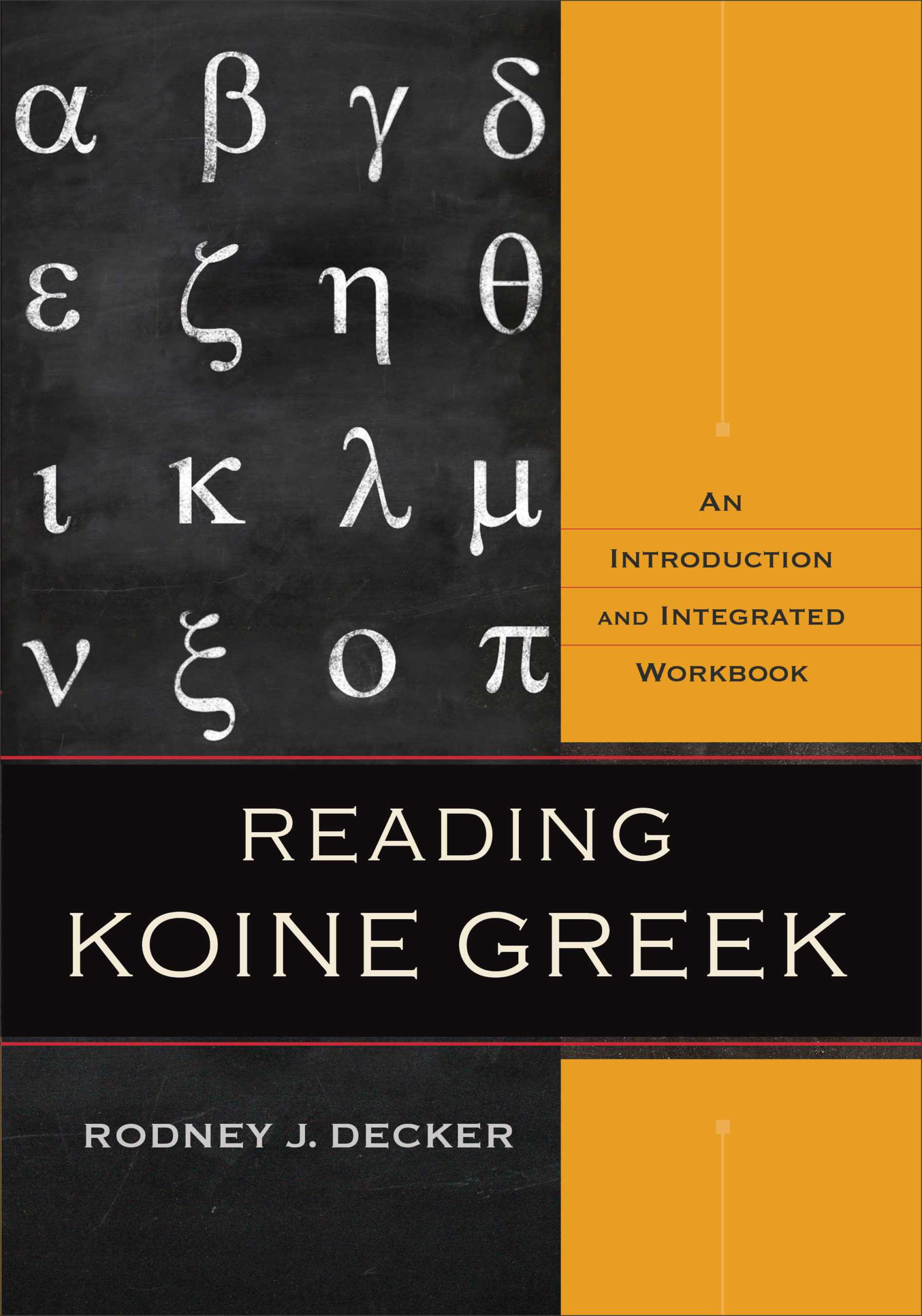 Rod Decker contributed greatly to the study of Koine Greek; he will be sorely missed. Reading Koine Greek has the potential to inspire generations of students to follow his lead. His style is fluid and easy to follow. He discusses even difficult material in a disarmingly accessible way, as only one with an almost encyclopedic knowledge of Koine Greek as well as a facility with colloquial English can. I hope his book gets the attention and wide use it deserves.

As the title suggests, Decker’s aim was to enable people to sit down and really read Greek: the NT to be sure, but also, the LXX, the Pseudepigrapha, and the Apostolic Fathers. He believed, and I agree with him, that readers who have a feel for the thought world of the Koine period and can navigate texts unfamiliar to the average seminary student will bring a level of understanding to what they read, the NT in particular, that is sadly beyond the many who don’t. To this end, the book is meticulously researched and interacts, with Decker’s usual skill, with cutting edge linguistics. He even provides Randall Buth’s compelling alternative to, along with, the standard Erasmian pronunciation. The integrated workbook exercises are another bonus, especially because, like Decker’s examples of grammar and syntax, they are not drawn exclusively from the NT.

After an informative, brief history of the language and overview of the alphabet, accents, and pronunciation, Decker begins (Lessons 2-4) with first and second declension nouns, articles, pronouns and their cases (the vocative is covered in Appendix D). His discussion of the nominative and accusative cases is functional and very basic (nominative = subject, accusative = direct object), but that of the genitive and dative is more nuanced. He calls the genitive restrictive (after a bridge-building paragraph on the English possessive) and offers a number of examples of ways the case restricts head nominals (p. 47-48). Concerning the dative, he notes that the case designates “various relationships within a sentence,” the most frequent of which he lists (p. 53). After reminding the reader that English has two articles, Decker is careful to point out that Greek has only one, moreover that it should not be identified as a definite article.Very helpful is the fact that adjectives (including the adjectival uses of αὐτός) and adverbs are tackled in the same lesson. And unlike many first-year grammars, he mentions adjectives modifying anarthrous nouns and provides solid treatment of the comparison of adjectives and adverbs. Also above and beyond what one might expect from an introductory grammar is the lesson on conjunctions. Not only does he look at the major conjunctions, but he also offers “clues to sentence structure” (p. 133). In other words, he makes students aware of the basic patterns of word order they will encounter as they read more Greek.  In Lesson 11, he includes a good explanation of third declension nouns whose stems end in stops and liquids. For the remaining three stem types he merely offers paradigms.

In Lesson 5, he introduces verbs humorously with the present tenses of λύω, “the lion—King of the Verbs” (complete with picture, p. 79) and εἰμί. He doesn’t dive into verbal aspect theory in his first lesson on verbs and takes a gentle approach that I hope will win over some who remain skeptical about aspect. In fact, he doesn’t even mention verbal aspect in the lesson. He merely notes that in English verbs have tenses related to time, whereas in Greek time is more a matter of contextual clues than tense-form selection. In Lesson 7, the aorist is introduced as the most-commonly-used, default tense-form that “simply refers to a situation in summary without indicating anything further about the action” (p. 120). Before this basic definition, however, Decker chose to say first about the aorist that it carries “the main story-line in narrative” (p. 117). That is, he planted a seed about how to read stories long before providing any detailed explanation of perfective aspect. That explanation comes in Lesson 13, “Verbal Semantics,” after students have seen quite a few verb forms in the exercises. The lesson incidentally is the first in Part 3 of the book, which focuses on verbs. Along with the three aspects (perfective = action viewed “as a complete event, without commenting on whether or not it is a process,” imperfective = action viewed “as a process” and stative = action viewed as “a state of affairs (a condition) that exists, with no reference to any progress and that involves no change,” pp. 224-225), including a fine paragraph distinguishing aspect from Aktionsart, Decker unpacks voice (“deponent” verbs are described as “middle-only” in Lesson 15 and defined as generally having “inherent middle meaning[s]” p. 252) and mood. Lessons 14-21 treat the indicative mood (including stops, liquids and contract verbs), and Lessons 22-29 are devoted to non-finite verbs and the non-indicative moods. The final lessons (30-33) cover conditions (both formal and informal), discourse and μι verbs.

In addition to his approach to verbal aspect in general, Decker’s handling of participles in particular will interest teachers considering using his text. He states succinctly, “The key to the meaning of a participle is verbal aspect” (p. 395). Not surprisingly, he also affirms that adverbial participles deal with time relative to that of the main verb, with present participles tending to indicate contemporaneous action and aorist participles tending to indicate prior action. He skillfully explains more categories of adverbial participles than most introductory grammars, even if many of them are under the heading, “Advanced Information for Reference.” At the same time, his caveat regarding the standard adverbial labels (causal, modal, temporal etc.) bears repeating: “These categories are summaries of the types of contexts in which the participles are used; they do not describe different kinds of participles” (p. 395). If that were not enough, he continues, “Referring to a ‘causal participle’ is just a shorthand expression for ‘an adverbial participle used in a context where the participle is clearly related to the main verb in a causal way’” (Ibid.). One hopes this will take some pressure off students who can’t find (even or only) one “clear” relationship between a participle and its main verb.

There are little gems to be discovered throughout the book. The “Greeklish” on page 30 contributes an entertaining way to get students to focus on case endings instead of word order (e.g., Billον hit Tomος) to determine the grammatical function of nominals. A boon for many teachers (and all visual learners) is the fact that Decker begins the practice of incorporating grammatical diagrams into the text in Lesson 3 (the final lesson on cases). And along the same lines, he explains new material by analogy, or lack thereof, to English grammar and syntax.  Instead of mice, lions or the more traditional circle, Decker illustrates the spatial prepositions with a wormy apple (p. 158). Right from the start with prepositions, he also makes it abundantly clear that they usually have wide, and often overlapping, ranges of meaning (p. 156). The mnemonic devices, “Saucy a, S own sin os” for third declension endings and “Stealing Chickens” for εἷς, μία, ἕν, though perhaps a bit odd, are also just plain fun. And how wonderful that he included Robertson’s (who in turn borrowed it from the classical scholar Voss) comparison of a participle to a mule! I am glad that in an otherwise thorough, scholarly grammar there are expressions of fun and humor. The book is well organized and visually pleasing.  It appends extensive reference charts and a nicely detailed glossary of Greek vocabulary. As a Greek teacher of 30 years, I highly recommend Decker’s work and plan to begin using it in my own classes.