Reading the Historical Books: A Student’s Guide to Engaging the Biblical Text 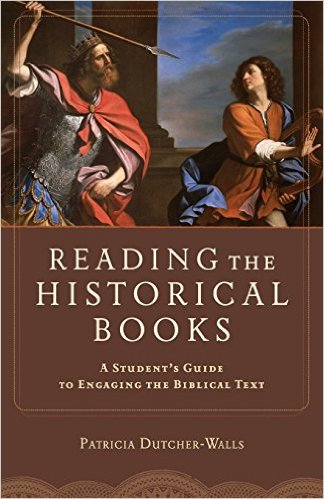 In 1981 Robert Alter, a professor of Hebrew and comparative literature at the University of California, Berkeley, published a provocative new book, The Art of Biblical Narrative.  In it, Alter moved beyond the older paradigms of reading Old Testament narratives by arguing that the authors of these stories were literary geniuses who carefully constructed what they wrote in order to inform, impress and entertain.  Alter’s literary presuppositions were criticized by other biblical scholars, most notably those who hold to some concept of divine inspiration, but his approach set off a revolution in the study of Old Testament narratives.  Over the ensuing decades other works on narrative literature poured forth, not the least of which were Narrative Art in the Bible (1989) by Shimon Bar-Efrat and Reading Biblical Narratives (2001) by Yairah Amit.

Patricia Dutcher-Wells is well versed in the literary approach to Old Testament narrative as evidenced by her volume Reading the Historical Books: A Student’s Guide to Engaging the Biblical Text.  Her goal is to help readers, particularly students who are unfamiliar with the historical books of the Old Testament, become sensitized to the various forms, styles, assumptions and background that the original audience took for granted but which are unfamiliar to most of us in the 21st century (p. xvi).  This is a noble task and, overall, she succeeds quite admirably.  Her writing is lucid and she illustrates difficult points with relevant contemporary examples.  She also includes some helpful sidebars along the way to help us reflect on the intent of various biblical authors as they composed their respective histories.

In her effort to help us read the historical books (specifically Joshua, Judges, I & II Samuel, I & II Kings, I & II Chronicles, Ezra and Nehemiah) Dutcher-Wells accurately lays out her approach in five succinct chapters.  These cover, successively, the content, story, interests, history and the shape of history in various Old Testament accounts of the life of Israel.  Along the way she offers a number of insightful comments from numerous texts to help us understand what the biblical authors were doing and then wraps up her argument with a final chapter that tries to define a biblical historiography.  The book is intentionally reader-friendly and, in my view, accomplishes exactly what the author wanted.

Even better, she makes a number of astute observations about the context of these books starting with the fact that we cannot understand what the authors were doing unless we take the larger framework of their world into view.  Specifically, they wrote from the perspective of an emerging people group dominated by super powers thru most of their history such as the Egyptians, Assyrians, Babylonians and Persians.  Without overtly trying to do so, Dutcher-Wells helped me to better understand why contemporary readers of the Old Testament from the majority world often approach it differently than do those of us in the modern West.  Living in the shadow of dominant nation states and macro forces sometimes allows them to better dial in to exactly what is going on in the biblical text.  In addition, she consistently reinforces the importance of letting the Scripture speak on its own terms.  Numerous examples could be cited here but one of my favorites was her insight into the story of Samuel’s call by God in I Samuel 3.  As Dutcher-Wells points out, the specific way the narrative is shaped demonstrates the spiritual incoherence of Eli as a priest of Yahweh, thus reinforcing the need for revival and a new order of leadership for God’s people (p. 57).

While recognizing that biblical history is inherently theological because it tells of God’s actions with His people Dutcher-Wells likewise stresses the human element in these stories.  Rahab’s choice to side with the Hebrews reveals her faith in the face of imminent destruction (Joshua 2) and Nehemiah’s shrewd actions in the face of intense opposition allow the walls of Jerusalem to be rebuilt (Nehemiah 4).  God is certainly involved in these situations, at least providentially.  But sometimes theologians, especially younger ones, are tempted to forget that people are quite capable of making choices for both good and evil.  Dutcher-Wells forces us to see that this is exactly what biblical history often times communicates.

My only qualm with this fine volume is the author’s occasional notation that, in her view, there are inconsistencies in the biblical record.  I realize that scholars land at different places in their discussion of various tensions within the Scriptures but at both a personal and an academic level, I’m uncomfortable with her stance on this.  My own observation over the past few decades is that as scholars dig deeper into the text using the very methodologies that Dutcher-Wells promotes, more and more of these tensions are beginning to dissolve.  As I’m sure she would agree, the biblical writers knew exactly what they wanted to communicate; our job, as readers, exegetes, and interpreters is to do whatever we must to discern what their intent was.  This may take more time, study and diligent digging on our part than we initially realized but the cumulative evidence of the latest scholarship points in the direction that apparent inconsistencies will, in time, be resolved.

Given that one caveat, I highly recommend this text.  It’s a fine book that innumerable students and scholars will find accessible and instructive as they engage the historical books of the Old Testament.  All those who love the Scriptures, be they professors, pastors or teachers, and who have not yet encountered this meaty little treatise would be wise to do so for their own benefit as well as for the benefit of their classes and congregations.