Rehabilitating Inerrancy in a Culture of Fear 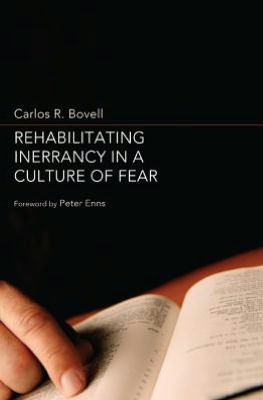 Carlos Bovell is a free-lance Christian writer with degrees from Westminster Seminary and the Toronto Institute for Christian studies.  This book is a kind of sequel to his Inerrancy and the Spiritual Formation of Younger Evangelicals.  In both, a key theme is the growing discontent among many evangelicals (he typically calls them younger) with classic formulations of inerrancy and the authoritarianism with which many American evangelicals employ them.  With Peter Enns writing the foreword to this book and Vern Poythress coming under fire here and there in the volume, one can only assume Bovell had a pretty bad experience with inerrancy during and since his days at Westminster.

I come to a reading of Bovell from a curious position.  I am an inerrantist who does not find the classic formulations as problematic as he does, but I do lament the heavy-handedness with which some American evangelicals wield the doctrine, especially when people have to sign off on every jot and tittle of the extensive Chicago Statement on Inerrancy in order to be acceptable (i.e., employable or invitable) to churches, parachurch organizations, or educational institutions.  But I also recognize that a disproportionate amount of the witch-hunting that he and I alike rue has come either in truly fundamentalist circles, especially in the South, or in thoroughly Reformed circles.  During my 34 years of membership in the Evangelical Theological Society, I have consistently recognized two quite different subcultures within it—those who make inerrancy something constantly to fight for and those who believe in it but recognize (as even the Chicago Statement, article 13, stresses) that it must be understood very differently depending on the biblical genre at hand, that it does not preclude any hermeneutical methods a priori, and that it is not nearly as effective a criterion for evaluating the acceptability of theological or exegetical positions as has often been thought.  Not surprisingly, these views are more common North or West of the Mason-Dixon line or in less Reformed circles.

One would not suspect, however, just how numerous such strands of American inerrantist evangelicalism there are by reading Bovell’s work.  And I do not sense in those strands nearly the discontent leading to “post-inerrantism” that Bovell does.  I suspect, therefore, the problems Bovell continues to address are due more to how inerrancy is used in the sociology of certain high-profile institutions than with the doctrine itself, though clearly there are people unhappy with both.

Bovell’s first main chapter contrasts the divisive use of inerrancy he has experienced with the desire for reconciliation often inherent in social justice causes popular among younger evangelicals today.  His second chapter appeals for the reestablishment of the hermeneutical distance between the Bible and its readers, as historical-cultural backgrounds are studied intensely and no interpretive approaches are excluded a priori.  Thirdly, Bovell examines the Chicago Statement, especially with respect to its understanding of truth (including God as Truth), highlighting how it is too heavily tied to propositional theology and didactic (as opposed to narrative or even poetic) genres.  A fourth step examines inerrantists’ use of speech-act theory to try to reformulate the doctrine.  Here Bovell thinks such appropriation actually undercuts inerrancy rather than supporting it, because it assigns the truth claim of a text to its illocutionary force, rather than to the locutions of the texts themselves.  Fifthly, Bovell appeals for breathing room for students to experiment in good faith with new formulations of bibliology without fearing censure from the academy or church.  Such new formulations would be less tied to the apologetic enterprise of the Christian faith that too often requires assent to certain forms of inerrancy before the interpretive process even begins.  Remembering that almost all of us have had powerful experiences with God through the Bible before we ever understood or delved into bibliology or hermeneutics is important throughout these various ventures.

A final main chapter examines the statements of the father and son team of Charles and A. A. Hodge at “Old Princeton” and, to a lesser degree, B. B. Warfield; showing that at least part of the time their work was more nuanced than many today recognize, with both the inductive and deductive approaches to Scripture given equal importance.  In other words, one may deduce that if God is the author of Scripture and God speaks only truth, then the Bible will contain truth without any mixture of error; but only the inductive analysis of the phenomena of Scripture itself can define what kinds of truth we are talking about and what does or does not constitute error.  We must judge the scriptural authors by the standards of the cultures in which they lived and wrote, not ours.

At one level, there is very little I have to disagree with in Bovell’s main tenets.  I could quibble with numerous more minor points, especially about his description of Vanhoozer’s appropriation of speech-act theory, which I find to be the very helpful and creative kind of reformulation that Bovell is calling for, but that would take us far beyond the bounds of a short review.  What I find myself thinking again and again as I read the book, however, is “but that hasn’t been my first-hand experience”—not as a student at Trinity Evangelical Divinity School in the late 1970s, not with the scholars I most respect in ETS in the three decades I’ve been a part of the organization, not with the Denver Seminary I know well and have taught at for 26 years now, not among many colleagues today at many other schools with strong ETS participation with which I am familiar, like Gordon-Conwell, Dallas, Bethel, Talbot/Biola, Western, or Wheaton, to name just some of the most prominent.  In fact, I actually learned most of what Bovell includes in his book as part of my studies at Trinity, of from reading TEDS authors in more recent years.

Bovell entitles his book Rehabilitating Inerrancy but he does not actually suggest how he thinks this should occur.  The book is more a plea for others to make the effort and for those inclined to criticize each such creative venture to suspend judgment for once and give students a chance to risk, make mistakes, reformulate, and thus genuinely contribute to the field.  Such a plea is well-timed, given Westminster’s forcing Enns to resign and the Southern Baptist seminaries’ seemingly perennial fights against various members of their own faculties.

Maybe what is needed is not something much more sophisticated than what we have in the Chicago Statement, but something much less so.  Perhaps inspiration is the doctrine that is profound and complex, and which needs more attention.  Maybe inerrancy just means “without error as any original author or reader would have understood it in his or her culture”.  I actually have read a fair number of essays—some in print, some on student exams—that I believe are completely free from errors of content (and, more rarely, typographically).  But I certainly don’t think they are God-breathed!

But perhaps Bovell is envisioning a trilogy, so that his next book will offer his own constructive alternative.  Since the blurbs about him on his books do not suggest that he is employed by any inerrantist organization, it would seem he would have the least to risk of just about anyone qualified to undertake the task, within the culture of fear that he has identified.  Like the church member who keeps reminding the leadership that “we don’t have a ministry that does x,” it may be time to reply, “then go create one yourself!”