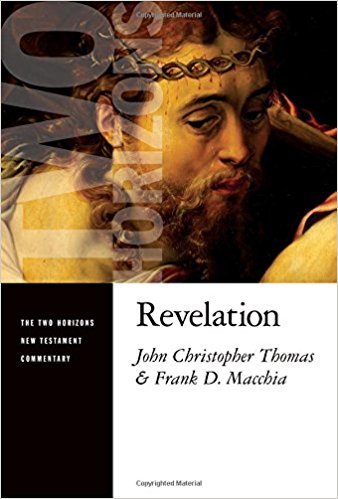 This book is part of a unique series which attempts to bridge the gap between exegesis and theology. To achieve this the commentary has been co-authored by a professor of biblical studies (John Christopher Thomas of Pentecostal Theological Seminary) and a professor of systematic theology (Frank D. Macchia of Vanguard University). The bulk of the work is in the format of a traditional commentary on the biblical text, while the final section is an exposition of the dominant theological themes of Revelation. Both authors avowedly write within the Pentecostal tradition, the upshot being that they are attentive to the clear references to the Holy Spirit throughout Revelation, and take seriously its claim to be a prophecy. Thus, in order to explain the relationship between Revelation as a genuine prophetic vision and as a carefully composed literary work by John, the authors find an apt parallel in the Pentecostal phenomenon of speaking in tongues, “where the Spirit speaks through an individual believer in ways that draw upon all that he or she is, while not obliterating his or her heritage or personality” (p. 39).

The introduction follows that standard commentary genre by addressing issues of literary type and structure, audience, authorship, and date, with a brief but insightful section on the history of effects of Revelation. The authors conclude that Revelation belongs with the other NT writing attributed to John (the Fourth Gospel, 1-3 John) in addressing the Johannine community. The references to the OT also suggest that the OT functions for them as authoritative Scripture. The theme of witness and persecution and references to opponents (the beast, false teachers, and false prophets) throughout the book suggest that suffering and opposition play a key role in the lives of the readers, though they don’t pay as much attention to issues of compromise that the readers faced. The authors favor slightly a later date (during the reign of Domitian) for the writing of the book, though they conclude that the reference to the “Lord’s Day” in 1:10 relativizes all other days and indicates “that the only day that matters is the Lord’s Day, the end of all days” (p. 35), giving Revelation an eschatological date! As for authorship, Revelation at the very least comes from the same (Johannine) community, if not the same hand, as the other Johannine works (Fourth Gospel, 1-3 John).

The commentary itself is a phrase-by-phrase analysis of the text of John’s visionary piece, which examines lexical, grammatical, historical, and intertextual (OT) features. One helpful feature is that the authors draw attention to parallels with the Fourth Gospel and 1-3 John, though at times the parallels they draw seemed to be a bit of a stretch. The authors are also alert to the OT background of the imagery, and explanations of the text are clearly presented and fair. The commentary sits comfortably within the mainstream of scholarly treatment of Revelation, as testified by the bibliographic references. If I were to characterize the overall approach to Revelation’s visions temporally, it would be a combination of a futurist and preterist approach. The authors seem to see the Millennium in 20:1-6 as future, though they do not speculate as to what happens during this time. The millennium is a large number that dwarfs all other periods of time referring to the binding and persecution of the church. The focus of the millennium is relational – the saints will be with Christ (p. 354).

The final section explores the dominant theological themes in Revelation, but also situates them canonically in relationship to the other NT witnesses: John, 1-3 John; Matthew, Mark; Luke-Acts; Paul; Other NT voices. The themes developed are God, Christ, Holy Spirit, Church, Salvation, and Eschatology.

The reader will want to disagree at times with this or than interpretation: e.g., the first rider of the first seal in 6:1 refers to Christ (pp. 155-56). Furthermore, this commentary is affected by a couple of weaknesses. First, the grammatical descriptions are not up-to-date, especially comments on the verb tenses which are out of touch with more recent emphasis on verbal aspect. Second, the phrase-by-phrase format is often in danger of getting bogged down in the details of the text and losing sight of the overall structure, context, and message of the visions. What is sometimes missed is how overall Revelation is an ideological critique of pagan, idolatrous, murderous Rome. One additional issue is the misunderstanding of the “hear”/”see” dynamic in Revelation. At times the authors talk of the “psychedelic-like morphing” of images from one form to another (pp. 82, 147). However, in these instances it is not said that John sees anything morph from one image to another in psychedelic fashion. Rather, it only says that John “hears” one thing, but then “sees” something else. The dynamic creates an interpretive interplay, where what is seen and heard mutually interpret one another. Notwithstanding, this commentary will be a valuable addition to the increasing selection of commentaries on the last book of the bible, exemplifying an approach that challenges so much of the popular nonsense the seems to characterize preaching and teaching on Revelation. In addition, it will model an approach that is sensitive to the theological message of Revelation, and sees it as a unique but complementary theological contribution to the rest of the NT (and the entire Scriptures).