Ritual Water, Ritual Spirit: An Analysis of the Timing, Mechanism, and Manifestation of Spirit-Reception in Luke-Acts 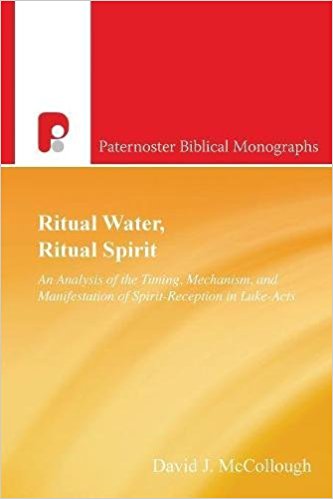 Does the Spirit come upon believers in the book of Acts in any discernible pattern? Or are things still like they appear to be in the Old Testament, where God’s Spirit fills certain individuals for special acts of power and then departs again? Or does he come upon Christians for good but we can never be sure when the first experience will be? These questions have vexed readers throughout church history, and modern scholarship has studied the question repeatedly with all kinds of competing answers, as the thorough literature review in this volume demonstrates.

David McCollough, in a revision of his PhD thesis at the London School of Theology, tries to break the impasse by engaging in a narrative-critical study of the topic in Luke-Acts. Overlooked by many writers is the fact that Luke 3:21-22 introduces the issue with Jesus’ own baptism in the Jordan River. The Holy Spirit comes on Jesus in conjunction with his baptism and “as he was praying.” When we come to the Pentecost narrative in Acts 2, then, we should not be surprised that the Spirit fills the disciples after prolonged times of prayer (1:14) and in conjunction with the call to water baptism (2:38). The key new dimension here is the xenolalia that enable the disciples to speak in other known human languages (2:1-11).

Acts 8, of course, provides the passage that proves hardest for many exegetes to mesh with what they see elsewhere in Acts. McCollough insists that we not try to build up a pattern from all other texts and then see whether Acts 8 can fairly be made to fit it or not. Rather, we must take the texts sequentially as they would have originally been heard or read. What the seemingly delayed reception of the Holy Spirit by the Samaritans teaches us, then, is that there may be occasions when the Spirit doesn’t come immediately after initial belief and baptism. The solution in those instances is prayer accompanied by the laying on of hands, as verses 15-17 make clear. What it was that demonstrated that the Spirit did arrive at this point is not stated, so, in light of Acts 2, we should assume it is again xenolalia.

Was the ability to facilitate the reception of the Spirit through hand-laying a gift or ability that only the apostles had? Was this why Philip didn’t (and couldn’t) do it, and Peter and John had to come from Jerusalem to perform this ritual? Luke doesn’t say but the next relevant passage, about Saul’s conversion, gives a partial answer. The ability is not limited to apostles, because Acts 9:10-18 depicts Paul praying and Ananias being instructed by the Lord in a vision to go to him, and he lays hands on Paul who is then filled with the Spirit and baptized. What we don’t learn, however, is if every Christian can do this.

Acts 10 does not prove to be a problem because the Holy Spirit comes on Cornelius and his companions exactly when Peter is preaching about belief and forgiveness. Presumably that’s when they repent, they experience tongues and they are baptized in water (vv. 43-48). In Acts 18-19, McCollough recognizes the similarities in the way Apollos (18:24-28) and the disciples in Ephesus (19:1-10) are portrayed as knowing only the baptism of John, and deals with them both in parallel fashion. Theologically, even if not chronologically, they are both pre-Pentecost and need more information and more Spirit-produced empowerment. They are both described as having had some genuine religious experience, but “disciple” (19:1) must be distinguished from a full-orbed Jesus-follower.

McCollough thus concludes that “Luke created a programmatic expectation of dissociative xenolalia, magnifying God as the experience of the Spirit which takes places when the Spirit comes during Christian initiation” (p. 214). The other features that may accompany the coming of the Spirit, however, vary, as does the exact timing, though even in the case of the Samaritan believers it is still close enough in time to their beginning to believe to be considered part of their initiation.

This brief summary scarcely does justice to the complexity of McCollough’s discussions, which routinely interact with numerous objections to each position that he takes. Arguments from silence, adjudicated as to which ones hold weight, appear regularly, and the emphasis on reading Luke-Acts strictly in sequence, in light of fairly sophisticated discussions of narrative progression, sequential reading, figures of speech, and rhetorical criticism, adds particular value to the work.

It is interesting that the book observes that J. D. G. Dunn, whose Baptism in the Holy Spirit in 1970 spawned the latest round of scholarly discussions of these topics, later abandoned a few of his supporting exegetical arguments, without changing his overall conviction that no one can be said to be saved who does not (yet) have the Spirit, so that McCollough does not interact with those specific arguments. But they are the very arguments, when defended differently than Dunn did, that I have found the most compelling! The two most important ones are that the Samaritans are said to have believed Philip (not Jesus) in Acts 8:12 and that the adverb monos (NIV “simply”) in verse 16 must modify “been baptized,” not “in the name of the Lord Jesus.” Thus the contrast has to be with another implied verb, not between baptism in Jesus vs. baptism in the Holy Spirit. Perhaps that implied verb was “believed.” Perhaps the Samaritans had only been baptized in Jesus; they hadn’t actually believed in Jesus (because they had believed in Philip). It is true that the issue is not “believe” followed by a dative direct object, as Dunn had claimed. It is rather that nowhere else in Acts does anyone ever believe (in) a human proclaimer of the gospel message, an observation than surely must also be significant for the narrative critic.

In other words, I still suspect that one could adopt a narrative-critical approach and come up with Dunn’s overall conclusions. But that would require interaction with numerous other small points well beyond the scope of a short review. It would also have been nice for McCollough to reflect, however briefly, on its significance for subsequent Christian practice. Most notably, he leaves the reader expecting him to conclude that unless xenolalia accompany salvation, the experience is not genuine. But that, of course, would exclude almost every “Christian” who has ever lived! Instead, he leaves us hanging. Nevertheless, for the person who wants to become fully up-to-date with virtually every contribution to the discussion, and to be forced to carefully rethink why they hold the views they do on each relevant passage, McCollough’s monograph is a welcome contribution to the debate.