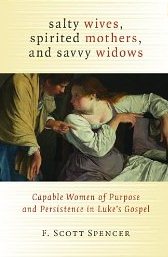 F. Scott Spencer, professor of New Testament and preaching at Baptist Theological Seminary, Richmond, Virginia, has published over the years of his career a number of articles and books dealing with women in the Bible as well as a commentary on the two volumes of Luke’s writing that appear in the New Testament. In his Salty Wives title, Spencer returns to the gospel of Luke in pursuit of a fuller understanding of some of the women found there. He deals with women about whom Luke provides quite a bit of information (Mary; Mary and Martha) as well as women Luke treats with brevity (Lot’s wife; the queen of the South).

Spencer’s major purpose is to examine the contention of many feminist biblical interpreters, whom he amiably describes as FBI agents, that Luke was harsh in his treatment of women and that the third gospel is not good news for women when examined from a feminist perspective. Feminist reactions to Luke are strong and unequivocating.  Two examples will suffice here. Schaberg: “The Gospel of Luke is an extremely dangerous text, perhaps the most dangerous in the Bible.” Reid: Luke, “like the author of the Pastoral letters . . . is intent on restricting them (women) to silent, passive, supporting roles.” Spencer’s avowed purpose in writing the book is “to pull the pendulum back a tad from the feminist-critical pole toward the center.”

The scrappy adjectives in the main title of this book also serve, likely unintentionally, as good descriptors for Spencer’s writing style. The text is spirited because the author makes his points with verve and drive. The arguments in each chapter are savvy because Spencer is careful to observe the data under examination from every possible perspective before drawing the matter to a conclusion.  And the prose is salty because Spencer has a refreshing, earthy way of description that engages his readers. For example, based on the pugilistic and literal meaning of hypopiaze me as used in the parable of the widow and the unjust judge, Spencer writes, “And what if, in all her fist-flailing tirades, she happens to land one right under the old guy’s eye? Now that would be a funny picture – not to mention the shiner he would sport for several days thereafter – perfect for tabloid covers.” No one can accuse Spencer of making his commentary on scriptural texts dry, unreadable, or lackluster.

The chapter devoted to Mary, the mother of Jesus, is uplifting and inspiring for any reader who searches for examples of strong and bold women in Scripture. Too often admirers of Mary focus on her young age and her unquestioning obedience to the call of God on her life. Spencer helps us see, however, that she questioned, probed, and engaged before acquiescing to Gabriel’s message that God wished for the Spirit’s presence to come over her body. Spencer’s analysis of the progression of prepositions throughout the Luke 2 passage is intriguing: from upon to through to into to with and finally to among. Mary does all her questioning in a manner that does not result in the imposition of Zechariah-like muteness.

Spencer thoroughly explores the limited information we have about Joanna, the friend of Mary Magdalene who had ties to the Herodian court. He treats the Mary and Martha account in Luke as a household rivals type-scene. Spencer concludes that Mary’s  choice is “the good part,” not necessarily the “better” part, and that Jesus affirms Martha’s “multiple acts of service.” The book spends an entire chapter comparing and contrasting three foreign women in Luke: the widow of Zarephath, the queen of the south, and Lot’s wife. The parable of the widow and the unjust judge, for Spencer, is not a story like the widow’s mite account but is an account of a widow’s might.

No doubt there are several places where Spencer’s line of argumentation could be stronger. For example, when he deals with Joanna he skirts past her presence at the tomb and focuses more on her important role as mentioned in Luke 8. Also, readers may not be convinced that Spencer succeeds in the final chapter when he compares Lukan women with women in Uyan-Semerci’s analysis of contemporary Muslim culture in Istanbul using Nussbaum’s ten capabilities approach.

Spencer does succeed, however, in achieving the goal he set out for this book: to pull the pendulum of feminist criticism back toward a more reasonable centrist position. Spencer does not try to make Jesus, or Luke for that matter, into first century feminists or egalitarians. Nor will Spencer give any ground to critics who might accuse Jesus and Luke of being misogynistic. But Spencer does succeed in demonstrating that the women he examines are indeed figures of purpose and persistence. The author of Proverbs 31 asks, “Who can find a virtuous woman?” The author concludes, and this reviewer agrees, “[T]o an encouraging degree, we have searched and found several – alongside the sweeper woman and savvy widow – in the narrative of Luke’s Gospel!”