Seven Days that Divide the World: The Beginning According to Genesis and Science 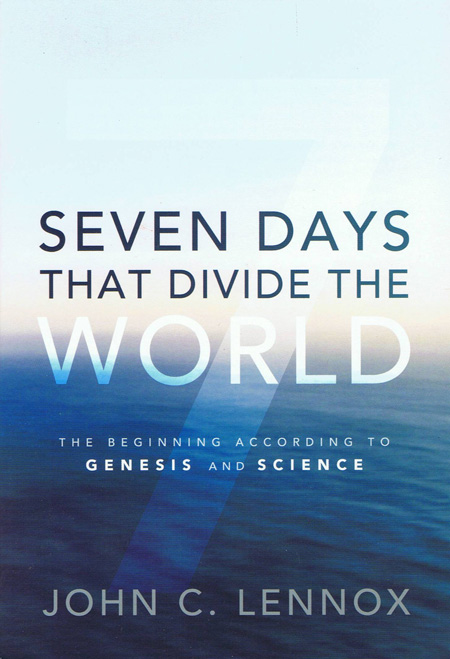 There is a growing debate concerning science and Christianity most of which centers on the first chapter of Genesis.  Even Christians have wrestled with proper interpretation of the creation account for centuries.  Does a six-day creation account match what we know about the age of the universe?  Can a Christian who believes in an old universe be true to what the scripture says?  What does the creation story tell humanity about God and nature?  John Lennox has written Seven Days that Divide the World to answer these questions and more.

John Lennox is a Christian mathematician and philosopher.  He begins his book affirming the truth that God is the author of both scripture and nature.  There is neither dichotomy nor contradiction between the two.  In the Introduction, Lennox says, “We think that, since God is the author both of his Word the Bible and of the universe, there must ultimately be harmony between correct interpretation of the biblical data and correct interpretation of the scientific data.”  He fully affirms the inerrancy and ability of the Bible to inform humanity about nature.  This is a theme throughout this book.  Lennox opens with this to show both Christians and skeptics that God created the universe and gave us his revelation through the Bible and that whatever humanity can discover about the universe will be in perfect harmony with scripture.  To ensure this, Lennox respectfully demands from Christians a proper interpretation and exegesis of the Bible.  He understands there seems to be a troubled relationship between science and interpreting the Bible.  Lennox believes that the two are equal in truth value because God has authored both and that each is meant to illuminate the other, rather than dominate.  He spends an entire chapter on the Church’s history of dealing with geocentrism and heliocentrism.  He wisely points out that the accepted meaning of certain passages by some Christians does not necessarily translate to the proper interpretation.  Even great figures in church history like Calvin and Luther believed the earth was at the center of the universe and the sun revolved around it.  Fortunately, a Christian scientist named Galileo came along and proved otherwise.

Lennox lays out the three basic models of interpreting the creation story.  The first is a so-called “young-earth creationist” account that reads Genesis 1 as seven (24-hour) days.  God created the earth in six literal days and rested on the seventh.  Subsequently, this model tends to point to a young earth that may only be ten thousand years old.  However, Lennox mentions that 24-hour days in Genesis 1 could still be congruent with an old universe.  He mentions the possibility that long periods of time could have transpired between the days of creation yielding an old earth.  The second model is one known as the Day-age View.  This view interprets the Hebrew word for day based on other passages in the Bible where a day is described as an age or long period of time.  In this view, the creation story lasts quite a long time and is in harmony with scientific evidence for an old universe.

Lennox’s third category is known as a The Framework View.  This view is the most discussed and is obviously closest to Lennox’s own view.  The Framework View explains the days in creation in a logical order rather than chronologically.  In this view, the days are not necessarily 24-hour periods, but are more logical categories.  Lennox provides a helpful metaphor and explains some key elements in the text that point towards this view.  He asks the reader to consider how a builder and a surgeon would explain the construction of a hospital.  The builder would most likely explain the construction in a chronological fashion beginning with the foundation, then with a floor-by-floor description.  A surgeon might explain the building categorically by first referencing a third floor surgical ward, then second floor children’s ward, then basement parking garages.  Lennox provides ample support for this Framework view with some exegetical evidence.  He does not pretend to be a Hebrew scholar and cites plenty of other scholars.  The basic clues indicate that the Bible uses different articles to describe the days giving special distinction to days six and seven.  The first three “days” of creation sum up the universality of creation, which includes light and darkness, water and air, and land and vegetation.  The last three sum up the particulars–sun and moon, fish and birds, and animals and humanity.  This logical explanation helps explain why the earth would have light even though the sun is not introduced until day four.

One great nugget in this book is Lennox’s humble approach to understanding.  He encourages that all Christians approach interpreting the Bible with humility and be willing to adjust their personal beliefs when the text is shown to mean otherwise.  He is in no way suggesting that the Bible is too complicated or mysterious to understand, but that we should not project our biases onto the true rendering of the text.  Lennox also realizes that while this issue of interpreting Genesis matters, there are more important issues like the Gospel.  He is clear to draw a distinction between doctrinal necessities like the death, burial, and resurrection, and issues like the creation story.  Christians must believe in the resurrection, but can disagree on whether or not Genesis is referring to a literal six-day creation.  Lennox also makes a good distinction between reading the text in a literal way and in a literalistic way.  A literalistic reading does not account for linguistic uses of hyperbole, metaphors, and even literary genres.  Poems in the Bible are not meant to be read as a scientific textbook.  He defines a literal rendering of the text as reading it within the context, genre, and style in which it was meant to be read.

The crux of this book is the last chapter entitled, “The Message of Genesis 1.”  Lennox rightly explains how the creation story exalts God as the supreme being over all and that humanity has a special place amongst creation.  God created everything ex nihilo (out of nothing) and rules over all.  His resting on the 7th day is also important; it is not to show that God was tired, but that his creating was over and complete.  Lennox notes this completeness as a polemic against evolution.  He states that God’s infinite sabbath does not allow for the guided evolution that theistic evolutionists posit.  God’s creation of man was also significant.  Lennox mentions that there was no one to tend the ground, so God needed to create a different being from any of the animals, including any hominids that existed.  Genesis 1:27 is the axiomatic verse for the distinction between humanity and animals.  Humans are the only beings created in God’s image.

John Lennox does not pretend that his book is the answer to all the riddles of the creation account.  Additionally, this book is not limited to the creation account.  He notes with some frequency that his text is a mere introduction to some of the issues in Genesis, but that it can serve both Christians and skeptics.  Lennox’s goal is that a proper understanding of Genesis will yield an informed understanding of both God and humanity.  His scholarship is both thoughtful and respectful of other interpretations of Genesis.  The thrust of this book is primarily two-fold.  Lennox wrote this to demonstrate how Christianity and science are both expressions of truth and how the book of Genesis is integral to human existence.  He succeeds on both accounts. Lennox is humble enough to admit his own inadequacies in Hebrew translation and faithfully gives credit to multiple sources that have contributed to his own views.  He also highlights the overarching narrative of the Bible that God is a redeemer who has provided the necessary and sufficient means for reconciling humanity to himself through Christ.