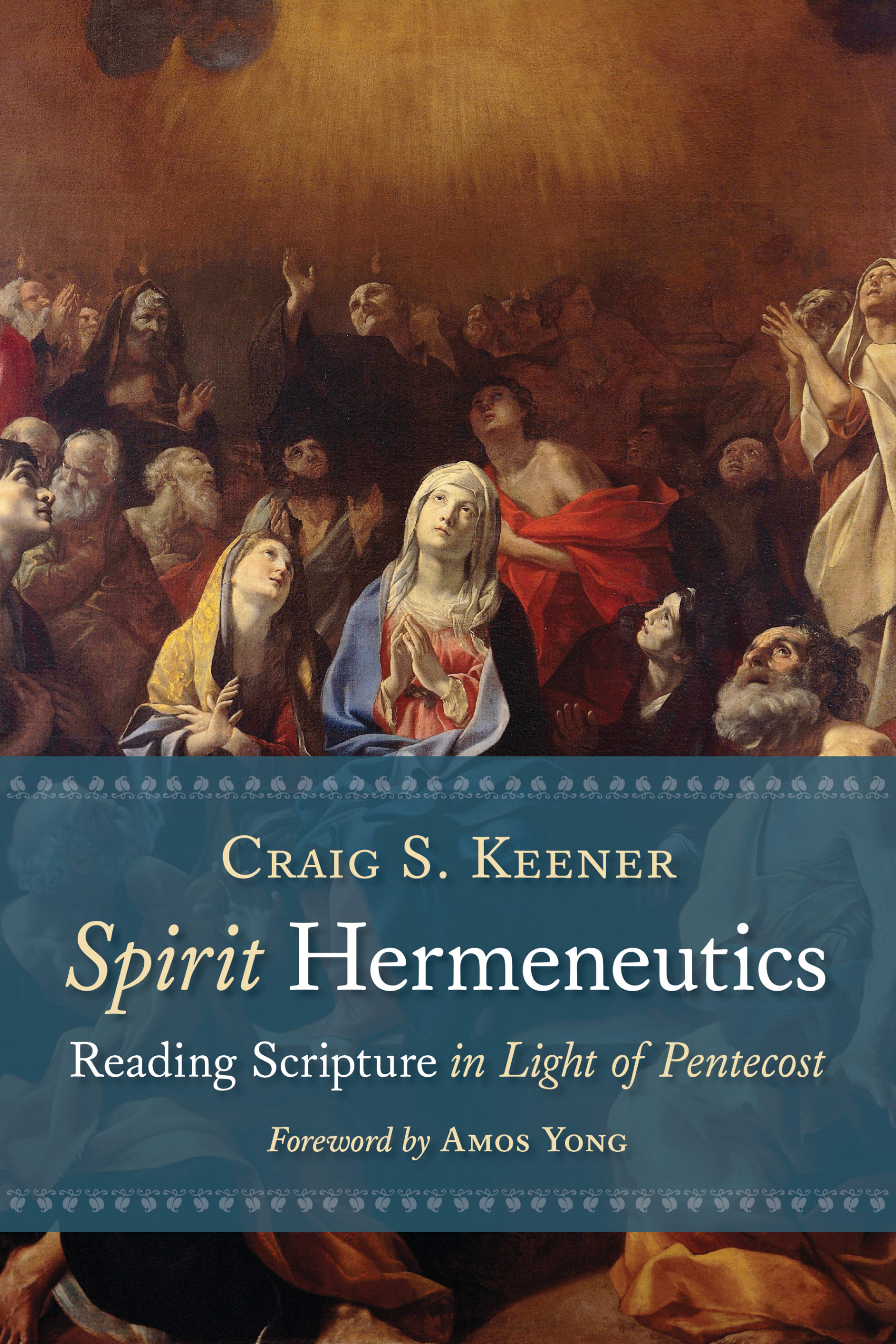 As a charismatic myself, I read Keener’s recent work on hermeneutics with particular interest and the bias of a committed “continuationist.” What I found was an approach to studying and applying the Bible that I hope a committed cessationist could also endorse (perhaps with a tweak here or there). Unless we think that the Holy Spirit of Truth no longer indwells, empowers and guides believers, it should go without saying that he ought to be invited to illumine our reading of the texts he inspired. Keener is correct to say, “Ultimately a Christian hermeneutic is no less than a Spirit hermeneutic—an approach that humbly recognizes that it is God’s voice, rather than our own, that we must hear in his Word” (p. 288). Whether or not we agree that “we live in the era of spiritual gifts long neglected by the church” (p. 287), we certainly live in an era in need of fresh appropriations of the gift of God’s written Word that pay due attention to the contexts both in which it was first given and in which it is now received.

The first part of the book, “Α Theological Reading toward Praxis and Mission,” sets the stage for what follows. Keener makes what should be an obvious point right from the start: we all ought to read the Bible to inform our theology and spur us on to actions befitting Christ-followers. In fact, he notes “most biblical writers wanted their audience to implement the lessons they communicated” (p. 19). And yes, he does discuss authorial intent later in the book. But here, he adjures those readers whose focus on their own horizon threatens to eclipse those of the Bible’s first listeners/readers to begin the interpretive process with that initial group. He turns next to “Reading Experientially.” Whatever our theological or denominational stripe, Christians must read the Bible as more than history, or biography, or poetry for that matter. Christians should read the Bible to learn how to live in relationship with the God who is active in our world yesterday and today. “Reading from the Vantage of Pentecost” also means asking how God intends to use us to accomplish his goals. “If we really hear God’s heart in Scripture, we will read Scripture differently” (p. 40); indeed, we will not be surprised to find that he is building his Church in record numbers among the poor of the Majority World (p. 46). Keener concludes the section observing that Spirit-filled methodologies assume continuity from the biblical world to our own. Here he does clearly express his view that cessationism does not make the best sense of the biblical data regarding God’s dealings with his people, especially since Pentecost.

“Global Readings,” the second part, pertains largely to the Majority World church. He exhorts us in the West to be willing to learn from the less educated but vibrant and growing churches in the rest of the world, where miracles and spirits abound. In an indictment that bears repeating, because people are so adept at identifying the logs in the eyes of others, he exposes the Western church’s long-term “syncretism with radical Enlightenment philosophy.” Chapter 3 deals with tongues, its function in Acts, its place in Pentecostal history and as a token of empowerment for cross-cultural ministry. “Luke’s real pneumatic focus is prophetic inspiration to communicate Christ’s message cross-culturally” (p. 64). We need to act like we believe that God has or wants children from every tribe and nation. “Global Reading: Contextualization and Scripture” goes on to assert that members of the Global Church are enriched by finding out how various cultures perceive the biblical text. For example, people currently in agrarian settings can shed light on many of the Bible’s metaphors. We are able to avoid syncretism most easily when we strive to apprehend both biblical cultures and receptor cultures. “Needing Other Cultures’ Input” underlines the necessity of discovering our blind spots: “most North American evangelicals are more inclined to think of syncretism in terms of, say, east Asian ancestor veneration than in terms of worshiping both God and mammon” (p. 80). Hearing how multiple cultures read and apply Scripture can and should often serve as a corrective to single-culture interpretations. Method matters, so Keener also defends the priority he places on reading the Bible as much as its first audience would have as possible. “Some Valuable Majority World Insights” treats, evil spirits, angels, witchcraft, and miracles. Bottom line: all four are historical and contemporary realities. It is the West, not the Majority World that is out of sync with the flow of spiritual history.

In the third part, “Connection with the Designed Sense” Keener stresses what many of us learned in our first Hermeneutics course: the intended meaning of a text, fully recoverable or not, is the foundation of reliable interpretation. “The Measuring Stick” for how Christians live our lives is the canon of Scripture, therefore we should study it carefully and contextually before we apply it. Charismatics in particular must evaluate what we think we may be hearing from God in terms of what God has already revealed in Scripture. God will not contradict himself. Another helpful caution to us Charismatics is that “spontaneity is not identical to inspiration”; God expects his people to work diligently at ascertaining truth worth living for (p. 113). There is no viable short-cut to godly wisdom. “Reading a work in its context is not a modern invention but the usual way of writing and reading texts” (p. 117). Chapter 8 observes that even in the postmodern world, readers generally find value in a text’s intended as well as received meaning. But where postmodernists may argue that all contextualized meanings are created equal, Keener demurs. The pursuit of meaning (and it would help if we could agree on a definition of meaning) compatible with what the Spirit inspired a biblical author to write, requires disciplined research into that author’s world. In “Room Left for Authors?” the answer is, of course, “yes.” Radical deconstructionists, for example, are rarely pleased when their intentions are misconstrued or abused. “How much room?” is probably the better question. Those of us who endorse a Spirit hermeneutic must provide ample room “to hear the design of biblical works in their ancient context” (p.141). The section finishes with a “Both-And.” We need to be sensitive to original and current meanings as well as to literary and historical criticism. However important it is to uncover original authorial intent, we fall short if we fail to apply what we find to our own contexts.

Chapters 11 – 13 unpack “Epistemology and the Spirit.” Keener’s starting point, not surprisingly, is that theological epistemology is rooted in God’s self-revelation. “An Epistemology of Word and Spirit” is by definition christocentric; empiricism will only take us so far. Without an epistemology informed by faith, we may reject miracles, or even, the resurrection of our Lord as impossible. All meanings are not created equal, neither are all worldviews. As those who believe the Word and are indwelled by the Spirit, we are obliged to encounter the biblical text with intentional trust rather than credulity or suspicion. “Biblical Epistemology and Hermeneutics” picks up on the idea that unbelief circumscribes how one experiences the world. Unbelief has consequences, among them, ultimately, the inability to recognize truth. The surest way to identify and then know truth is to submit our minds, and the rest of us, to God, the only being who knows everything. From there it is a logical step to “Reading the Bible as Truth,” but truth as understood by the Bible’s human writers. “Truth is not a Genre” is perhaps my favorite heading in the book. What a succinct way to communicate that the authors of the Bible understood historiography, science, standards of accuracy etc. differently than we do! So too, I appreciate the reminder that we often expect the Bible to answer our questions rather than its own. Moreover, I agree that if we truly read the Bible with the expectation that we will find God in his Word, we will not be disappointed.

“Intrabiblical Models for Reading Scripture” primarily examines how Jesus read and applied the Old Testament (chapter 14), how Paul understood the Law in light of Jesus (chapter 15), and how Stephen and Matthew applied the Old Testament christocentrically (chapter 16). Jesus embodied reading God’s Word as one illumined by the Spirit; with ears open and heart soft, he took nothing out of context. He understood and submitted himself to the Law according to its divinely assigned role in salvation history and contextualized it for his own contemporaries. Paul’s post-conversion assessment of the Law is that it can be read either from the perspective of works or of faith. “Fulfilling God’s covenant stipulations by the Spirit looks different than the old way of keeping commandments” (p. 223). A chart on pages 225-230 highlights comparisons between Israelite and other ANE laws to illustrate that God’s Law has always been unique at its core. The Law, despite, or maybe because of, its accommodation to fallen humanity discloses God’s love for his people. We need the Spirit to read the Law according to God’s purposes. “Ideally, a charismatic, prophetic, or continuationist hermeneutic is one that in addition to exegesis considers how we live in light of the message of the text” (p. 238). Without the Spirit, could Stephen have seen the parallels he did between Moses and Jesus? Without the Spirit, would Matthew have recognized Jesus in terms of Israel as God’s son? With the Spirit, might we find new (but consistent with the old) meanings in old texts? “We must learn to read the texts in tandem with the sorts of experiences the texts describe: a personal relationship with God in Jesus Christ” (p. 260).

The final part of the book, “Whose Charismatic Interpretation?” tackles some typically charismatic problems. We charismatics, alas, are known for idiosyncratic interpretations of Scripture that seem to issue more from frivolous musings than serious study. Chapter 17 pits “Naïve ‘Pentecostal’ Readings vs. Biblically Sensitive Pentecostal Readings.” Keener admits a number of charismatic excesses, while still reinforcing experience-oriented approaches to the Bible as entirely proper when they accord with the fruit of sound exegesis. He then queries, the “Global Pentecostal Community as a Safety Net?” His partial answer is that Pentecostalism, as multifaceted as it now is, does not speak univocally concerning numerous interpretive issues. Nonetheless, his conclusion urges that a uniquely Christian hermeneutic cannot be other than a Spirit hermeneutic. I heartily agree.