The Art of Biblical Prayer 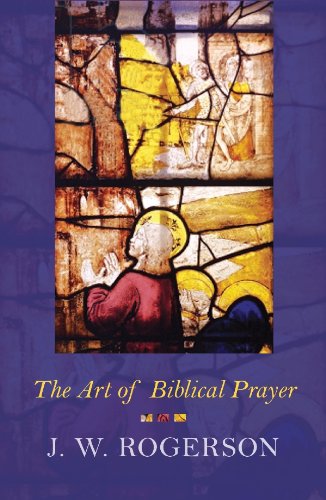 I usually do not read books on prayer or the spiritual life. Though well-meaning, they often seem to be not well grounded in the biblical text and can overly depend on personal experiences (which may be unlike my own). I picked up this little work, however, because the author was my doctoral adviser at the University of Sheffield in England. I know Professor Rogerson to be a deeply committed Anglican churchman, who regularly preaches at a local church (historic Beauchief Abbey) in the city of Sheffield, and who has a deep faith in God. We do not agree on some theological matters, but I do not doubt his sincere efforts to walk with God and model Christian life in the world. Professor Rogerson kindly sent me a copy of the book, so I set myself to reading it.

The author’s humility is evident from the opening line of the Introduction: “A biblical scholar is not the best-qualified person to write on the subject of prayer.” In the first sentence of the second paragraph he says, “… although I pray almost every day, I do not regard myself as particularly good at prayer (whatever ‘good’ means in this context).” What he offers in The Art of Biblical Prayer are his sermons at the Abbey that explore how prayer is understood and practiced in the Old and New Testament in order to process how that might orient prayer today.

The book contains seven chapters and an epilogue. Each explores issues to be faced in prayer and presents reflections on selected pertinent passages in the Bible. Questions at the end of each chapter are designed to review what has been said and to spur further reflection.

Chapter one asks, What is prayer?, and argues that it is fundamental to the Christian view of reality. Rogerson touches on several parables in the Gospels that teach that we must believe in a divine order different than the world around us; this perspective requires learning the language of forgiveness, grace, mercy, repentance, justification, and sanctification in our communication with God. Chapter two follows on from the first to argue that God and religious experience cannot be explained away by a scientific worldview; the God of the Bible is universal and transcendent, and religious experiences are real.

The next three chapters look at different kinds of prayer. The third chapter is titled “Asking God for Things.” Petitionary prayers, the author says, have been criticized for being self-centered, superstitious, unfair, and ineffective. There is an element of truth in each point; at the same time, God calls us to pray, and we can be certain that he works through our prayers (cf. Mk. 2:1-12). Chapter four deals with confession. Proper confession is grounded in a proper recognition of the awesomeness of God (cf. Isa. 6:1-8; Lk. 5:1-8). The fifth chapter considers affirmation, meditation, mysticism, and prayers for the dead. The first is trusting and living in the light of God’s presence. Meditation, in Rogerson’s view, is to pursue anything that leads to a deeper grasp of God and his ways. He includes the fruit of academic study here, which is a welcome word to those in the guild who struggle with the common—and unhelpful—bifurcation between the devotional and the scholarly. The author gives an interesting turn to the topic of mysticism, saying that biblically he sees that the emphasis is more on the wonder of God seeking us out rather than on human striving after God. Finally, he touches on prayers for the dead, which has been a topic of debate in the Church of England and which Rogerson is reluctant to support.

The sixth chapter emphasizes that a foundational lesson that we can learn from the Old Testament is that prayer is at heart an admission of our weakness before the trials of life. The Old Testament thus contains many powerful and sustained complaints against God, laments, and expressions of inadequacy (e.g., Pss. 22, 73, 88; Job; Mk. 13:46; 2 Cor. 12:7). The recognition of insufficiency drives us closer to God.

Chapter seven is a word-by-word, phrase-by-phrase exposition of the Lord’s Prayer. Rogerson contends that it should be interpreted from an eschatological perspective: God’s kingdom is here, even if not in its fullness. This prayer points us to live out the demands of the kingdom in relationship with God the Father.

The Epilogue is a brief word on the times when it is difficult to pray because of our circumstances (cf. Jer. 20:9; Lam. 3). These moments, which all believers have had, again underscore our weakness and our need for the God, who “delights to have contact [with us] through the manifold channels that we call prayer” (p. 91). The Art of Biblical Prayer closes with a bibliography and an index of scriptural passages and another for names and subjects.

This little book is a treasure trove of substantive reflections on prayer from multiple angles. The biblical discussions are a delight. There will be a few instances where readers might take issue with the author—such as, the conviction from his critical biblical stance that many of the stories in the Bible are “cultural memories” (pp. 60-67) that reveal truth about life and God; some would argue for a greater historical background. What The Art of Biblical Prayer also reveals, and this is not unimportant, is that Christians of different persuasions have more in common than they might think and have much to teach others about being faithful to the Gospel. I commend this work to all who desire to learn more about what the Bible says about prayer and the God who offers us these various means to have communion with him and so participate more fully in his kingdom.