The Bible Made Impossible: Why Biblicism Is Not a Truly Evangelical Reading of Scripture 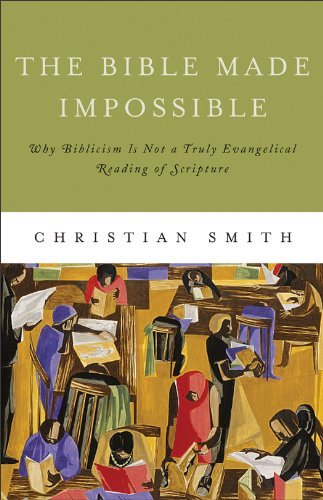 It’s not often that a professor attempts to dissolve the edifice of evangelicalism with a single book.  But that is essentially what Christian Smith, Professor of Sociology at Notre Dame, has tried to do with his latest work The Bible Made Impossible: Why Biblicism is Not a Truly Evangelical Reading of Scripture (Brazos Press, 2011). Perturbed with popular use of the Bible in American evangelicalism, Smith decries modern “biblicism” (defined below) as not only irresponsible, but “impossible” – a theory that doesn’t work in practice.  He endeavors to show readers the flaws of biblicism and then make a case for a “truly evangelical” reading of Scripture. Although peppered with helpful insights, The Bible Made Impossible falls short of its lofty goals, and leaves readers looking for solid ground amidst the shifting sands of academic criticism.

Because the word “biblicism” has historically pejorative connotations, Smith defines it as “a constellation of related assumptions and beliefs about the Bible’s nature, purpose, and function” (p. 4).  He gives biblicism ten characteristics. (1) The Bible is “divine writing” (2) that represents all of God’s communication to humanity and (3) touches every issue of human life. (4) Its meaning is clear to average readers (called “democratic perspicuity”), and (5) can be understood at face value without reference to context or (6) historical creeds. (7) Its message is internally consistent and (8) universally applicable assuming one has (9) pieced together the proper truths from the text. Finally, (10) it is like a “handbook” for Christian living and belief, speaking to subjects as diverse as “science, economics, health, politics, and romance” (p.5).

Smith argues that biblicism is rampant in American evangelicalism (institutions such as the Evangelical Free Church of America Campus Crusade for Christ, and schools like Wheaton College, Dallas Seminary, and Gordon Conwell are all tainted with biblicism according to Smith), and fatally flawed.  So what’s the problem?  His answer is “pervasive interpretive pluralism.”  Evangelicals – reading the same internally harmonious, clear, and straightforward text – disagree on nearly every subject the Bible addresses.  From church polity, the charismatic gifts, and women in ministry to topics like a Christian view of war and even theories of the atonement, “the Bible apparently is not clear, consistent, and univocal enough to enable the best-intentioned, most highly skilled, believing readers to come to agreement on what it teaches” (p. 25, emphasis his.)  The Bible’s own diversity, multivocality (many voices), and polysemy (sentences and passages with many meanings), much less the diverse experiences of its readers, undercut biblicism and presents a critical challenge to evangelicals.

After giving historical, philosophical, and sociological reasons for this current state of affairs, Smith proposes his solution to pervasive interpretive pluralism: a “Christocentric hermeneutic.”  To be “truly evangelical” is to see Christ himself as the key to the Bible’s unity and meaning. The true Word of God, Jesus, is God’s primary revelation, and both testaments can only be understood in light of the gospel.  Though not a unique idea, this hermeneutic will allow readers to accept scriptural ambiguity, drop “the compulsion to harmonize,” and once and for all clearly distinguish central theological issues from peripheral issues.

Although Christian Smith is clearly a brilliant sociologist (books like Divided by Faith: Evangelical Religion and the Problem of Race in America [Oxford University Press, 2001] are extremely helpful), his argument here falls apart on many levels. First, he argues that pervasive interpretative pluralism disproves democratic perspicuity, the idea that the main message of the Bible is clear to average readers.  Yet Smith himself believes that the Bible’s teaching on topics like poverty or money are “clear, straightforward and obvious” (p. 34, p. 144). He also argues the Bible’s main message of the gospel is abundantly clear (p. 94), but at another point relegates the penal satisfaction doctrine of atonement to a church teaching of secondary importance (p. 135).  If this is true, then what is the gospel? Moreover, who decides what’s clear and what isn’t?

Second, Smith denounces the attempts of evangelicals to make the Bible into a handbook treating topics as wildly diverse as cooking, exercise, gardening, and stress management (pp. 9-10).  Fair enough. The Bible is “universal history” (in the words of Lesslie Newbigin) and not just a book of religious advice. Yet Smith also argues that the gospel “blows the doors off every assumption, outlook, and experience that we have ever had” (p.93).  Does “every experience” include areas of human endeavor like “science, economics, politics, health and romance”, and perhaps even how we deal with stress (p.5)?  Irresponsible appropriation of isolated biblical texts is one thing; to call evangelicals who try to apply the gospel to all of life “biblicism” is quite another.

Third, pervasive interpretative pluralism is not only a problem for American evangelicals. Interpretative disagreement is a historical, global, and cross-denominational phenomenon. This is perhaps why the Roman Catholic Church has written out very clear statements on its position on issues like the ordination of women and modes of baptism. (By the way, Smith’s new church [he’s a recent convert to Catholicism] may qualify as biblicist. They affirm both the divine inspiration and inerrancy of Scripture [see The Catechism of the Catholic Church, Article 3.2.108]).

Fourth, positing a Christocentric hermeneutic is neither novel nor sufficient in overcoming diverse understandings of Scripture. There are an abundance of books, conferences, and seminars written by evangelicals that claim the gospel for the central point of reference.  Nobody disagrees with this.  But this hermeneutic alone is not enough to dissolve interpretative pluralism. For example, won’t both sides of the issue of the ordination of women claim to be “Christ-centered?”

There is a small mountain of other problems as well.  For example, his suggestion to just “accept scriptural ambiguities” is pastorally impossible (p. 131). One must decide, for example, if you will baptize by immersion, sprinkling or something in between. Humility in debatable issues is wise; epistemological suspension, however, hinders pastoral leadership. We could go on about his dubious suggestion of a canon inside a canon (p. 116), his vague inclusion of leading evangelical institutions in the ranks of biblicists (pp. 12-13), and insufficient treatments of issues like the effects of sin as a potential cause of interpretative pluralism (p. 38,41).

To be fair, the book has several strengths. Pervasive interpretative pluralism is a problem, as any seminary student who has puzzled over contradictory biblical interpretations knows.  Introducing a variety of voices to a formerly clear mental landscape can indeed lead to a crisis of faith (p. 88).  Moreover, collecting “the biblical facts” to get an unencumbered version of the truth is often naïve (p. 58). We too have our biases and occupy a specific place and time in history.  This should temper potentially arrogant conclusions and provide us with robust charity for the whole family of God.

But in the end, The Bible Made Impossible can’t solve the problem it set out to solve, and instead introduces a host of others.  It’s understandable to be frustrated by the tremendous fragmentation of evangelicalism and the often irresponsible use of the Bible that exists in many American churches. But instead of blaming this condition on evangelical “biblicism”, it may have been more prudent to suggest a return to the essentials of biblical interpretation, including a proper respect for the cultural, historical, and linguistic context of the Bible and the centrality of the global and historical community of God in rightly understanding the Word.  Regardless of how the “impossible Bible” debate turns out, this bibliophile will keep singing along with the psalmist, “Your word, LORD, is eternal; it stands firm in the heavens” (Psalm 119:89).