The Church in an Age of Crisis 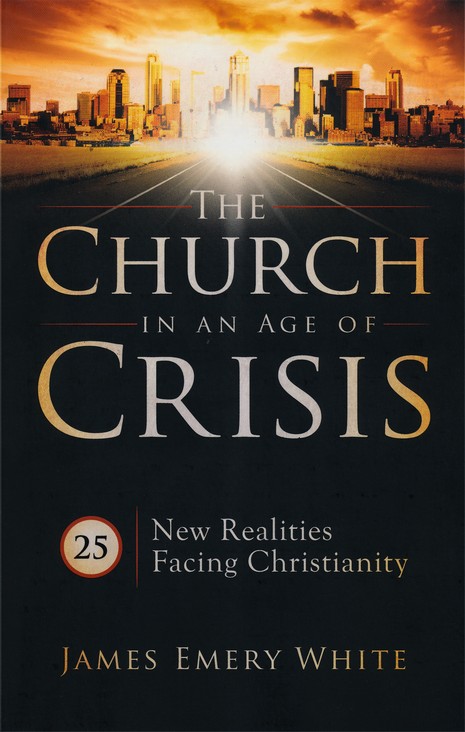 Years ago, a pastoral mentor of mine regularly proclaimed that Christians needed to be like the Old Testament tribe of Issachar (I Chronicles 12:32), people who understood the signs of the times and knew the best course for the Church to take.  While that was an important task thirty years ago, it was one that, unfortunately, too few believers and churches took seriously.  But now, given the ever-evolving landscape of contemporary American culture, the call to be like the men of Issachar is not just important but absolutely crucial.  In his new book, the superbly researched and provocative The Church in an Age of Crisis:  25 New Realities Facing Christianity, James Emery White makes exactly this point.

White begins by building on the unique thesis of Christian history articulated by English scholar Christopher Dawson.  Dawson argued that by the end of the 20th century the church had gone thru six identifiable eras and that each age began and ended with a major crisis that required the Church to show a new drive and a sense of determination if she was to survive and then thrive.  Using this as his foundation, White argues that the Church is now entering a seventh identifiable age due to the cumulative effect of the crises that have occurred over the last decade.  Between the fears of Y2K (remember that?), the terrorist attacks of 9/11, the financial meltdown of 2008/2009, and the wars in Iraq and Afghanistan, he documents that we are living in a time of seismic shifts.  This book, therefore, is his attempt to wake up the American Church to the new realities of an uncertain time and assist us in engaging our culture with the good news of the Gospel.

White has organized his material into five main sections titled Faith, Mindset, Marriage and Family, Media and Technology and Mission.  A casual glance at all this might lead one to believe that this is another book about faithful Christian living in an increasingly pagan environment.  But that would be a serious misinterpretation.  Each of these sections has five chapters that are intentionally designed to show the reader in specific detail that the contemporary era is a new world spiritually, intellectually, morally, and technologically.  Only by getting a firm grip on the spectrum of these new realities can the Church hope to effectively engage in her God-given mission of redemption.

Obviously, this short review can’t cover every issue that White discusses or lands on.  Recognizing that limitation, I’ll focus on what I believe are some of the most serious challenges he surfaces.  A few of these – the ‘pornification’ of American society, the promotion of gay marriage, and the disappearance of childhood – are all rooted in the breakdown of the family and a changing definition of what constitutes personhood.  Here, White argues that the major theological battleground in the coming decades will center on our doctrine of anthropology with all its inherent implications and I, for one, think his analysis is acutely perceptive.  When questions of conception, gender-identify and ‘the end of life’ are combined with powerful new technologies that can alter the very design of nature, we have truly entered what Aldous Huxley prophetically labeled a ‘brave new world’.  I suspect that White would agree that all of these challenging realities are going to require a great deal of thoughtful analysis from theologians, scientists and seasoned pastors who claim to speak for Christ.

A second arena of enormous influence that this book focuses on is that of media and technology.  White does a superb job of showing the control these elements have on almost all of us 24/7/365.  Whether it’s Facebook, Google, or news feeds, we draw on these daily for connection and information and they are not going away anytime soon.  While beneficial in many ways, the insidious part of these new technologies is that they have taken on god-like qualities.  We’re not just fascinated by their powers but, like the ancient Israelites before the altars of Baal, we bow down and worship them.  Anyone who has ever watched the Apple Corporation unveil its latest product before an adoring crowd murmuring ‘oohs,’ ‘ahhs,’ and sometimes even shouts of acclamation can see the pinpoint accuracy of White’s cultural analysis in this area.

Fortunately, White doesn’t leave us without hope and in the final section he dials in on the Church’s response to this rapidly changing and demanding environment.  In the two strongest chapters, respectively titled ‘Clash of Civilizations’ and ‘Whatever Happened to Evangelism?’ the author first brings us face to face with the strength of contemporary Islam by showing its growth in both Western Europe and North America.  In a somewhat startling fact, he notes, ‘There are now more Muslims in the United States than there are Episcopalians and as many – if not more – Muslims in the United States than there are Jews.  In fact, Muslims are likely to outnumber Christians in Britain in just a few decades’ (p. 189).  Yet, what Muslims need – as do we all – is the message of God’s grace in Christ Jesus.

And that theme takes him to the chapter on evangelism.  His honesty here was both refreshing and compelling.  He argues – with terrific insight – that far too many evangelicals have subtly or perhaps not so subtly bought into the idea that the virtue of tolerance combined with an emphasis on social ministry is all we need to show our pluralistic culture the love of Jesus.  Unfortunately, this equation undercuts the need for a verbal witness to the truth of the Gospel and leaves the lost still lost.  White doesn’t downgrade the importance of social action but simply notes that while it’s important to buy a pair of Tom’s shoes we also need to make sure that we ‘don’t forget Tom’ (p. 196).

I hope it is obvious by now that I like this book a great deal and plan on referencing it in my classes as well as recommending it to all readers of The Denver Journal.  It’s only major shortcoming, in my view, is that it doesn’t mention the drastic economic realities facing contemporary western civilization in general and the United States in particular.  Every day the American government borrows $3.6 billion dollars and is currently in debt for $16 trillion.  To make that latter figure a little more concrete, if you spent $1 million a day since the time of Jesus up to the present moment you still would not have spent a single trillion and we owe sixteen of those to other countries.  This is a ‘new reality’ that has never been seen in the history of the United States and our failure to address it soon may lead to economic collapse, social chaos, and cultural suicide.  If that happens, the American Church will then have work to do in ways most of us cannot even imagine.

That being said, I am very thankful for the ongoing work of James Emery White.  He is one of Evangelicalism’s leading spokesmen and his research, insights, and pastoral heart shine forth for the benefit of us all.  Therefore, I strongly commend this book and hope that it will find an enthusiastic readership among pastors, teachers and Christian laity of all denominations.  May all of us who care deeply about sharing the Gospel with others in our rapidly changing civilization be informed, challenged and encouraged by its message.