The End of Protestantism: Pursuing Unity in a Fragmented Church 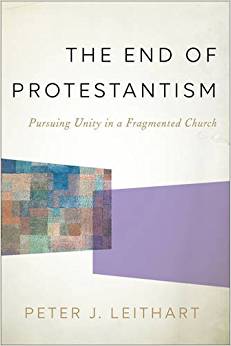 The unity of God’s people is a central prayer of Jesus Christ. Peter Leithart’s argument in this work provides a vision for what unity could look like if the Protestant reformation were to see it’s telos achieved. In particular, Leithart has in view fractious American denominationalism within the context of a global church history and the culmination of the Protestant project, it’s end. As he himself states, this work “is an interim ecclesiology…aimed specifically at theologically conservative evangelical Protestant churches” (p. 5). In order to make a case and propose a vision for a future where the church is unified in visible way and one in which denominationalism ceases to exist, he divides his work into four movements.

In movement one, Leithart lays out a biblical and theological framework for the unity of God’s people. The unity of the church is dependent on the eschatological future of the church in which it will be unified. It is this end which informs the present need for unity. Summarizing this point, Leithart states that “catholicism is our future” (p. 21). Leithart addresses traditional concerns of conservative Protestants with such pleas for unity in light of ecumenical movements that are plagued by their abandonment of the centrality of Christ in favor of liberal compromises. In chapter 3, Leithart lays out his vision for the unity of a reformed church, or what he calls a “Reformational Catholic church” that is not broken by denominationalism (p. 36). This church would be marked by unity in the visible catholic church by which he means the universal church (including Protestant, Catholic, and Orthodox). It would be marked by biblical unity around the authority of the Bible. A Reformational Catholic Church would be a sacramental and liturgical church. And finally it would be a metropolitan church in that it organizes around a worldwide fellowship. Leithart concludes movement one by recounting the history and goals of the Protestant reformation highlighting the reality that Protestantism will realize its intended goal once unity and reform has been achieved. The goal of the reformers was to reform, not to break off.

In movement two, Leithart addresses denominationalism as we find it today. In his estimation, denominationalism is a reflection of a pluralistic society. While the entire work is geared towards the eradication of denominationalism, in chapter five Leithart is careful to point out that it has preserved orthodox Christianity far more effectively than most “monopolistic establishments of Europe” (p. 69). He admits that denominationalism has been effective in allowing for a freedom of conscience and tolerance when it comes to the Christian faith and public life. Leithart acquiesces that denominationalism seems to be able to function well within the providence of God. In chapter six, Leithart begins to level more pointed critiques at denominationalism. For him, it is inherently sectarian in that churches seek to define themselves over against other churches. Denominationalism naturally feeds into the consumeristic mindset which aggravates so many church leaders today. Continuing in chapter seven, Leithart declares that “denominationalism institutionalizes division” (p. 89). This only feeds into the racism that has historically been so problematic in American denominations. In order to become a Reformational Catholic church, we must be rid of our divisions whether over praxis or race and renounce our national allegiances to political systems above the unity of the church. Before moving to movement three, Leithart shows in Biblical history why unity is a fundamental expression and demand of God’s people.

Movement three begins with Leithart recounting the growth of global Christianity. From Africa to China, the mission of God is going throughout the world and making the church more global than ever before. Two other American impacts which are shaping the denominational landscape are the rise of Pentecostalism and the impact of immigrants in America. These groups are shifting the conversations for American denominations. Finally, Leithart shows that the rise of non-denominationalism is fracturing the stronghold of denominationalism. Not only that, but the way in which evangelicals have engaged in culture wars in the last half century has diminished their reputation. The American dream, to which denominationalism was closely wed in ethos, is now a contentious issue and many are questioning its legitimacy for human flourishing. As Leithart asks “what sort of meta-structure of churches will emerge after the American civil religion shatters” (p. 161).

Movement four of this work is where Leithart fleshes out his vision. He speculates on what it could look like for Catholics to engage and be unified with Baptists, Anglicans, Lutherans, etc. Ultimately, he concludes this must be a work of the Spirit of God not a work of compromise and human cunning. He does not encourage Protestants to jettison hard fought biblical truths developed through the reformation and beyond. This would be to repeat the mistake of the World Council of Churches. Instead, Protestants should pursue certain forms of unity with Catholics. However, he warns that full unity will only be achieved by the Word of God, “when Jesus purges each church in the unique way that each needs to be purged” (p. 169). Leithart attempts to show how churches so divided can insist on doctrinal truth without giving into division by addressing the issue of Catholic and Protestant conceptions of soteriology and the sacraments. In his estimation, both sides have something to bring to the table. But, in order for this conversation to happen there must theological humility on all sides. He shows that there are certain key issues, such as the authority of Scripture, which Protestants must not give up. In applying his thesis, Leithart gives several examples of pastors attempting what he proposes. In closing, he admits that Reformational Catholic Churches do not yet exist. However, he believes they can once “the Protestant tribalism of American denominationalism dies” (p. 191).

Leithart’s work has much to commend. The plea and vision for unity is absolutely biblical. It is a core expression of God’s people, that we are united with one another. We misrepresent the very gospel we proclaim within the context of tribal denominationalism. His thought on the issue of denominationalism within the context of the United States is particularly insightful. The cultural milieu of America lends itself to a competitive and partisan denominational atmosphere. The goal of his work is the very goal of the Protestant reformation, unity. And Leithart grounds that unity, not in human cunning or compromise, but in the work of God himself. Unity is a gift, as Leithart proposes.

Leithart’s work has several areas of concern. A first area of concern is a lack of critical engagement with the tribalism that plagues Christianity worldwide, not just in America. From his work, it would seem that only American denominationalism is afflicted by divisions. While his work is of course aimed at American Protestants, his work could be bolstered by showing how global contexts are facing similar issues. Secondly, Leithart’s vision can feel too idealistic for implementation. This reviewer longs for the things Leithart longs for and has been part of planting inter-denominational churches. However, his work lacks a common confession with which Protestant evangelical pastors could assess even basic forms of unity. The book seems to have a compelling vision for the future but lacks a cogent method for which churches could disagree and remain in unity together, in spite of Leithart’s attempts to do just that. Thirdly, while his plea for unity is both noble and biblical, we must ask at what cost. Leithart does clearly lays out some “lines in the sand” but theological clarity and doctrinal accuracy seem to fall by the wayside in Leithart’s vision for the church in the future. He ventures into very relativistic waters when he suggests that perhaps neither Catholics or Protestants may have it right because neither of them see the whole picture.

Overall, any reader curious about what unity could look like for churches across denominations which are committed to the gospel and the authority Scripture will be inspired by Leithart’s work. This reviewer found his work particularly compelling and convicting. With the Missio Dei entrusted to church, this vision for unity and the culmination of the goal of the Protestant reformation is especially relevant.