The Fear of the Lord is Wisdom: A Theological Introduction to Wisdom in Israel 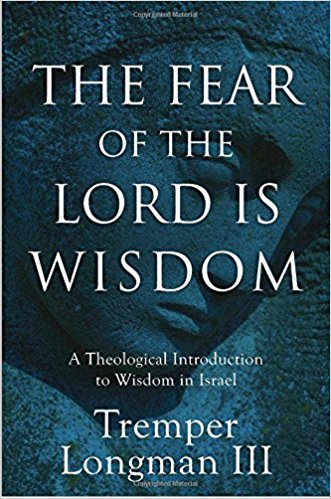 Tremper Longman’s most recent publication, The Fear of the Lord is Wisdom: A Theological Introduction to Wisdom in Israel, is a necessary and extremely helpful resource for Christians who maintain a high view of Scripture.  Due to the current challenges facing the Wisdom Tradition, it is not easy for a pastor or lay person to navigate such terrain without some help.  Longman’s book is that help.  He directs his readers to the concept of wisdom and from there engages with wisdom as a tradition, school, and genre.

The book is divided into five parts.  The first part, “The Heart of Wisdom,” examines the Old Testament books commonly associated with wisdom: Proverbs, Ecclesiastes, and Job.  Longman examines these texts in order to expose what they actually reveal about wisdom.  His conclusion: wisdom is practical, ethical, and theological.  First, wisdom is practical because it gives instruction on how to live in the world.  Second, wisdom is ethical because it exposes moral behavior.  Lastly, wisdom is theological.  The latter point is most important as far as Wisdom in Israel is concerned because a person cannot be called wise without a proper relationship to Yahweh: “The fear of the Lord.”

In the second part of the book, Longman examines “Wisdom Elsewhere in the Old Testament.”  He uses Deuteronomy, Psalms, and selected prophets to confirm the three-fold concept of wisdom.  Longman also highlights specific characters that serve this end, namely Joseph, Daniel, Adam, and Solomon.  Each character demonstrates wisdom through their interactions with others.

In the third part of Longman’s book, “Israel’s Wisdom: Cosmopolitan or Unique?” he investigates where wisdom comes from.  He begins by examining the “Sources of Wisdom” in the Israel.  Then he turns to the historical context of the ancient Near East and its wisdom texts in order to compare them to Israel’s.  He concludes that Israel’s wisdom is unique because it is theological in nature.  In other words, Israel’s wisdom requires a proper relationship with Yahweh.  With this settled, Longman next discusses some peculiar aspects within the Old Testament texts that pertain to this concept of wisdom, namely the apparent absence of covenant and law.  He concludes this section by showing that there is evidence to connect covenant and law to Israel’s wisdom.

In the next part, “Further Refining Our Understanding of Wisdom,” Longman interacts with retribution theology and the prosperity gospel.  Then he considers whether or not there were schools that perpetuated wisdom or if there were professionals who were trained to be wise, namely “Sages.”  To conclude this section, Longman addresses the issue of gender and its relationship to wisdom in the Old Testament by turning the attention toward a “redemptive-ethical trajectory.”  He also recognizes the difficulty many people encounter when reading and interpreting wisdom through the lens of gender and points them to the “Edenic Ideal,” where there was once gender equality (p. 210).  While on the topic of gender, he takes special notice of a movement that is perhaps elevating wisdom to a god-like status separate from the God of Scripture, the Sophia movement.  “Sophia” is the Greek word for “wisdom.”  Due to the movement’s questionable teachings, leaders in the church should be on the lookout for its possible resurgence.

The final part of Longman’s book is “The Afterlife of Israel’s Wisdom.”  Here he examines the wisdom found in the Apocrypha and the Dead Sea Scrolls.  Some of his humor is even revealed when he introduces the manuscript, Instruction-Like Composition B (4Q424), and comments, “This text wins the award for the least interesting and imaginative title given to it by modern scholars” (p. 239).  He concludes this part by looking in the New Testament for wisdom, and as one would expect the book of James is given special attention.

There are two appendixes at the end of Longman’s book.  Appendix 1, “Wisdom in the Twenty-First Century,” could not only be of great value to leaders in the church, but also for everyone else who desires to live life wisely.  I greatly appreciate the attention he gave to the common misunderstanding that the teachings of Scripture are clear and can be understood by everyone.  Indeed, if a person desires to be wise, they will recognize that Scripture is not clear (except for its essential teachings), and will work to understand them well, using good interpretive methods.  Likewise, the wise person will need to learn how to read and interpret circumstances and people through their daily encounters.  In order to apply a proverb at the right time, this is necessary, as Longman rightly comments, “Knowledge of the proverb alone is useless and even dangerous… One needs to know the proper time to apply the proverbs” (p.271).

In Appendix 2, “Is Wisdom Literature a Genre?”  Longman engages directly with Will Kynes’ challenge against the validity of a wisdom genre.  Longman’s response is an informed understanding of the developments that have taken place with genre since its inception with Hermann Gunkel’s form criticism.  Longman explains that genre is no longer a discrete category, but a term that is now in need of refinement.  In other words, keep “wisdom” as a genre and let “genre” evolve into a more specific and useful category to be applied where is fits best.

I recommend this book to any who may be interested in understanding biblical wisdom, and also how the fear of the Lord is essential to it.  The book is very engaging and refrains from unnecessary terminology, making it more accessible to pastors and lay people.  Additionally, the chapters are not very long, so it is easy to read and digest the contents of each one.