The First Epistle to the Corinthians, Rev. ed. 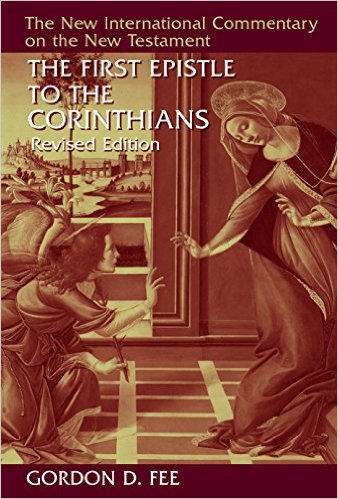 No one involved in any significant way in the field of New Testament studies over the past 40 years can be unaware of the name and the significant contributions of Gordon Fee. Now professor emeritus of New Testament studies at Regent College, Vancouver, Fee formerly taught at Wheaton College and Gordon-Conwell Theological Seminary. He first made a name for himself because of his expertise in the field of textual criticism, but he has since demonstrated his considerable skills in New Testament studies though a variety of articles, books, and commentaries, including two other contributions to the NICNT series, on Philippians and 1 & 2 Thessalonians. Indeed, he served as editor of the NICNT series from 1990-2012, though this revised edition of this commentary has emerged under the editorship of his successor Joel Green. Fee published the first edition of The First Epistle to the Corinthians in 1987 and it ran to 904 pages, making this revision some 140 pages longer. It’s worth it!

As in the first edition, Fee shows how the historical reconstruction of the situation in Corinth informs his interpretation of each passage. As well he makes important theological and practical applications of Paul’s message to the contemporary church showing how theology must be lived out in real life today. This is a significant feature of the commentary not always present in critical commentaries.

Besides the book’s increased length, a few other basic changes are worth noting. This edition is based on the updated NIV (2011). Fee frankly laments the inadequacies of the original NIV’s rendering of 1 Corinthians, and because he has served on the Committee for Bible Translation that oversees the NIV since 1990, he was able to steer the translations into better renderings. He notes in the preface, reflecting on the first edition of The First Epistle to the Corinthians, “I have been happy, therefore, to eliminate some twenty footnotes from the first edition where the original translation [of the NIV] appeared to be patently incorrect” (p. xvi). In fact, in some footnotes in this second edition he defends the 2011 NIV’s improvements over the original, including the move toward more inclusive language. In addition, in this second edition Fee seeks to interact with the considerable scholarship in the study of this Corinthian letter in the quarter-century since the first edition. Finally, he notes that he has eliminated “chapter and verse” language throughout since it was “totally foreign to the first-century author,” though he does enable readers to find things in his commentary by using parentheses.

I wrote a review of Fee’s first edition of The First Epistle to the Corinthians in the Journal of the Evangelical Theological Society 32 (1989): 391-392. In it I opined, “Fee has given us a paradigm of what a commentary should be. Even where one might disagree, no one—layperson, pastor, scholar or student—will find Fee’s volume a disappointment.” Nothing has changed my opinion; this second edition only adds to my appreciation for what he has given the church.

I emphasize again: this commentary merits and will reward careful attention. Here you will find the work of a mature and judicious scholar. In a short review it’s not feasible to comment on all of Fee’s significant contributions to our understanding of 1 Corinthians. So I decided that I would compare some of the observations I made in my JETS review of his 1987 first edition with what Fee says now in 2014. He reaffirms his view that the basic issue Paul addresses in 1 Corinthians is not Paul’s response to various presenting problems, the main one being the division of the church into parties. Rather, as before, Fee locates the essential issue as a conflict between the Corinthian church and Paul, its founder (see pp. 5-16 for his defense). In the problematic 5:5, he again defends the view that “the destruction of the flesh that the spirit might be saved on the day of the Lord” refers to a remedial process, not the man’s physical death at the hands of Satan. Fee’s defense of this conclusion is more robust than formerly. He still doubts that “you were washed” (6:11) is a reference to physical baptism.

The 2011 NIV vastly improves the translation of 7:1 in which, Fee argues, Paul quotes a slogan of his readers, and while partially agreeing, qualifies his agreement in significant ways. Paul may agree that it’s good not to engage in sexual relations, but only under certain circumstances, not as an absolute prohibition. Paul is no ascetic and refutes those at Corinth who may believe sexual abstinence is the spiritual state. He again supports the view that the “unmarried” in 7:8 refers to widowers, not unmarried people in general.

Fee confirms his earlier view of the “food sacrificed to idols” question as primarily a matter of participating in the cultic meals in the actual precincts of pagan temples–and eating the food there (8:10 is central to his argument)–rather than a more general concern with food sold in the marketplace that had formerly been a part of temple sacrifices. Of the options about women’s head covering, Fee opts again for the traditional view that it refers to some kind of external covering (e.g., a veil), not some reference to their hair, whether short or loosed. Fee does not see hierarchy in view in Paul’s use of “head” as a metaphor in 11:3, but rather some idea of source, source of life, or origin. A woman praying or prophesying with an uncovered head brings shame on male/female relationships. Fee adds an addendum at the end of 11:6 that includes a considerable bibliography of works directed to this issue since the appearance of the first edition. He still prefers “freedom or right to choose” to explain the “authority” a woman has over her head.

Charting out new ground for a commentary, in this second edition Fee locates his comments on 14:34-35 after his comments on 14:40. He notes that manuscripts locate the verses either after v. 33 or after v. 40. He believes that the verses are a scribal interpolation into the text; Paul did not compose them. He understands how a scribe might insert the verses after v. 40 since they make at least some sense there, but they make no sense following v. 33. We have an example of a major displacement in the manuscript tradition which, Fee argues, “should cause any NT scholar to have serious doubts as to its authenticity, even more so when one adds to this the considerably un-Pauline way of saying things that occurs in this passage” (p.780). Because of the push-back he received in the first edition, Fee takes even more pains here to argue that these verses are a non-Pauline interpolation into the text of the letter. Fee rejects the arguments of many who saw his position (which he also defended in the first edition) as theologically driven. He insists that his conclusion that Paul did not write these two verses rests solely on text-critical grounds, and he challenges those who disagree to explain how and why these verses can occur in these two places in the manuscript tradition.

Since the appearance of The First Epistle to the Corinthians in 1987, several substantial commentaries have appeared, notably those by Anthony Thiselton (NIGTC, 2000), David Garland (BECNT, 2003), Joseph Fitzmyer (AYB, 2008), and Roy Ciampa and Brian Rosner (PNTC, 2010). With this revision, Fee has once again positioned his work in the top tier of the best available critical commentaries on this major Pauline epistle. Certainly it is now the most up-to-date.