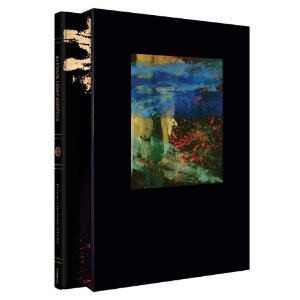 Makoto Fujimura is a well-established painter based in New York City. That is rare enough, since so many artists perish as artists in that high competitive art world. But Furimura, who is Japanese-American (the significance of this will become clear below), is an evangelical Christian. He has been associated with Redeemer Presbyterian Church, which is pastored by prolific and best-selling author, Tim Keller.

Fujimura has given major exhibits and received significant grants. But he is not a “religious” painter who depicts biblical scenes or characters. Neither is his public predominately Christian. He has carved out a reputation by the uniqueness and skill of his artistic vision, one that fascinates many. While he is a Christian, Fujimura does not draw his inspiration so much from classic Western realistic painters as from twentieth century abstract (or nonrepresentatinal) art and from artistic sensibilities and techniques from his native Japan. These involve novel application devices and pulverized metal. His works often radiate an incandescence rooted primarily in color and materials—not in perspective or direct representation. These paintings can be quite mesmerizing on paper (I have yet to see one in person). Fujimura does have themes in mind for each painting (however arcane these may be to some observers). He has written on his philosophy and practice of art in a book called Refractions: A Journey of Faith, Art, and Culture (NavPress, 2009), on his blog, and elsewhere. More of his paintings can be found in Soliloquies (2009), along with those of Georges Rouault.

Now Fujimura has illustrated the Four Gospels, which uses the English Standard Version. In so doing, the book continues the ancient Christian tradition of an illuminated manuscript. After the invention of the printing press, when Bibles would be mass produced, the illuminated manuscript fell out of favor for practical reasons. Theologically, one might worry that Christians would view the Bible more as an artistic ornament rather than the special revelation from God; but there is nothing intrinsically wrong with adorning Scripture with fitting illustration. Scripture itself speaks of “the beauty of holiness,” and the beauty of God himself, so there is no reason to forbid an illustrated Bible.

The editor of Crossway Publishers, Lane T. Denis, explains the solid rationale for this book in his preface. He quotes Fujimura as saying, “I can do nothing to enhance the Word of God. I can only tremble at the expanse of vision that the Word of God led me to during my work on this project.” This is good to know, since so many artists view their work as augmentations to or substitutes for divine revelation. The artist as Bohemian prophet is a false vision that often dogged and deranged twentieth century (or modernist) art. (On his, see R.J. Rushdoony, The Death of Meaning  [Ross House Books, 2002], chapters 5-6; and Jacques Barzun, The Use and Abuse of Art [Princeton University Press, 1975].) As a good Protestant and artist, Fujimura is not thus bewitched.

Denis explains carefully what contributions Fujimura makes to this book. They are extensive and multi-faceted:

Five large-scale paintings, including the frontispiece “Charis-Kairos (The Tears of Christ)” (64 x 80 inches), and four opening plates (48 x 60 inches), one for each of the four Gospels; eighty-nine initial letters, each painted (and many adorned with gold flecks and foil) specifically for each chapter opening throughout the Gospels; as well as more than seventy individually painted illustrated reflections and embellishments, complementing the Gospel text on each two-page spread throughout the Gospels.

Similarly, the cloth-bound covers of The Four Holy Gospels are adorned with dramatic gold foil and red foil flourishes, representing the glory of God revealed in the four Gospels, and blood of Christ poured out on the cross.

Fujimura writes a short introduction explaining what he has done in the book and delving into his methods and aims. In the last two paragraphs he evinces a deep sense for the sorrows of the twentieth century, and the hope that only Christ can bring. “May we be deeply aware that Christ’s tears shed two millennia ago are still powerfully present in this world, as the medium of hope and new creation.”

But, one may ask, how can an essentially abstract painter illustrate a Bible, beyond augmenting the lettering? My response may disappoint the reader, but one must simply come and see. One can make out some figures (such as the tree on pages 16-17), but in other cases one is left with more of a feeling of wonderment. However, the illustrations never overwhelm the text itself. In other words, I take this project to be a success, but not an uncontested success. Some will be left puzzled or disappointed.  It does break new ground without being innovative for innovation’s sake; the curse of much modernist art.

The Four Holy Gospels is a large and expensive volume that comes in a sturdy and gorgeous slipcover. But it is far more than a coffee table book (although it will not fit on most bookshelves). It should be read and beheld, beheld and read. For many, it will be celebrated as the revival of a venerated and august art form.