The Fourfold Gospel: A Theological Reading of the New Testament Portraits of Jesus 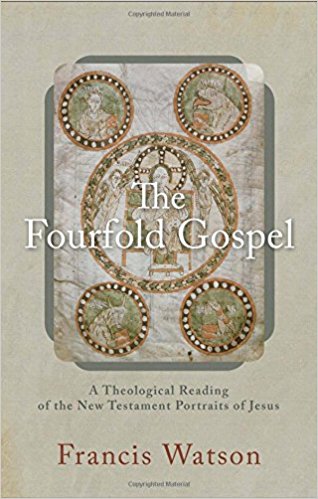 Having previously taught at the King’s College London and the University of Aberdeen, Dr. Watson is currently research chair in biblical interpretation at Durham University in the UK. His research interests have been wide-ranging resulting in major publications in Pauline studies, as well as work in the Gospels since his arrival at Durham in 2007. The book under review obviously fits in that latter category—following a previous book, Gospel Writing: A Canonical Perspective, which addressed the issue of what it means for a gospel to be “canonical” or “noncanonical.” The book entered into controversial territory arguing that Luke had access to Matthew’s Gospel, as well as Mark, thus obviating the need to postulate the existence of Q.

The Fourfold Gospel also concerns the issue of the canon: in this case, why are there four gospels in the canon, and how they function together to relate the one gospel. Why did the canonical four, as diverse as they are, make it into the canon, and not other gospels that appeared in the church’s early centuries? In the course of this study we learn more about Tatian’s “Diatessaron,” the contributions of Irenaeus, Origen, Jerome, as well as Eusebius’ canons.

The book proceeds in an orderly fashion, first by considering how the fourfold gospel came into existence in the second century (rooted in the first). He considers the origin of the term “gospel” itself, and whence came the traditional names of the four authors. We can speak of the “gospel” of our Lord Jesus Christ, but also of the four Gospels. Why? Watson then considers each of the four canonical gospels in turn, focusing first on their beginnings, which, he argues, displays the distinct theological perspectives they bring to their study of Jesus the Christ. Intriguingly, he points to the images of the four living creatures in Ezekiel and Revelation—the human, the lion, the calf, and the eagle—to illustrate how each Gospel will depict the Christ.

He devotes an interesting chapter to Eusebius’ canon tables (his chapter 5), terming it one of the most impressive achievements of early Christian scholarship. I possess and have read Eusebius’ Ecclesiastical History, but I confess I previously knew little about the canons and have certainly not appreciated their significance. Watson helps readers grasp how momentous an achievement they are. (They are found in Nestle-Aland, Novum Testamentum Graece, 28th ed., pp. 85-86, 89-94, and the apparatus in the inner margins of the text).

Then in chapters 6 and 7 Watson moves to the endings of the Gospels—what each does in its passion narrative where the same story is told four times: Jesus’ triumphal entry, Gethsemane, the crucifixion, and the empty tomb. Watson shows how Eusebius’ canon tables shed light on the different ways the gospels relate to each other by how they narrate the final days of Jesus’ life. The genius of chapters 1-4 (on the Gospels’ beginnings) and chapters 6-7 (on their endings) is Watson’s practice of reading the Gospels alongside each other and at the same time (using Eusebius as a guide). It’s another way of reading the gospels horizontally (e.g., using a synopsis of the Gospels), or through the lens of redaction criticism—to appreciate how the gospels portray their messages in distinct and complementary ways. We find that the (singular) gospel of our Lord Jesus Christ emerges in such a way that the end result is different from but greater than the sum of the parts.

That takes Watson to his final chapter 8 where he considers the Truth of the Gospel. Rather than producing a dry and esoteric study of interest only to scholars, Watson shows how the gospel stories in all their complexity have the capacity to be life-changing. On this score, students and pastors will also relish what he has to say. To do this he presents four case studies in order to “uncover ways in which gospel truth has been asserted in the past, in the hope that these will prove instructive for the present” (p. 171). Considering (1) Justin Martyr and the Eucharist, he concludes: “The truth of the gospel is not some inert correspondence between text and referent. Its capacity to transform must constantly be rediscovered as the gospels are read, interpreted, heard, prayed, and lived” (p. 172). We then encounter (2) Origen and his apologetic treatise Against Celsus, followed by (3) Martin Luther’s “Form and Content,” and finally (4) “The One Word” from Paul the Apostle. From these Watson draws some profound conclusions. A few sentences must suffice: “The gospel rules out a non-Jewish Jesus. Neither is it a credible source for a Jesus accommodated to the current demand for a spirituality without church, scripture, or doctrine. Such a figure would not be the one Word of God of whom the gospel speaks.” …  “God is no less present in the words and actions narrated in the gospels than is Jesus himself. That this is so is already clear from the additional name reserved for Jesus long before his birth: Emmanuel, God with us” (188).

This is a highly-instructive and illuminating study. We learn not merely some arcane mechanics about how the Gospels were produced and preserved, but how they work together individually and collectively to convey a divine message of utmost importance. We see why we need all four; we see why the canonizers put them in the order they did; we see how each is masterfully constructed, and how they conspire together to present the glorious message of our Lord Jesus Christ who is truly good news! And we see how the Holy Spirit was at work in the preservation and choice of the canonical Gospels no less than in their inspiration and origin.