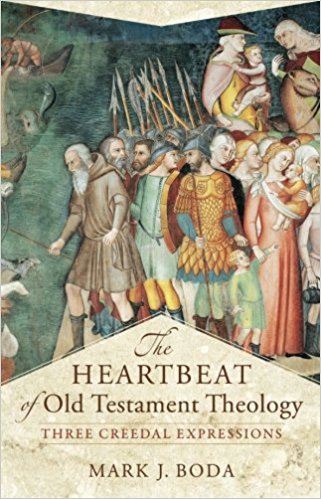 Mark Boda provides a wonderfully useful approach to Old Testament theology in a relatively brief volume.  He identifies three creedal expressions that point to an understanding of God and the divine relationship with humanity.  The preface reflects Boda’s preparation for this broader approach to theology in his doctoral thesis work (on Nehemiah 9) while the introductory chapter surveys some major Old Testament theologians of the twentieth century and then turns to enumerate the three expressions: narrative, character, and relational creeds.  In identifying these, Boda identifies those ideas that are significant through repetitive phrases, expressions, and structures.  Major contributors to these perspectives included Geerhardus Vos, George Ernest Wright, and Gerhard von Rad.  In line with these earlier contributors, Christoph Barth noted the fact that God acts as at the heart of the confession of the Old Testament.  The basic elements of this creed include:  ancestors, exodus, wilderness, conquest, land, and exile.  They present God’s redemptive action toward Israel.  Boda discusses briefly how each of the six themes appears in various texts throughout the Bible.  Through patience and discipline God works to achieve his relationship with people.

The second confession or rhythm consists of God’s character, most of all apparent in summary fashion in Exodus 34:6-7.  This is not a recital of events but nevertheless a confession (so G. E. Wright).  Boda refers to Childs as observing how the frequent use of various parts of this formula throughout the Old Testament testifies to its centrality in the understanding of God’s character.  Yahweh’s self-revelation, a major theme of the book of Exodus, transcends anything found in Genesis.  Yahweh’s character is found in his actions as described in Exodus 34:7.  As Boda observes, we regularly come to understand someone’s character on the basis of their actions before we evaluate what they claim about themselves.  Both the ontological characteristics of 34:6 and the functional ones of 34:7 contain the word hesed, a reference to God’s steadfast love and mercy.  From this characteristic, God forgives and also punishes sin.  Both his love and his strength serve as his character and the way in which he acts for Israel in the exodus and conquest.

Boda’s third creed is his relational identity.  In this perspective he refers to the work of Walther Eichrodt and of Rolf Rendtorff.  This confession is embodied in the covenants that God creates, especially those with Abraham, Moses and Israel, priests, and David; and also in his presentation of the New Covenant.  Boda discusses the promissory and obligatory nature of especially the first four of these covenants, concluding that elements of both can be found in the biblical texts for all the covenants.  Genesis 15 and 17 provide two covenant texts where Israel as God’s covenant people is mentioned.  In the confessions of Exodus 5:22-6:8, Nehemiah 9, and Exodus 20:2/Deuteronomy 5:6, the three rhythms appear with the character creed coming first in Exodus and the Decalog and the relational creed coming last in all three.

In chapter 6 Boda turns to consider the creational aspect of the creedal rhythms.  Creation as well as redemption is an element of these.  After considering Nehemiah 9, Boda considers various Psalms that praise God as creator, sustainer, and ruler of creation.  The character aspect of God as creator is no more prominent than in Isaiah 40-55, but also in the other prophetic books (especially Jeremiah and Amos).  In Genesis 7-9 the story of the flood outlines a reversal and renewal of creation, drawing on themes and imagery in Genesis 1.  Although the word for covenant does not appear for the first time in Genesis 9 (contra p. 99), God does re-establish a relationship with humanity and all of creation.

Turning Old Testament theology in a New Testament direction, Boda emphasizes the importance of progressive revelation.  While stressing the important role of the Old Testament in the New, Boda refers to Schaberg’s interesting idea that the women in the genealogy of Matthew 1 prepare the reader for a woman who is wronged or thwarted, endangered, and yet has ensured for her the birth of a child who can repair social issues.  He goes on to discuss Peter (Acts 3), Stephen (Acts 7), and Paul (Acts 13), as well as others who use the Old Testament rhythms in their proclamation.  The sense of a narrative creed continues with Christ’s death, resurrection, ascension, and proclamation.  Examining the Septuagint rendering of Exodus 34:6-7, Boda finds these terms in the New Testament epistles and discusses their implications for God and Jesus Christ.  The relational rhythm emphasizes Sonship and peoplehood, as well as covenantal terms and acts of Jesus and the early Church.  The overall goal is that of creating a redeemed community.

Boda moves to the present age.  For Christians, the narrative rhythm must be recaptured in the life of the Christian calendar, liturgical acts (especially Communion), in the communal nature of salvation, and in the manner in which we understand and proclaim the gospel in its full revelation to God’s people in the Old and New Testaments.  The character rhythm needs to be rediscovered in a God who is personal and who loves, blesses, and disciplines. The relational aspect includes a sense of responsibility and accountability in a relationship with God, along with the importance of the family as a model for God’s community.  The creational sense includes fulfilling the creation mandate in the world as well as in the church.

In his postscript Boda presents the Tent of Meeting as a separated space of intimacy with God and applies this to the lives of modern Christians. Referring to Sinclair Ferguson’s wonderful challenge to constantly ask, Do I have a personal knowledge of God?, Boda notes that we do have a mediator to Christ’s direct presence, that one being Jesus Christ.

Boda concludes with a (further) appendix where he observes that the Trinitarian God of the New Testament is same creator and redeemer God of the Old Testament.  Boda appreciates the distinctions between various books of the Bible but believes that the macroconnections of biblical theology remain possible.  He seeks the summaries and key areas that lay at the core of Israelite theology, beginning with Exodus 34:6-7.  The character of Old Testament revelation is communicative, incarnational, inscripturated, authoritative, and cumulative and progressive.  There seems to be significant overlap between these.  Boda goes on to provide a variety of ways that the Old Testament connects with the New and concludes with some observations on the interpretation of Scripture.

After reading the book, I remained unclear as to how the terms, creed and rhythm, assist in understanding what might be more simply identified as themes or trajectories.  Nevertheless, this work is an excellent introduction to Old Testament theology.  At the same time, Boda provides personal challenges for the study of the Old Testament as a means of Christian discipleship.  I highly recommend it.