The Horsemen of Israel: Horses and Chariotry in Monarchic Israel (Ninth-Eighth Centuries B.C.E.) 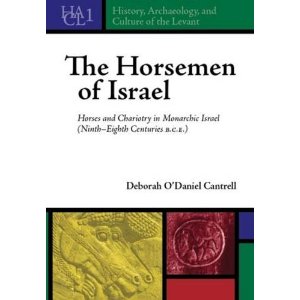 O’Daniel Cantrell has recreated the world of horses in ancient Israel.  In doing so her expertise as an equestrian and her two decades of research in biblical and archaeological sources have enabled her to translate this subject into a well-written synthesis of good writing and research.  Already in the introduction, one learns that the mid-second millennium B.C. Hurrian kikkuli horse training text from the ancient Hittite kingdom preserves techniques of interval training and other subjects on equine care still in use today.  The basic theses of the work appear here, as well.  The focus in ancient Israel will be the period from c. 925 B.C. until 722 B.C.  During these two centuries the horse (and chariot) in both the northern and southern kingdoms played a decisive role in the relative independence of these two states.   Horse training facilities could be found at the major excavated cities of ancient Israel.  Megiddo preserved stables for 450 horses to be trained.  Both Lachish and Jezreel also revealed stables as well as courtyards.  Together these facilities alone allowed thousands of horses to be processed.  Four- and six- chambered gates at many fortified centers in Israel provided hitching stations at these chariot cities and thus created a defensive network that extended across Judah and Israel.

Chapter 2 considers the nature of the war horse, an animal with an “addiction to speed.”  Job 39:19-25 depicts how the excitement of a horse’s anticipation of battle overcomes its natural tendency to flee danger.  Horse blinders serve to limit the horse’s nearly 360-degree range of vision and thus limit objects around it (such as approaching chariot wheels) that might create terror and cause it to bolt.  The same is true of a horse’s hearing.  The ancient grooms might lead their horses through crowded city gates to desensitize them to noise and distracting sights.  Horses can also be affected by scents and possess a much keener sense of smell than humans.  As in modern training, ancient horses no doubt had a strong scent of some sort rubbed on their nostrils to prevent distractions from scents such as those of camels, mares, and other frightened horses.

In battle it is likely that geldings were used, as they would have been easier to control.  The horse not only bore the warrior and pulled the chariot.  It also could be trained to crush an enemy with its hooves.  They would continue in battle until they collapsed from exhaustion.  Thus it was necessary for their riders and managers to see that they were changed and given a rest at intervals no greater than every hour or two.  Horses were difficult to kill in battle.  Arrow and spear wounds incite them.  It may take hours for a horse to bleed to death and so these wounds do not kill.  Other than an axe blow between the eyes, the best way to incapacitate a horse is to wound it at or below the knee.

During the period when the kingdoms of Israel and Judah flourished, the success of any battle depended on immobilizing “the enemy by capturing their horses and destroying their chariots” (p. 37).  Horses do not appear in Israel’s earliest records nor do they receive much mention in the law collections of the Pentateuch.  They come on the scene with Absalom’s rebellion against David (2 Sam 15:1) and in Solomon’s acquisition of horses (1 Kgs 10).  David hamstrung horses captured in his battles (2 Sam 8:4; 1 Chr 18:4).  Depending how this procedure was carried out, it would not permanently cripple the animal; but prevent it from trotting for weeks or months.  Thus it provided a means for the formative years of the Israelite kingdom to capture and control horses, and to later resell or use them for their own purposes.

O’Daniel Cantrell attributes the absence of hamstringing horses in other countries to their better ability to capture and control horses on the battlefield.  The ancient Near Eastern and biblical sources attribute thousands of horses to Israel, along with a correspondingly large number of chariots.  O’Daniel Cantrell argues that the rich pasture land and resources of Iron Age Israel, along with the evidence for maintenance of horses and chariots in the major cities, made these numbers not only possible, but also desirable.  The horses and chariotry of Israel and Judah maintained a relative independence for their states despite being surrounded by the superpowers of Egypt, Babylon, and Assyria.  Finally, the author notes the divine role given to horses and chariotry in texts such as 2 Kgs 2:12; 6:15-17; 13:14; Ps 68:18; 104:3; Zech 1:8-11; 6:1-5.

The chariotry provided further increases in speed already available with a mounted horse that could travel at forty miles an hour.  Chariots were more comfortable, did not require roads on which to travel, and could cover the entire distance from Dan to Beersheba in about six or seven hours (see the charts on pp. 66 and 79 for further on distances and times required within Israel and Judah).  Chariotry increased the power of armed warriors greatly.  “Tactical units of as few as a dozen chariots could neutralize an infantry of thousands on the battlefield, through deadly arrows and the ensuing panic” (p. 73).    By the end of the seventh chariot, however, a thousand years of chariot warfare had become obsolete and was replaced by mounted archers and infantry.  After Darius I (522-486 B.C.) infantry become dominant.

A relatively long chapter examines the role of Megiddo in the Monarchy and its provisions for horses and chariots.  By accepting the later dating proposed by Finkelstein, O’Daniel Cantrell must find another site for the formation of Ahab’s large chariot force.  She chooses Jezreel, which also represents a fortified city that possessed the necessary resources for horse breeding and training.  Reviewing the role of horses and chariotry in battles of the Bible, it becomes clear that they played a key role that shaped Israel’s history and politics.

O’Daniel Cantrell’s work is strongly recommended as a key resource for understanding the important position horses in the world of ancient Israel.  There is little to quibble with in the book.  While one might argue with some of the dates for various biblical events, the differences have no impact on the overall presentation.  It might have been nice to have more illustrations from the pictorial representations of horses and chariotry in the ancient Near East.  However, this does not affect the purpose of the text.  Indeed, the book is a model of writing and the presentation of as academic subject in a readable and fascinating style.