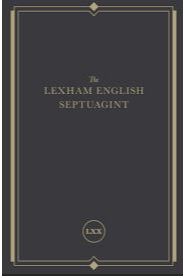 A second distinctive about the Lexham Septuagint translation is that it provides a translation free from direct influence of other modern English translations that follow the Masoretic Hebrew text.  The Oxford Study Bible follows Brenton’s 1851 translation as well as the NKJV.  The NETS edition has followed the wording of the NRSV wherever the Septuagint is deemed to concur with the Masoretic Text.  Such concurrence is somewhat subjective although it can be helpful for an English comparison between the Greek and Hebrew texts.  The Lexham translation is based upon the work of translators who relied upon no existing translation.  As one of the many translators, I familiarized myself with existing translations of the Hebrew text, but endeavored to produce a translation of the Septuagint separate from any in existence.  This approach allowed for the translation to develop its own style following the unique Greek style of each Septuagint book.  Some of the later Greek-only books, unique to the Septuagint and not found in the Masoretic Text, possessed at least two distinctive expressions in Greek.  These were rendered as two separate texts, with the Alternative text (not occurring in Vaticanus) placed at the end of the Lexham volume.  These include: Tobit, Daniel, Susanna, and Bel and the Dragon.

The books of The Lexham English Septuagint are ordered generally according to the Protestant and Roman Catholic (with the inclusion of the Apocrypha and books such as 3 and 4 Maccabees) canons of the Old Testament.  Within each book the chapter divisions follow Vaticanus.  Recensions, such as Lucian or the non-Theodotion text of Daniel, are not included.  There are few footnotes in this version, occasionally explaining Swete’s inclusion (or non-inclusion) of text, meanings of some expressions, and significant differences with Hebrew vocabulary.  Most pages have one or more brief, summary descriptions of content in the margins.

It is surprising that the Lexham translation showed no awareness (in its introductory discussion) of the Septuagint Commentary Series (SCS), which has published thirteen volumes on fourteen separate books of the Septuagint, using Vaticanus as its primary text.  Published by Brill under the editorship of S. E. Porter, J. A. Jarick, and me, each volume includes a copy of the Greek text, an original translation, and a commentary primarily concerned with the literary structure of the Greek text on its own.  In this manner Lexham concurs to a large extent with SCS, which produced its first volume (A. G. Auld, Joshua: Jesus Son of Naue in Codex Vaticanus) in 2005.  Both are based on a single extant ancient Greek text, usually Vaticanus, and both produce an original translation of each book.  The use of an extant text and an original translation has many positive points that I have discussed elsewhere (cf. “Setting Scholarship Back a Hundred Years? Method in the Septuagint Commentary Series,” pp. 63-68 in L. K. Fuller Dow, C. A. Evans, and A. W. Pitts eds., Language and Literature of the New Testament: Essays in Honor of Stanley E. Porter’s 60th Birthday [Biblical Interpretation Series 150; Leiden: Brill, 2016]).

The Lexham English Septuagint is a great achievement.  Publishing a printed edition is a welcome move.  It is hoped that this work will take its place alongside NETS and the other translations already mentioned as a means to better understand and appreciate the value of the first translation of the Hebrew Bible and one that found its enduring significance for Christians in its use in the New Testament as well as in the Church.