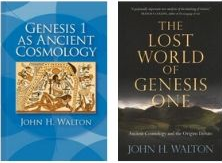 The Lost World of Genesis 1 contains eighteen sections or points that Walton teaches about the first chapter of the Hebrew Bible. These range from demonstrating functionality and temple imagery (two points he also makes in the second book) as well as how a non-material origins view of Genesis 1 aids Intelligent Design arguments in the general public setting. One important distinction Walton makes is that the origin stories of the Ancient Near East, Genesis 1 included, attempted to make certain religious statements and ontological understandings about the world surrounding that people group (Lost World pp. 12, 15). Walton also shows that at the root of modern origins debates is the same argument of purpose (Lost World Propositions pp. 13-18). This functional understanding of Genesis 1 helps to answer the questions of how we are alive and for what purpose God has made us.

Genesis 1 as Ancient Cosmology is broken into several sections, the largest section dealing with the cognitive environment of the Ancient Near East and Walton’s reasons of how Ancient Israel shared in this common cognitive atmosphere. Walton spends several pages expanding on similar understandings of ontology found in Israelite and other Ancient Near East writings such as Egyptian and Mesopotamian literature. He notes that modern ontology of material creation does not belong in the functional ontology found in Genesis 1, mythological, and religious texts of the Ancient Near East. This shows in the text of Genesis 1 in how days 4-6 of creation fit as functionalities into the functions previously provided in days 1-3 (i.e. the sun created on day 4 serves as the functionality to fit the function of the light created in day 1). It also serves to explain why, as Walton notes, God calls the light “day” instead of “light” (Ancient Cosmology p. vii). He dismisses the demythologization of the Genesis 1 text that Gunkel and others propose and he agrees with Tsumura’s understanding that a shared cognate root word is used (*tiham) rather than the depersonified Mesopotamian goddess Tiamat underlying the deep waters found in Genesis 1:2 (Ancient Cosmology p. 140).

Another equally important concept that Walton considers is the importance of the first words of the Hebrew Bible bereshît bara’ ’elohîm to the understanding of toledot and the discussion of dividers within the book of Genesis. Walton’s discussion of the inappropriateness of using toledot to begin the very first story of the Hebrew Bible and hence the appropriateness of bereshît marks a different understanding than that of von Rad and other authors who grapple with Wellhausen’s hypothesis and the question of parashah separation in verses 3 and 4.

Following a criticism I read regarding Walton’s understanding of bara’, I examined the claim of differing meanings in the Piel and Qal roots. The Brown, Driver, Briggs lexicon separates the root of Qal from the Niphal and from the Piel. The understanding that only God can bara’ (in the Qal in Genesis 1) an object would not be correct if the Piel form has a similar or the same etymological root, because of the human uses in the Piel. Gesenius’ lexicon aids Walton’s point (Ancient Cosmology n.17, p.140) that both the Qal/Niphal and Piel bara’ are linked in roots and refer to a separation or creating a function. Walton shows that the Hebrew bara’ and Akkadian banu both show creating a functional purpose rather than a material creation (Ancient Cosmology p.24).

Even after reading Walton’s chapter on temple imagery in Genesis 1, confusion remains as to why this is introduced into the discussion of Genesis 1. Walton’s discussion of the Gudean cylinder and other examples he uses seem pushy at best. This temple imagery observed by Walton (Ancient Cosmology p.187) and other scholars (such as J. D. Levenson, “The Temple and the World”) seems like it better belongs in the context of Genesis 2’s garden imagery than in Genesis 1’s cosmological imagery.

Though Genesis 1 as Ancient Cosmology is a technical book meant more for university and seminary conversations, I find it also helpful to consider questions a layperson might have when reading comparative studies of the Bible. I believe that the Genesis 1-11 chapters function much as prehistory purpose stories to teach a functional lessons to the earliest peoples of God (explanations for pain in childbirth, marital problems, rainbows in the sky) thus eliminating the need to seek a scientific approach to Genesis 1. However, for the layperson who reads the narrative literally, how could one teach the doctrines of gender equality, image and likeness of God within humanity, and creation involving all three Trinitarian Persons? How does the layperson combat non-theistic evolutionary thought if the primary text for the defense of material origins is instead seen as ontologically functional rather than ontologically material? The Evangelical concept of dictation theory regarding the Christian Bible seems unable to handle these comparative studies concepts. These are the concerns that the second review I mentioned and several other scholars highlight as a problem for the anthropological foundations that one finds in a functional rather than material understanding of the first chapter of Genesis. This discussion, however, is outside of the scope of Walton’s two books. For that conversation, I would recommend God’s Word in Human Words by Kenton Sparks.

I see that Israel shares what Walton calls a cognitive environment with the surrounding nations, but the question is asked of just how much sharing was accomplished between these great nations and the tiny area Ancient Israel occupied. We know that sharing of a cognitive environment does not necessarily lead to complete shared customs or religious beliefs. If limited sharing was accomplished, then the Genesis 1 story would have a great number of unique concepts that separate it from other origin stories in the Ancient Near East. If even partial sharing of a cognitive environment was accomplished between the many nations, then we should seek to answer how that impacts the process by which the Holy Spirit breathed the Bible to the human authors. Genesis 1 as Ancient Cosmology is fairly technical for a layperson so I would recommend Walton’s The Lost World of Genesis 1 for much of the same content. However, the cognitive environment that Walton proposes in these books is invaluable in interpreting concepts found across the Hebrew Bible and in the Christian New Testament.