The Making of an Atheist: How Immorality Leads to Unbelief 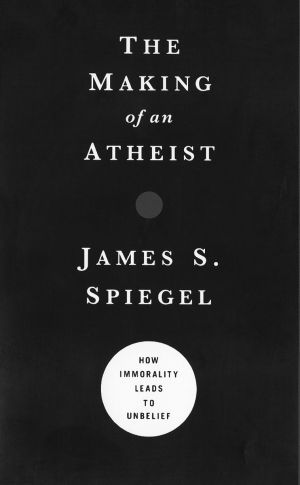 Philosopher James Spiegel has written a clear, biblically-informed, philosophically-astute and well-documented account of the ultimate origins of atheism, which is increasingly raising its often ugly head in American and European culture. Unbelief, he argues, is not attributable to a lack of evidence for God. Rather, the problem is fixed in human rebellion against God himself, just as Paul explained in the first chapter of Romans. This book provides a much needed dimension of analysis in light of all the press received in the past few years by “new atheists” such as Richard Dawkins, Christopher Hitchens, Daniel Dennett, and Sam Harris.

Some of those who believe that atheism is rooted more in rebellion than in argument foreswear the need for any constructive case for theism or for particular Christian beliefs. This is not so for Professor Spiegel. Instead, he argues that the evidence supports theism (the laws of nature, the existence of the universe, and the emergence of life) and that naturalism is self-defeating since it cannot account for human rationality (summarizing Alvin Plantinga’s argument).  However, Spiegel makes the unnecessary disclaimer that his book is not trying to show that theism is true or more rational than atheism (23). But it seems to me that he does just that, even given the brief exposition of his arguments. Undue epistemic humility often backfires in apologetics.

But positive apologetics is not the main purpose of his book. Spiegel aptly summarizes his book’s thesis on pages 113-114.

The descent into atheism is caused by a complex of moral-psychological factors, not a perceived lack of evidence for God’s existence. The atheist willfully rejects God, though this is precipitated by immoral indulgences and typically a broken relationship with his or her father. Thus, the choice of the atheist paradigm is motivated by non-rational factors, some of which are psychological and some of which are moral in nature.

The hardening of the atheist mind-set occurs through cognitive malfunction due to two principle causes. First, atheists suffer from paradigm-induced blindness, as their worldview inhibits their ability to recognize the reality of God that is manifest in creation. Second, atheists suffer from damage to their sensus divinitatis [the sense for God’s existence], so their natural awareness of God is severely impeded. Both of these mechanisms are aspects of the noetic effects of sin.

Spegiel is, it seems, trying to give a best explanation argument for atheism, which is based on a Christian account of such. Since it is as rational to believe in theism, how can we account for atheism? Chapter three, “The Causes of Atheism,” makes this case. However, Spiegel does not specifically lay out the specifics of how such an argument works. What, exactly, is a best explanation? What are the germane criteria, and so on? Of course, Spiegel’s argument would be stronger if he claimed that theism is more likely true than atheism. Nevertheless, since atheists attempt to explain away theism psychologically (as wish fulfillment, the “opium of the masses,” or an evolutionary quirk), turnabout is fair play. Atheists may find themselves looking in an unexpected mirror. Some, like noted philosopher Thomas Nagel, openly confess their antipathy to God. Nagel admits in The Last Word (Oxford, 1998) that theism repulses him at a level deeper than its “objectionable moral doctrines, social policies, and political influence” or its “acceptance of empirical falsehoods.”

I am talking about something much deeper—namely the fear of religion itself. I speak from experience, being strongly subject to this fear myself: I want atheism to be true and am made uneasy by the fact that some of the most intelligent and well-informed people I know are religious believers. It isn’t just that I don’t believe in God and, naturally, hope that I’m right in my belief. It’s that I hope there is no God! I don’t want there to be a God; I don’t want the universe to be like that (10-11).

Nagel makes similar comments in his more recent work, Mind and Cosmos (Oxford, 2012), where he speaks of his “ungrounded” unbelief in God, despite the need to move beyond naturalism to explain the apparent design of the universe.

After articulating the intellectual and moral errors of atheism (a case of negative apologetics), Spiegel concludes with a brief but insightful chapter called “The Blessings of Theism.” Here he explains that Christian theists can develop intellectual and moral virtues and live honestly before God. They are free to both complain to God and praise God. All aspects of the human personality can be offered to a personal and moral Creator, thus insuring human flourishing in ways impossible for atheism. Atheism is simply incompatible with a life well-lived (shalom). In this he is appealing to a criterion for testing worldviews that I articulate in Christian Apologetics (InterVarsity, 2011):

Atheists may complain that Spiegel is poisoning the well or begging the question against the unbeliever, that he simply assumes theism and then dismisses atheism as something morally and intellectually defective. This is not so. Contrariwise, as mentioned, Spiegel does not disavow arguments for theism; but instead of pursuing that (very common) route, he considers the psychology of atheism from the vantage point of biblical theism. (In this, his book is similar to R.C. Sproul’s earlier work, If There is a God, Why are There Atheists? (Bethany Fellowship, 1978) as well as Soren Kierkegaard’s The Sickness Unto Death.) The atheist who reads this book is therefore enjoined to consider whether or not the biblical explanation of the origin, nature, and continuation of his unbelief may, in fact, ring true. Some soul searching is in order.