The Myth of Junk DNA 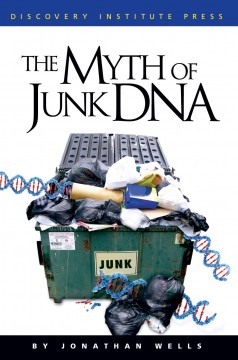 The battle for the meaning of everything continues to be waged by evolutionists and Intelligent Design (ID) proponents alike. Neo-Darwinian evolutionists, like Richard Dawkins, Kenneth Miller, and P.Z. Myers, frequently reference the “Junk DNA” as a scientific fact and evidence that human beings are not created by some intelligent designer, but are instead the current product of chance and time.  In The Myth of Junk DNA, Jonathan Wells, an ID proponent and author of Icons of Evolution and The Politically Incorrect Guide to Darwinism and Intelligent Design, confronts these claims by looking at the scientific data, the materials and methods some scientists have used in their experiments, and the naturalistic presuppositions –or scientific ignorance– of those who still hold the Junk DNA hypotheses.

Although not divided by any specific notation or markings, The Myth of Junk DNA seems to be divided into three sections. In the first section, Wells sets the stage and the argument for the rest of the book.  In the first chapter, Wells describes the current controversy, showing the difference between micro- and macroevolution and the improper conclusions some scientists draw from the existence of the former. He then, in a brilliant transition, introduces several of the “Icons of Evolution” including, but not limited to, the tree of life, homology, and Haeckel’s embryos (these, as well as other icons, can be read about in more depth in his book, Icons of Evolution). Chapter two continues to arrange the stage for the masterful performance by providing a brief introduction to the science and history of genetics and then introducing its star performer, Junk DNA: the newest “Icon of Evolution”

In the second section, Wells confronts the unscientific myth that is often presented by evolutionists trying to claim that an intelligent designer would not have inserted “junk” into the genome. It is in this section where Wells provides the reader with information about genetics and the scientific findings surrounding Junk DNA. He often begins these chapters with an introductory genetics lesson that helps bring the lay reader up to a higher level of understanding, now better equipped to receive the information that is presented. Then, after the reader is able to comprehend the information, he presents one piece of evidence after another and shows Junk DNA to be a flawed hypothesis.

Wells argues for the functionality of Junk DNA two ways; inferred functionality and direct evidence of functionality. Functionality of the Junk DNA can be inferred from the conservation and transcription of Junk DNA. If Junk DNA really was junk, there would be no reason for it to be transcribed in the amounts that it is, and thus waste massive amounts of energy in the process. In addition to this, if this DNA was truly junk, one would expect its sequence to differ greatly from species to species and from order to order for natural selection would have no reason to conserve this sequence during DNA replication and this sequence would be filled with random mutations. This, however, is not the case. In fact many of the sequences are highly conserved.  Since Junk DNA is not only transcribed (more than protein-coding DNA) but is also highly conserved, even evolutionists infer from this that it is functional.

The second way in which Wells argues for the functionality of Junk DNA is through the direct evidence of current scientific findings. Wells presents a truly remarkable list of the evidence for the functionality of Junk DNA which includes the regulation of specific genes, the inactivation of the second X chromosome in females, structural importance, the ability to code for several proteins in a single RNA transcript and many more. Through the scientific evidence, Wells shows that evolutionist quips are based more on scientific ignorance and naturalistic biases than the scientific evidence.

In the last chapter of the second section, Wells shows the presuppositions and zealous commitment that some Darwinists have for evolution and Junk DNA. It is for these reasons that no one hears about the science that disproves it and those who know better continue to hold it up as proof when, just like all the other “Icons of Evolution,” it is a myth.

Wells begins the final section of The Myth of Junk DNA with an impressive summary of the second section. It presents chapters three through eight in easy to read segments that are well worth reading. In fact, if someone were to have trouble with the material presented in any chapter due to its occasional technical language or were to lose their way in the amount if information that is presented, it would be of benefit for them to read its summary presented here. In his conclusion, Wells wraps up his argument by showing that ID holds true to the scientific data and can be seen as an inference to the best explanation.  It is the evolutionists who continue to speculate past what the data can prove.  Wells shows a great example of this in the appendix: “The Vitamin C Pseudogene.”

The Myth of Junk DNA is a great book for those who want to understand more about the evolution/ID controversy. It is clear that Wells does not want his readers to simply absorb factoids and data that they can repeat without understanding. Instead, he desires that they learn and engage the material. This is obvious in that it is not uncommon for him to begin a chapter with an introductory lesson in an area of genetics that prepares them for the rest of the chapter. Wells goes one step further and informs the reader of a government kept database of journal articles that the general public can access at no cost. The reader, if they are so inclined, can read for themselves the most recent data concerning this subject and continue to grow in knowledge and understanding. However, there are a few sections in the book where Wells gives evidence for the functionality of Junk DNA but does not comment on the significance of that functionality. The necessity of some of these, such as certain regulatory pathways, may be evident to some who have taken several genetics classes, but will more likely than not be missed by the average reader.

Throughout this book Wells shows another “icon of evolution” for what it is, an unscientific myth. The scientific data continues to show that Junk DNA is not junk, but is functionally necessary, and that those who oppose it due so either by ignorance or malice. If they were to have even a crumb of intellectual integrity, they could only present a “Darwin of the Gaps.”  Showing their lack of this virtue, they continue to place whatever information the scientific community produces onto the Procrustean bed that is evolution.