The Myth of Religious Violence: Secular Ideology and the Roots of Modern Conflict 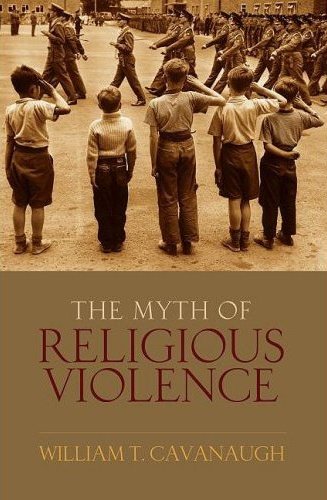 “Religion kills.” So asserts author Christopher Hitchens in his angry tirade God Is Not Great: How Religion Poisons Everything (p. 15). Hitchens, Sam Harris, and other “New Atheists,” contend that religious beliefs, practices, and institutions inevitably bend toward violence. Thus, religion should be eradicated from the earth for the sake of human progress and evolution.

Many have challenged the New Atheists on three grounds: 1) only extremist or apocalyptic forms of religion produce violence, 2) Christianity and other religions have done much good for humanity, and 3) religion gone wrong is not the only perpetrator of violence in history. Building on this third idea and giving it a new and robust philosophical framework, William Cavanaugh’s latest work The Myth of Religious Violence, offers the most forceful response to Hitchen’s argument yet.

Cavanaugh is a Professor of Theology at DePaul University in Chicago. Standing firmly in the Roman Catholic tradition, Cavanaugh’s previous works have focused on political theology, economic ethics, and ecclesiology. In this newest book, Cavanaugh exposes how this dangerous myth—that religion kills—has been created and propagated and is ultimately hollow. He contends: “there is no transhistorical and transcultural essence of religion and that essentialist attempts to separate religious violence from secular violence are incoherent . . . [This] myth of religious violence helps to construct and marginalize a religious Other, prone to fanaticism, to contrast with the rational, peace-making secular subject” (pp. 3-4). Let’s explore what he means.

For starters, Cavanaugh raises questions about the very definition of religion. Defining religion is a notoriously difficult task; some choose not to, others do it poorly. Indeed, he notes that Christopher Hitchens chooses not to define religion at all in a book about religion. As a result, Hitchens is able to pick and choose what accounts for religion (and is worth condemning) and what does not. Sam Harris, in his work The End of Faith, refuses to define religion as well. Like Hitchens, he targets the common world religions of Christianity, Islam, Hinduism, Buddhism, and Jainism. Cavanaugh points out that Harris mentions Stalinism and Maoism as “political religions” that are irrational and deserving of condemnation as well. But he notes: “[Harris] does not consider the possibility that Western political religions, such as American civil religion, might qualify as religion, for that would confound his neat dichotomy between liberal reason and religious irrationality” (p. 212).

Others have attempted to define religion according to belief in God or a divine being. Yet, this definition eliminates systems of beliefs and practices such as Confucianism, Shinto, Taoism, Buddhism, and Jainism, which do not include belief in any kind of gods as Westerners define them. However, virtually every religious scholar includes these ideologies or philosophies in his or her study of religion. And what about free market capitalism, a mode of thought that often relies on the “invisible hand” of the market and the “abstract forces” of supply and demand? Or even nationalism and civil religion, which deify abstract and unverifiable concepts like liberty and freedom?

Perhaps these difficulties with defining religion are why religious scholar Charles Kimball skirts the issue by suggesting, “religion is a central feature of human life. We all see many indications of it every day, and we all know it when we see it” (When Religion Becomes Evil, p. 15). But Cavanaugh retorts, “Well, no, we don’t. A survey of religious studies literature finds totems, witchcraft, the rights of man, Marxism, liberalism, Japanese tea ceremonies, nationalism, sports, free market ideology, and a host of other institutions and practices treated under the rubric of religion” (p. 22). Virtually none of the “religion kills” proponents define religion broadly enough to include these other ideologies, yet scholars recognize them as such because they all function as religions in our culture. And if they function as religions in their ability to stir passions, evoke commitment, unify groups of people, deify abstract concepts, and legitimate beliefs and actions, then why are these other ideologies not considered “religious,” especially when they lead to violence?

Cavanaugh contends that separating “secular” from “religious” ideologies allows secular ones, such as nationalism, free market capitalism, and American civil religion, to be seen as rational, valueless, and superior over against traditional religion and its irrational and violent tendencies. Consequently, this “myth of religious violence” marginalizes religious groups and reinforces adherence to a strictly secular order and the nation state that guarantees it. The myth also silences the legitimate critiques that non-Westerners (such as Arab Muslims) have about the West by attributing their opposition to irrational religious beliefs. And the myth even justifies “secular” violence as rational against religious actors (pp. 225-6). Targeted peoples must convert to religion of liberal democracy or suffer the consequences of American smart bombs.

Cavanaugh’s argument is grounded in the thesis of Wilfred Cantwell Smith’s landmark 1962 book, The Meaning and End of Religion. In it, Smith concluded that “religion as a discrete category of human activity separable from culture, politics, and other areas of life is an invention of the modern West” (p. 61). Only since the resolution of Europe’s Wars of Religion in the seventeenth century and Enlightenment thinking in the eighteenth have Westerners made this distinction. Cavanaugh explains that this is why we still have trouble understanding most Native American and indigenous tribal religions that are pre-modern in their constructions and make no distinction between religion and the rest of life. The same is true of many Muslim societies or the Christendom of the Crusades that draw no distinction between religion and politics.

Cavanaugh asserts that there is no such meta-category or genus called “religion” that spans history and cultures and of which Christianity, Islam, and Navajo religion are specific species. Struggles to define religion bear this out. Moreover, the concept of “religion” is a modern invention—no one before the seventeenth century thought of it in the way Westerners do today. That’s not to say that the invention of a term or category might not be useful for scholarly or taxonomical purposes. But cultivating a transhistorical and transcultural concept of religion that can be isolated from “secular” ideologies, imbued with violent tendencies, then condemned, is irresponsible. This practice merely serves the purposes of those creating the concept. And ultimately, Cavanaugh believes, it absolves from blame those who continue to propagate the category.

In my opinion, Cavanaugh’s argument is the strongest rejoinder to Hitchens, Harris, and others who condemn traditional religion as inherently violent. While his argument builds on others that have been made in the past—that most religion does not kill while many secular ideologies do—Cavanaugh exposes a major flaw or blind spot in the discussion as a whole. “In constructing artificial distinctions between religious and secular violence,” he writes, “types of violence and exclusion labeled secular have escaped full moral scrutiny” (p. 230).

There are few weaknesses in The Myth of Religious Violence. It’s possible that Cavanaugh’s assertion of the secular/sacred divide as a modern notion is slightly overstated. One might find hints of this distinction earlier than the seventeenth century, even among Christian theologians such as Augustine (in The City of God) and Luther’s understanding of two kingdoms. In addition, Cavanaugh dispels the myth of religious violence quite resoundingly but hesitates to construct an optimistic way forward for responding to violence—”religious” or “secular.” Yet, this was never his intended scope.

It is time to see the religious and even apocalyptic functions of secular ideologies. They often spawn eschatologies as destructive as any “religious” group. Might we speak about the secular instigators of the French Revolution and its Reign of Terror to usher in a new world order in the same way we talk of the millennialists of Munster or religious terrorists today? What about nationalists who prophesy a “Clash of Civilizations and the Remaking of the World Order” (Samuel Huntington)? Or neoconservatives who champion “The End of History” (Francis Fukuyama)? These eschatological narratives largely shaped the Bush administration’s War on Terror. Justified or not, when violence is done in the name of these ideologies over and against their respective enemies, it is no less morally culpable and no less religious. Perhaps religion does kill, not religion as it is traditionally considered, but religion—born of original sin and longing for ultimate, but often misplaced, redemption—as an inherent trait of all humans.