The Nature Miracles of Jesus: Problems, Perspectives, and Prospects 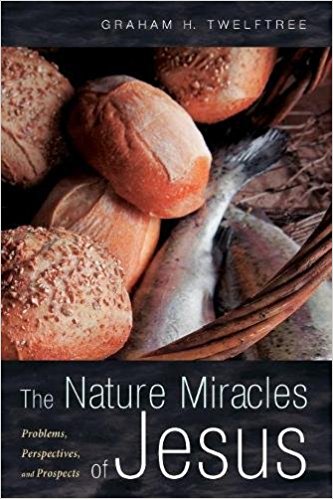 Entire books just on the nature miracles of Jesus are extremely rare.  This is the one category of miracle that just about all scholars outside of evangelicalism assume were invented by the early church.  When I saw a book, then, edited by Graham Twelftree, perhaps the premier New Testament scholar of the past generation on the miracles of Jesus and the early church from any theological perspective (and it is a bonus that he is evangelical), I bought it in a heartbeat.  The anthology did not at all disappoint me.

Twelftree, an Australian who taught for many years at Regent University in Virginia but who now is dean of the London School of Theology, has assembled an all-star cast of contributors from across the ideological spectrum.  After his own opening chapter sketching the major contours in the history of the interpretation of this portion of Jesus’ miracles, Craig Keener offers what is the most impressive chapter in the volume.  As he has done in his major two-volume work on miracles and in several subsequent journal articles, Keener offers a representative collection of examples (including some new ones) of well-documented and very credible contemporary parallels to the major categories of the nature miracles in the Gospels:  instantaneous, helpful changes in the weather after public Christian prayer or prophecy, multiplication of food, extraordinary fish catches, water turning into wine, and walking on water.  Other miracles could only happen after certain modern inventions—a life-saving journey in a car filled only with water after it had run out of gas to make it safely to the next village in the central African bush, for example.  Keener recognizes that such events do not necessarily prove either the existence of God or that God, if he exists, was the agent of the miracle, but for those who do not a priori exclude theism, it makes that belief system highly probable.

Eric Eve follows Keener by proposing a historical core of information as the foundational layer for most of the nature miracles.  But the nature of the informal, controlled oral tradition that Kenneth Bailey and James Dunn have championed, along with the dynamics of social memory, much studied in recent New Testament scholarship both suggest that some substantive changes would have been introduced into the tradition that the Gospel writers inherited.  So, too, do the redactional distinctives of each of those writers, and numerous Old Testament parallels may come from either stage.

James Crossley next defends the view that the nature miracles are pure myth.  As an unbeliever, Crossley is clear that he is convinced that much that is narrated here simply could not have happened.  He further thinks the standard criteria of authenticity have met their demise and may no longer be used.  He therefore appeals for the conversation to shift from defending or rejecting the authenticity of the contents of the narratives themselves to discussing the circumstances and factors that produced belief in such extraordinary events.

Ruben Zimmerman prefers to shift the conversation to what he calls a literary-hermeneutical approach.  He disputes that either form or content make the accounts of nature miracles any separate genre from the other Gospel miracles, that is, the healings and exorcisms (which are more often accepted as authentic even in fairly critical scholarship).  He is interested in the way the recounting of these narratives inspires both fear and hope in God, often in desperate situations.  He shows how these accounts are hermeneutically, theologically, and literarily “productive” as they actually alter the landscape in each of these spheres of inquiry in terms of what is believed to be possible and true about God in Christ.  Stressing how all history is interpreted story-telling, Zimmerman follows Eve’s lead in seeking a via media between taking the nature miracles as primarily either myth or fact.

Michael Levine introduces the first of two philosophers’ perspectives in this anthology.  He spends most of his time discussing the issue of miracles as the violation of the laws of nature with a brief excursus on the alternative that sees them as actual instances of the laws of nature in ways we don’t yet understand.  Both approaches concede too much to the idea of a closed universe of cause and effect.  Even without God, both necessarily entail the exclusion of free human agency, which the skeptic is even more likely to insist on than the believer.  But if one allows for even the possibility of God, then as the consummately free agency in the universe he can perform what we call miracles without either violating the laws of nature or using unknown laws of nature to accomplish them.

Tim McGrew focuses on the resurrection of Humean arguments in New Testament scholarship in an age when most philosophers have recognized their illegitimacy.  He rehearses the major fallacies in each of them and reminds us that Hume’s critics in the eighteenth and nineteenth century already highlighted these flaws.  More interdisciplinary work is needed so that scholars in one discipline will come to recognize the contributions of the other.  But McGrew also finds Keener’s approach part of a growing body of literature that has documented miracles even in the Western world, even under the scrutiny of hospital doctors.  Ironically, it may turn out that we can accept Hume’s stricture that we must have analogies in our own experience of reported events to be able to accept them because of the mounting contemporary evidence that miracles like those in the Gospels still happen.

Scot McKnight, finally, applies the approach he has taken the historical Jesus quest more generally to the debate over the authenticity of the nature miracles.  Faith cannot depend on the ebb and flow of critical scholarship but rests on the divine Scriptures and the church’s Great Tradition of orthodox Christology.  Historical evidences can never lead us all the way to everything Scripture affirms about who Jesus was.  The significance of Jesus for the church and world today comes through close and careful biblical exegesis rather than arguments for the plausibility or implausibility of various portions of the Gospel traditions, including the nature miracles.

A particularly helpful feature of this volume is the next chapter in which each contributor gets to interact briefly with as many of the other writers and their emphases as he chooses.  Twelftree finally summarizes what he believes the collection of essays has accomplished and prospects for future research.

It should come as no surprise, in light of my own writings, that I find Keener’s and McGrew’s contributions the most valuable of the collection.  I have personally witnessed inexplicable healings and have had analogies to nature miracles described to me by close friends and family members in contexts that make them virtually impossible to doubt.  Crossley takes me to task for exaggerating Keener’s highlighting of Hume’s racism in my review of Keener’s larger work in this same journal, when Keener pointed out how Hume dismissed all the accounts of miracles in his day that were coming from African and Asian contexts because he “knew” the witnesses there just weren’t sufficiently credible.  It is an odd criticism since I only mention the issue briefly in a wide-ranging review, but it allows Crossley to sidestep the question of the large body of twentieth and twenty-first century parallels, for which he apparently has no explanation.  Several of the contributors, and especially Zimmerman, in turn take Crossley to task for calling the nature miracles pure myth as if that were the only logical alternative to pure fact.  Most of the contributors find McKnight’s approach too extreme, as if one could successfully separate altogether the results of historical Jesus research from what the church chooses to continue or not continue to believe.

If there is anything missing in this volume, it is the close biblical exegesis that McKnight rightly calls for.  When one sees, as I pointed out over thirty years ago, how similar the contents of the nature miracles are to imagery in some of the most authenticated miracles of Jesus (and, despite both Crossley and McKnight, rumors of the demise of the criteria of authenticity in toto are remarkably premature), this gives them added credibility.  When one sees how the entire corpus of Jesus’ miracles is consistently tied to the theme of the inbreaking kingdom of God, this sets them off dramatically from anything that smacks of myth.  But perhaps the contributors thought that these points had been made adequately elsewhere.  In any event, the collection of essays is a monumental contribution to the sparsely populated field of studies of nature miracles, representing a high quality of scholarship and a fascinating diversity of perspectives.  Even if one has read next to nothing in this area, this book alone will make them abreast of almost all of the salient issues.