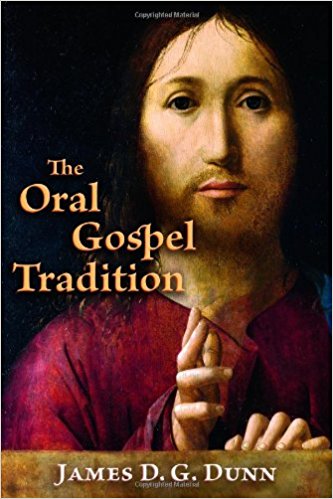 James Dunn’s caliber of work over many decades warrants a project of this type: a collection of his previously published essays, chapters, or articles that have focused on the oral traditions behind the canonical Gospels. That is, in my view his work has proved so instrumental to our understanding of the Gospels’ origins, that Eerdmans is to be lauded for agreeing to put fifteen of them together into this one volume. Professor Dunn is Emeritus Lightfoot Professor of Divinity in the Department of Theology at the University of Durham.

In the short introduction to the chapters that follow, Dr. Dunn traces something of his journey through his study of the Gospels while set within the larger framework of his scholarly pursuits, including his enormous contributions to Pauline scholarship and “the new perspective on Paul,” a label he coined. He avers that throughout his career he has been intrigued by the sameness and differentness of the gospels, and his forays into their oral backgrounds has been for him the best way to account for the data. The essays are mostly very technical in nature, and only readers conversant with the intricate discussions of Gospel origins will be able to follow all his arguments. One encounters such issues as: prophetic “I”-sayings; Q; Markan redaction; Wirkungsgeschichte; oral gospel; social memory; etc. Some of the debates are very arcane and will appear to some to amount to internecine squabbles. But Dunn’s essays are carefully reasoned and meticulously defended from the texts of the Gospels as well as what can reasonably be gleaned from the early evidences in the oral culture of first century Palestine. As readers will discover in his trilogy entitled “Christianity in the Making” (Eerdmans, 2003 – 2015), he has made a formidable case for the reliability of the Gospel traditions and what we can know about the historical Jesus and the first 120 years of the Christian faith.

In these essays published between the years 1977 – 2011, Dunn has sought to defend the essential oral nature of the traditions behind the Gospels in the face of various objections. Some question that Jewish or Galilean societies during Jesus’ time were oral in nature. Others question whether one needs to posit oral traditions behind the written Gospels. Some have doubted whether oral tradition can be by definition dependable, arguing that only literary explanations can be historically valid. Others question whether one can reliably penetrate back into the oral phase of the Jesus traditions. There are other objections to be addressed as well. In this collection of essays, he shows how he has responded to various criticism of his approaches. Here, in summary, are his main contentions in this mixture of essays:

The essays are divided into three parts. In the first part (7 essays) he seeks to alter the “default setting” (which embraces a literary mindset to understanding the origin of the Gospels) to an oral explanation, and to re-envision how the early Jesus’ traditions were transmitted. They are mostly related to his subsequent book, Jesus Remembered (Eerdmans, 2003). The second part (4 essays) consists of responses to the varied criticisms of that book. The 4 essays in the third part step back from the close textual arguments of the earlier essays. In these chapters he seeks to set the thesis about the oral Gospel tradition into the wider contexts of the historical Jesus; to envision the actual transition from Jesus to the Gospels; to take the broader look at the traditions that go into the New Testament; and to pursue the implications of the character of the Jesus tradition as a living tradition–extending from Jesus himself to the present, a tradition that is still living (his emphasis).

To conclude I want to emphasize a point he makes in his final chapter. His argues that we must view Scripture as a living tradition, not merely a static ancient text that requires our interpretation (which is forever problematic as interpretations differ or may even be seen as hopeless in a post-modern world). But if Scripture is living then it can function as the word of God here and now. He says, “So long as scripture evokes a faith response … and so long as faith reads/hears scripture with relevance and profit, it will retain its character as living tradition” (p. 378). Readers of these essays will profit, I think, from seeing how Dunn moves from the initial faith responses of Jesus’ initial followers to his conclusion that we too must engage those traditions for Scripture to be alive in our experiences as Jesus’ followers today.