The Practice of Prophetic Imagination: Preaching an Emancipating Word 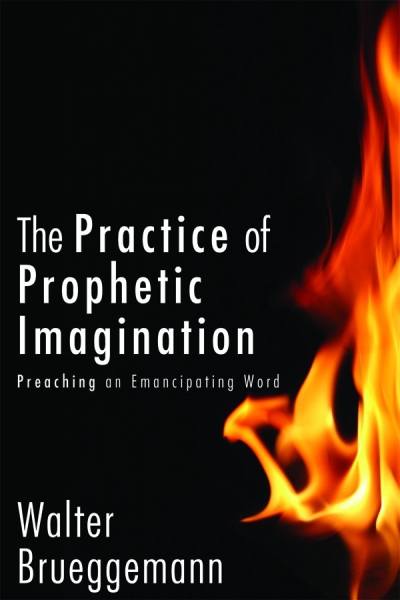 Since the 1970s Walter Brueggemann has written extensively on what he calls the “prophetic imagination.” This slim volume continues in that vein. Brueggemann always has been committed to local pastoral ministry, and the primary target audience of The Practice of Prophetic Imagination are leaders of congregations, who must give a powerful orienting message to those seeking a word from God in these discouraging times. The shape of this book confirms that intention. The author dedicates it to Gordon Cosby, the pastor of the Church of the Savior in the Washington, DC area who was renowned for his deep spirituality and as a pioneer in social outreach (Cosby passed away in March, 2013 after the publication of the book). John Buchanan, a recently retired pastor of historic Fourth Presbyterian Church in Chicago, provides the appreciative foreword.

The Practice of Prophetic Imagination is divided into six chapters. As is characteristic of Brueggemann’s other works, this book engages a variety of biblical texts and interacts with a wide spectrum of biblical scholarship, even as it is informed by other disciplines. The order of the chapters mirrors the flow of the author’s argument, from establishing the nature of the prophetic enterprise to the task of proclaiming a reality counter to the prevailing narrative, to the announcement of judgment and the loss it brings, through to the hope with which the prophetic books close.

Chapter one (“The Narrative Embedment of Prophetic Preaching”) lays the groundwork for what follows: the challenge of presenting an alternative narrative of life to the one propagated in our culture. Early on Brueggemann states clearly what is his topic: “prophetic proclamation is an attempt to imagine the world as though YHWH… were a real character and an effective agent in the world.” By “imagine” he means, “to utter, entertain, describe, and construe a world other than the one that is manifest in front of us, for that present world is readily and commonly taken without such agency or character for YHWH” (p. 2). The inadequate visions of God, which are commonly preached are incapable of assuming this task, are what he labels idolatry, irrelevant transcendence, and cozy immanence. The dominant narrative that must be confronted, Brueggemann believes, is that of military consumerism, which celebrates (again these are his terms): self-invention, self-sufficiency, competitive productivity, and American exceptionalism. How different than the substance and attitudes of the credos of Deut. 26:8-9 and 1 Cor. 15:1-3 and the historic confessions of the Christian faith (the Nicene and Apostles Creeds)! Each lifted up another perspective of the meaning of human existence to that of the prevailing accounts of its day. From what he calls his canonical, post-critical interpretative stance (which appeals to some extent to critical theories), Brueggemann pulls out certain themes of the Pentateuch (the Exodus, covenant, and creation), which are reworked in the New Testament. These form key material of the different perception of life that prophetic preaching must communicate.

The second chapter (“Prophetic Preaching as Sustained, Disciplined, Emancipated Imagination”) articulates again the concept of prophetic imagination that Brueggemann has elaborated elsewhere. It entails more than analyzing the present and unmasking its perverse worldview; it requires a powerful rhetoric that offers a different today and a new tomorrow. He sees a tension in the Old Testament between the monarchical vision of Jerusalem and its theology and the prophetic visions of reality and of YHWH. To counter that official royal consciousness, Brueggemann believes, the prophets lifted up familial metaphors for relationship with God, called for loyalty to YHWH and neighbor, and appealed to creation and covenant. Prophetic preaching today also requires presenting a different narrative opposed to our dominant ones and connecting personal angst to systemic issues, centered upon YHWH as a real agent in the world.

In chapter three (“Loss Imagined as Divine Judgment”) Brueggemann demonstrates that the poetry of the prophets also was the means by which they could express the pain of defeat and vulnerability that the reigning narrative does not countenance. The prophets saw the sacking of Jerusalem and Samaria as divine judgment, and these were “not random loss or meaningless loss or accidental loss” (p. 53, author’s emphasis). Choices and lifestyles, in other words, are meaningful in God’s economy, a covenantal fact that is expressed in various ways, such as the woe oracles and shocking imagery. Brueggemann endorses Klaus Koch’s view (also supported by Terence Fretheim and others) that there is an inherent connection between actions and consequences according to the moral order of creation, so that God’s intervention is not as direct as many assume. YHWH also will use human agents to perform judgments, and this secondary instrumentation can be messy. Another component in the complexity of judgment is the compassion or severity that God can exhibit in punishment in response to petition and repentance or continued obstinacy.

Chapter four (“A Lingering Place of Relinquishment”) builds off of the previous chapter discussion of judgment. The main point is that, even as God judges, this reality is laced with pathos and empathy. Therefore, Israel can probe the depths of lament at the loss of the Jerusalem and its king and temple. As Israel does so, it voices its grief and questions God, who also experienced loss in the defeat of his people. In response, Yahweh in compassion, with his own deep wrestling, resolves to restore Israel.

In the fifth chapter (“The Burst of Newness and Waiting”) Brueggemann says that after the exile the prophets appeal to the creation and the patriarchal traditions to trust that God can do the impossible; he can transform the fortunes of his people. Brueggemann emphasizes the movement toward hope within Jeremiah 32, Ezekiel 34 and 37, and Isaiah 40-55. He then turns to the birth, teaching, and ministry of Jesus to show that these, too, call us to believe in fresh possibilities, something new beyond our disaster and despair.

The final chapter (“The Continuing Mandate”) rehearses the main points of the book. Brueggemann returns to his earlier criticisms of our cultural context and of how the Christian church and its word have been compromised. Prophetic preaching rises to counter that destructive complicity and announce judgment and a hope to be built on another worldview. He says, “The prophetic tradition persistently reperforms both impossibilities of dismantling and restoration; and the totalizing ideology can host neither the impossibility of dismantling nor the impossibility of restoration” (p. 132, author’s emphasis). Modern-day prophets need to enable people, first, to let go of the social construct that so many assume is correct and invincible; second, to embrace the subversive truth that God presents an alternative world. To speak out and to articulate God’s truth is transformative and liberating; it is to proclaim that God reigns in spite of the lies of the hegemonic ideologies of our time.

This is a rather long summary of a relatively short book, and it cannot do justice to the many insights that Brueggmann offers in this appropriation of so many biblical passages. The Practice of Prophetic Preaching is a stimulating read, whose value lies in its reinforcement through this impressive catena of passages that humanity lies under the spell and in chains to worldviews that deny God or domesticate him and which lead to death. The articulation of this alternative vision has been Brueggemann’s vocation for several decades, and his writing, as always, is creative and captivating. This has been his genius.

As I think back over the trajectory of his works, I notice at least three features of the evolving expression of Brueggemann’s thesis. First, he has an amazing capacity to integrate Old Testament studies with research in other fields. We may never see such a master of interdisciplinary reflections again. Second, Brueggemann, though always opting for the canonical form of the biblical text, has also maintained a connection to critical studies and theological trends. Of course, these have changed over the decades, so his interlocutors have changed as well. In this volume, for instance, he engages recent discussions on the violence of God. This interface, as always, is very textual. Brueggemann always is wrestling with texts.

Brueggemann’s receptivity to new ideas leads to my third point. It is that his understanding of God has gotten more complex over time, and this is where some readers might feel uncomfortable with some sections. Not all will agree with his views on the historicity of biblical accounts (pp. 14-15), or that judgments are connected to creational realities beyond God’s control in some way (chpt. 4). For instance, there has been some good work done recently to substantiate the historicity of events, although this usually is done outside of critical circles. One also can hold that sin has consequences according to the natural order of things without relinquishing so much of divine sovereignty. I very much applaud, too, the emphasis on God’s pathos and on his responsiveness to humanity, but question whether one is forced to move as far in the direction of God’s evolving self that this book does. Interestingly, in other matters Brueggemann continues to hold to a polarization of biblical theologies that I believe oversimplify and misrepresent the biblical revelation (such as his negative evaluation of the Davidic promise and the hopes for Zion as too wrapped up in an abusive monarchical ideology, which he then connects to modern equivalents). Brueggamann’s theology is complex, rich, and challenging.

Even with these caveats I recommend this book. Its textual foundations and its stimulating discussions of deep grapplings with God in the stuff of life are worth the read. Whatever one might think of some of his individual convictions, Brueggemanns’s lifetime of sounding the unrelenting call to embrace the true God revealed in the Scripture and to reject the reality into which we have been socialized deserves attention and gratitude.