The Road Trip that Changed the World: The Unlikely Theory that will Change How You View Culture, the Church, and, Most Importantly, Yourself 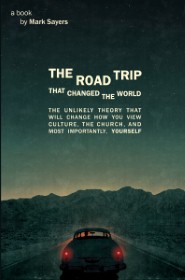 As Christians necessarily living in this world, we must approach our culture sensitively and proactively. We should care to have effective lives through our conversations and relationships with non-believers, as an outpouring of our love for God and our neighbors. Any Christian desiring to fulfill this call should take a peak between the average-looking covers of this book to discover the unique thoughts of a contemporary cultural prophet. In The Road Trip that Changed the World, Mark Sayers adds perspective to our assessment of society and wisdom and to our apologetic engagement with people soaked in today’s dominant worldview. He uses stories and familiar symbols to contrast popular cultural beliefs and the Christian worldview in a fluid but profound read.

Sayers begins by exploring some history in order to interpret the present times, explaining how specific authors, philosophers, and artists have influenced the underlying cultural. Medieval Christianity used to be full of meaning; every decision or circumstance held spiritual weight. Then religious wars and bloodshed over belief separated religion from public life and pushed secularism to the forefront of Western thought. Secularism succeeded in delivering comfort and efficiency, yet ultimately was “soulless” (73). The world which accepted significance beyond the tangible had disappeared. Living within this immanent paradigm is a costly choice for the individual, and not many are actually willing to live it consistently. If reality is only what we can touch and see, then the love of family is only chemical reactions, murder is only an exertion of power, and according to Nietzche, “God is dead.”

Jack Kerouac, his book On the Road, and the Beatniks entered into this scene. They wanted to live in secularism’s abandoned pursuit of pleasure while still seeking transcendence and spiritual meaning. These desires led them to the road, where the journey itself seemingly offered meaning but allowed for hedonism along the way. The road went nowhere; the goal was simply to keep moving. Philosophers Dreyfus and Kelly use the term “woosh moments,” experiences of transcendence that are not linked to any continuous narrative, to describe the pursuits of a person embracing this era (110). Sayers compares this chase to an addiction, in which a person never actually reaches satisfaction. One hit leads to a desire for more, and each time the power must be even greater for the addict to feel the effects. Jack Kerouac and his book are a representation of the restlessness, individuality, desire for freedom, and search for transcendence we see in our society.

While he does not clearly describe his apologetic method, Sayers does demonstrate it in the progression of his writing. First, speaking to a population that lacks absolute morals and rootedness, he uses stories to exhibit why readers should be concerned about society’s deepest beliefs. He compares Sayyid Qutb’s analysis of American culture to Kerouac’s. Though they had different reactions to the “mass consumer culture,” they both noticed the same crack—shallowness, lack of meaning and obsession with “fun” (25). Spurred on by his observations, Qutb published a book that would later guide Al Qaeda leaders Ayman al-Zawahiri and Osama bin Laden in carrying out their infamous actions. An American reading this story cannot help but realize the necessity of critiquing our culture.

Sayers’ apologetic skill lies in intricately weaving a dance between Biblical truth, stories, pop culture, and modern philosophy. He does this in such a way that the Christian narrative is relevant and understandable, yet concretely different. As he uses insight to penetrate the culture, he draws out contrasting parallels, such as Kerouac, Abraham, and the icon of the road. Both Abraham and Kerouac walked countercultural and spiritual roads. Abraham’s journey, however, was one of faithful commitment to God and a specific purpose that God would later reveal. Kerouac’s adventure involved throwing off all constraints and rejecting the true pursuit of God. Abraham’s road, as a symbol of a believer’s role, was one to become a Shomer, cultivating and creating within the world. Kerouac’s lifestyle was one of consumption.

Sayers’ comparison between Babel, celebrity culture, and Nietzsche is another significant example of his cultural analysis interacting with Biblical truth. Though they were supposed to depend on God’s strength, the people of Babel reacted out of fear of death, tried to grasp autonomy, and attempted to control their own lives. In the same way modern celebrities try to “conquer mortality by being known by the masses” (196). The spirit behind Nietzsche’s philosophy is similar in that he encouraged people to become mini-gods, shaping their own lives in a world full of opportunities in order to dominate by power. Babel’s destruction and consequent scattering should be ample warning for these tendencies in our own culture.

Overall, this writing helps bring sense to the chaos of our mainstream culture. People of the road, unattached and isolated, might find an appealing contrast in Sayers’ depiction of God’s narrative. God’s work is continuous, contextual, and relevant throughout millennia. God’s story involves a covenant, a choice to enter into a lifestyle of countercultural commitment. Kerouac’s followers may escape into moments of transcendence, but must return to the miserable, mundane reality of everyday life. The Christian God uses every ordinary day to teach and transform us. He offers a life of meaning and significance lived out in responsibility and covenantal love. It is this truth we wish to share with the world, and Sayers’ work may help us along on our own road of calling and surrender.