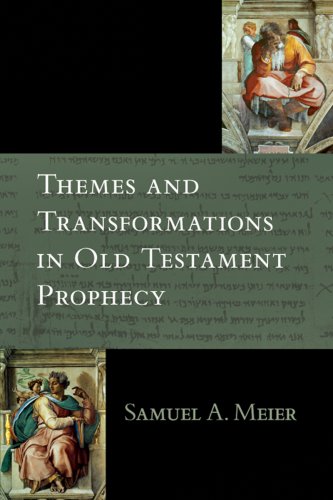 The thesis of Themes and Transformations in Old Testament Prophecy is that there was a substantive change in Israelite prophecy in the sixth century. The fall of Jerusalem, the destruction of the Temple, the demise of the monarchy, and the exile to Babylon marked the decisive moment. These events were the catalysts for the reconfiguration of the prophetic identity, mission, and message and for the decline in the prophecy and the subsequent rise of apocalyptic. Meier does not argue, however, that there was no continuity between earlier prophets and those of the exilic and postexilic period. Those elements, however, are not the focus of his study and occupy only one of his chapters.

After the Introduction in which Meier lays out the gist of his theory of the historical trajectory of prophecy, he dedicates separate chapters to a series of features of prophetic claims and ministry in which he claims to be able to discover points of transformation. These are the presence of the prophet in the divine council, the possibility of the reversal of a message, the mode of the revelation from God, the role of angels in the revelatory process, the presence of divine speech in the prophetic books, the shift from a preponderance of poetry to prose, the change of prophesy as an oral phenomenon to a literary one, an increased historical awareness and concern for dating with Judah’s defeat by Babylon and the exile, the association of prophets with miracles, the relationship between prophets and the king, the censure of a misplaced confidence in military might, and the repetition of oracles in later material.

His chapter on what remains constant throughout the long history of prophecy lists the characteristics that authenticate true prophets as opposed to a false or misled ones. He posits four: the refusal to tailor their message for remuneration or personal gain, the call to deliver usually messages of judgment instead of words to please their countrymen, their status as spokespersons for a minority and contrarian position, and their ability to correctly predict the future. Themes and Transformations in Old Testament Prophecy closes with a bibliography of cited works and indices of authors and biblical and ancient texts.

There is much to commend this volume. Meier writes well and communicates his ideas clearly. Chapters are replete with textual examples, and the footnotes are good sources for more passages and clarifications of key points. The breadth of the author’s treatment of prophecy gives his proposal greater credence, and it is very clear that Meier is well versed in the pertinent scholarly research. It is impossible to comment on each of the elements that is discussed. I mention four that I found personally informative, and then I will mention two areas where I disagree with Maier’s treatment.

It is intriguing to notice that prophetic access to the divine council disappears with the exile (ch. 2) and that the mode of revelation shifts from a more intimate “seeing” granted by God to an admission of less direct contact (e.g., Zech. 1:4-6) and to include more interaction with (in the form of explanations by) angels (chs. 4-6). A second helpful discussion concerns the contingency of the future that is communicated in prophetic messages (ch. 3). This concerns what recent theological debates have labeled the “openness” of God. Meier mentions the occurrences of the term “perhaps” (cf. Amos 5:15; Zeph. 2:3; Jer. 26:2-3; 36:1-3, 7; Ezek. 12:1-3) and other textual data to demonstrate that God is willing to change his mind, something that does not seem to be communicated in the post-exilic material.

A third feature is chapter 13, “The Chariots of Men and of God.” This is one of the longer discussions in the book. Meier explains the status of chariots as proof of military might in the ancient Near East, and several kings—beginning with David—succumbed to the temptation to try to live up to this cultural power marker. The prophets mock the reliance on chariots and stress that Yahweh is Israel’s strength as “Yahweh of hosts.” There are occasions, too, when the prophets became, in a sense, the chariots and protectors of the nation (e.g., 2 Kgs. 6:8-17). The author acknowledges that in our postmodern age the idea of violence associated with God is unpalatable; yet, there is a battle between good and evil, and God must vindicate his people. This forthright dealing with this theme is refreshing in these days, when so many downplay, belittle, or deny these more uncomfortable passages. A fourth element is the listing of the criteria for distinguishing true from false prophets (ch. 15). This is the chapter mentioned earlier that lists the four characteristics that persist throughout the Old Testament. What is important is the admission that these are not always so neat or decisive and that this discernment involves more than the fulfillment of predictions (a common view).

There are at least two points at which Meier’s argument is less than convincing. The first is in chapter 7, in which he claims that the pre-exilic prophets rarely used phrases linked to divine speech—specifically “declares Yahweh”, “said Yahweh”, “thus said Yahweh”, and “the word of Yahweh came to PN, saying.” Here the author ignores the Book of Amos, which is replete with divine speech and repeatedly utilizes some of the phrases he lists. Nowhere is Amos mentioned in the chapter, and it does not appear in the chart of the pre-exilic Minor Prophets on p. 71. This omission appears deliberate; the evidence is inconvenient. Meier throughout his volume makes statements to the effect that there are exceptions to his view and that categories cannot be neat and tidy; this lapse, though, is more weighty.

A second point of disagreement is with his discussion on the writing down of the prophetic messages (ch. 9). In this, he takes the common point of view that for the prophets of the Deuteronomistic History and the pre-exilic writing prophets prophecy was more of an oral phenomenon, whereas with Jeremiah there arises for the first time the sense of the need to record the messages in light of the coming destruction and deportation. Earlier references (e.g., Isa. 8:1-2; 30:8; Hab. 2:2-3), he says, were more about recording words to check their later confirmation. There is some truth in all of this, but it does ignore the evidence that in Mesopotamia many prophecies were written down soon after their proclamation because of their importance for the king and national policy decisions. Nowhere is this material dealt with, and the result is a bit of a skewed picture of prophecy (especially before the exile) as almost exclusively oral. I would argue that written prophecy appears earlier, something attested—I believe—by historical referents and their literariness. These books are not simply collections of oracles; they may have been from the beginning artistic creations.

All in all, Themes and Transformations in Old Testament Prophecy is a very useful volume. It has much to offer students of the prophets, and, with the exception of a few caveats, I highly recommend Meier’s work.