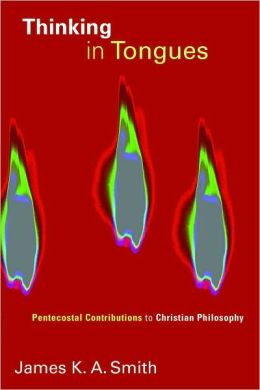 In Thinking in Tongues, James K. A. Smith invites Pentecostals (not just those of the classical Pentecostal denominations, but all who are radically open to the Holy Spirit) to develop their own way of doing philosophy, an invitation in the vein of Alvin Plantinga’s “Advice to Christian Philosophers.”  Chapter one is a challenge for Pentecostals to not simply do philosophy or write philosophy for Pentecostals; rather, philosophy as a whole can benefit from a uniquely Pentecostal style or school of philosophy informed by the Pentecostal worldview and experience.  Pentecostal philosophers ought to pursue this project as an attempt to live integrated lives, where their worldviews and beliefs are part of their academic professions and confessions (15).  Smith, then, calls Pentecostal philosophers to a “Holy Ghost boldness” in pursuit of this program, for “we are destroying speculations and every lofty thing raised up against the knowledge of God, and we are taking every thought captive to the obedience of Christ” (15-16; see 2 Cor. 10:5).

Chapter two begins to articulate the scope and nature of the Pentecostal worldview, by which he means “our ‘take’ on things” which “has something unique, powerful and viable to say to the academy” (25).  This worldview is at the center of what it means for Pentecostals to be human in the world.  It covers all experiences, informs thought and emotion, and identifies individual calling (28).  He follows Heidegger’s and Taylor’s distinction between knowledge and experience and adapts Taylor’s concept of “social imaginary,” whereby Pentecostalism is a background and non-cognitive understanding of what it means to be in the world (29).  This worldview is constituted by the following elements: a radical openness to God; an “enchanted” theology of creation and culture; a nondualistic affirmation of embodiment and materiality; an affective, narrative epistemology; and an eschatological orientation to mission and justice (33-46).

In chapter three, Smith identifies the epistemology implicit in Pentecostal spirituality, one that is supported by, or is a precursor to, a kind of postmodern theory of knowledge.  Narrative serves the primary role in making Pentecostalism a kind of countermodernity (50).  Pentecostals tell stories; moreover, Smith argues, Pentecostals know the more profound things that they know in and by stories.  The primacy of narrative is argued on the basis of narrative’s unique ability to make sense of one’s affective life, experiences which cannot be reduced to propositions (65).  Furthermore, narratives seem to be elemental to humanity’s evolutionary biology; humans are story-tellers (66).  This chapter critiques rationalistic theories of knowledge, explains how Pentecostal spirituality commits Pentecostals to a narrative epistemology, and offers a program for aesthetics.

Chapter four explains a potential contribution to ontology, particularly that “embedded in Pentecostal practice is a worldview—or better, a social imaginary—whose ontology is one of radical openness and thus resistant to closed, immanentist systems of the sort that emerge from reductionistic metaphysical naturalism” (88).  Pentecostals have a particularly strong sense of the “elasticity of nature,” that is, a sense that God’s omnipresence entails a universe where physical and non-physical are inexorably intermingled.  Many evangelicals would adhere to interventionist supernaturalism, where the closed universe is sometimes broken into by God, though natural laws are the norm (97).  But Smith suggests that the universe is “enchanted,” a Spirit-filled reality.  The universe is full of God’s presence and grace, not a place where God has to contravene natural forces to enter in (98).

Chapter six presents a contribution to the philosophy of language, which Pentecostalism is positioned to inform with its unique practice of tongues-speaking.  He first claims that Pentecostalism challenges Husserl’s phenomenology because tongues-speaking is expressive speech, a kind of gesture which points to God, that does not function with known words (134).  Second, Pentecostalism challenges the notion of inherent interpretive bias because tongues are an unmediated delivery of divine agency (138).  Third, speech act theory may help illuminate what tongues-speech is as a linguistic phenomenon.  A prayer in tongues is less about content than it is about expressing desire for and dependence on God.  It is a speech act which does something rather than one which says something (144).  He concludes this excellent chapter by explaining how speaking in tongues may be informed by critical theory and neo-Marxism.  Speaking in tongues is a language which imagines a Spirit-filled and redeemed future now, and in this sense, it unites and motivates its largely two-thirds world practitioners into a community that resists oppression and economic determinism (148).

There is much to appreciate in this book, particularly Smith’s call to the program of a Pentecostal philosophy.  Pentecostals already have a philosophy of Christianity (of Pentecostalism, of life, etc.), and articulating this philosophy has the potential to enrich and critique competing outlooks on reality.  Smith asserts that “the key elements of pentecostal/charismatic spirituality represent the way to be authentically Christian” (32).  He means not to relativize Pentecostalism’s claim to truth in the marketplace of ideas, and this is laudable.  His affirmations that Pentecostals hold to strong views of embodiment (42) and supernaturalism (40) are important contributions to this discussion.  His call to a Pentecostal aesthetic is a refreshing contribution to the genre of technical philosophical writing (82-85).

Smith’s ontology—that God does not have to come in through the back door (or break down the door) to our closed world and its natural laws—is an important antithesis to the regnant bias toward methodological naturalism of which evangelicals can be guilty.  An omnipresent God is intimately involved in the sustaining of the universe and in special action therein (see Col. 1:17 and Heb. 1:3).  Our performative theology to the contrary, God is always at work.  God doesn’t require special circumstances in which to enter into “our” world.

Smith argues many troubling points in this book, however, trading on the weak capital of postmodern philosophy.  He rightly chides the failures of modernity (prideful certainty, scientific oblivion, faith in progress, and the violence of the 20th century), but he conflates the rationalism of modernity with classical epistemic rationalism and objective reason.  Classical epistemology identifies knowledge as some form of justified, true belief.  Propositions are truth-bearers in this form of knowing precisely because they make truth claims.  Truth is seen as correspondence of propositions to states of affairs in the universe.  These classical views of knowledge and truth are lumped into Smith’s account of “rationalism” and dismissed as products of the failed modernity project.  This is poisoning the well, for though modernity used and abused reason and classical epistemology, reason and classical epistemology developed before modernity and have been employed against modernity in important ways.

Smith’s remedy is a perspectivist account of knowledge.  He argues, “At the risk of falling into cliché, the postmodern critique of modernity found that what was often touted as ‘rational’ turned out to be what white European males thought was a good idea” (57).  This account of rationality, however, is only one perspective of things.  He accepts a postmodern account of truth, appealing to the philosophies of Derrida, Polanyi, and Foucault, among others.  Michel Foucault, for example, asserts that truth claims are invented attempts at exerting power over others; “truth” is a tool of manipulation.

Christians, however, see the Word of God as objectively true, rational, and pertinent for all peoples and at all times (Psa. 51:6; Jn. 1:1-2; 14:6; 18:36; Acts 17:30; Rom. 1:18-25; 2:14-15; 3:3-42 Tim. 3:16; Heb. 4:12).  Smith would agree that Christianity is true, but his epistemology cannot sustain his belief.  His epistemology entails the rejection of the Christian story as just one account of things.  Contra Smith, Christians need a more reliable account of truth and rationality to support the objective claims of faith.  Common sense reason and logic can be employed in this regard.  Indeed, the laws of identity, non-contradiction, and the excluded middle obtain for all people at all times and are necessary for any meaningful discourse.

Narrative becomes the central meaning-maker and truth-bearer in Smith’s postmodern epistemology.  Few could attempt to deny the powerful existential experience that stories can bring, but Smith claims that humans know in stories (64).  Smith tells Pentecostal stories, the “truth” of which cannot be denied.  But what about two stories that disagree?  If narratives are the primary ways of knowing, then there is no common ground from which to adjudicate between conflicting stories.  Thus, the bar for warrant or justification disappears.  The ancient problem of the criterion obtains in a world where the referees for knowledge are taken out of the game.  While the emotional experiences in response to stories are profound and may not be completely reducible to propositions, the content of God’s character and actions in any story are reducible to propositions.  The truth of what happened in history is reducible to propositions, though its subjective impact may not be reducible.  Propositions may miss the profundity of most narratives, yet they can accurately relay the truth or falsity of any narrative.

Furthermore, when one combines his view of narratives with his perspectivism, one must deny meta-narratives, which most postmodernists do.  However, Christianity is God’s meta-narrative.  Smith claims that our “micronarratives” may be placed within the “macronarrative” of the Bible (63).  But again, reason and tradition are required to referee how the Bible is rightly applied.  For example, I may tell a story where I “put out my fleece” and situate myself against the backdrop of Gideon in Judges 6, yet this narrativization of the Bible and my experience will either neglect or obfuscate the command, “Do not put the Lord your God to the test” (Deut. 6:16, NIV).  Or worse, what if one’s story contains a claim like, “I know that I know that I know that the Book of Mormon is true?”  What is needed is not a rejection of reason’s primary role in adjudicating truth, but a biblical hermeneutic, applied rationally and humbly, yet aiming at objectivity.  This does not require presuming objectivity.  This does not require rejecting the profundity of emotion in God’s work in individual lives, but it does require that Christians “guard the good deposit that was entrusted to [us]—guard it with the help of the Holy Spirit who lives in us” (2 Tim. 1:14, NIV).

Smith’s ontology is his strongest contribution, yet Smith grounds this view, as with all of the unique contributions in this book, in Pentecostal practice.  He claims, though, that Pentecostalism is “the way to be authentically Christian” (32).  Yet this claim only stands insofar as Pentecostalism is biblical.  Biblical authority alone provides a trans-cultural, universal, and eternal grounding for the beginnings of articulating an ontology.  Practice, on the other hand, changes over time and from place to place, thus possibly requiring a reconception of Smith’s ontology.  Further, his ontology may lead to a breakdown between matter and spirit.  If matter and the spiritual are intertwined in the manner in which he describes, one could easily ask to what extent the two substances are distinct.  Monism of an Eastern variety may be the logical conclusion here unless Smith could explain how his ontology could avoid this reduction.

In his discussion of philosophy of religion, Smith correctly identifies that focus on belief dominates the field, but this focus is not universal.  Many evangelical philosophers of religion, such as James W. Sire and J. P. Moreland, have managed to deal with religion as a complex phenomenon involving people who believe at a variety of levels for a variety of reasons.  Furthermore, Smith fails to adequately respect the fact that believers have beliefs that motivate, transform, and inform much of their religious practice.  Spirituality does not arise independently.  For example, the primary reason that Buddhism emerged as a movement distinct from Hinduism is that the Buddha denied both the caste system and the authority of the Vedas.  Doctrine has real consequences, and many Pentecostals appreciate and respond to this more acutely than Smith would allow.  Philosophy trades in ideas, and Smith’s philosophy of religion would denigrate the central role that doctrine plays in the development of religious practices of everyday believers.  This misunderstanding and misevaluation of practice dominates the volume; the remedies are biblical authority and a rejection of postmodern epistemology.