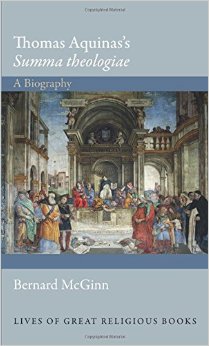 Significant books deserve to be spoken about and revered. In this case Thomas Aquinas’s Summa theologiae —a volume of books—warrants a biographical investigation delving into the influence it has had Western thought and culture. Princeton’s series, titled Lives of Great Religious Books, has taken up this task and selected Bernard McGinn, a professor of theology and history at the University of Chicago, as the biographer of the great Summa. McGinn’s book is a careful analysis of the origin, life, and advancement of the Summa throughout history. This book explains how Thomas Aquinas became one of the most cherished philosopher-theologians that the world has ever known.

The Summa, written in the late thirteenth-century, was a product the Scholastic period. The Dominican Order, to which Aquinas belonged, specialized in using Greek thought to evaluate and formulate Christian doctrine. This method eventually came to dominate Catholic philosophy. McGinn explains how the format of the Summa follows closely with other curricula of its day. Such curricula were firmly rooted in biblical exegesis and Christian dogma. McGinn’s analysis demonstrates how the Summa is stylistically a hybrid of curriculum and diverse commentary on a variety of academic disciplines, always seeking to be reconciled and informed by the Bible. The biography includes a brief overview of Thomas’ character traits and habits that made a seminal work like the Summa possible. McGinn introduces Thomas as a tall, humble man of great intellect and competency, known by his contemporaries for fervency in prayer that exceeded even the requirements of the Dominican Order he ascribed to.

McGinn’s introduction adequately summarizes the context that inspired both Thomas and the Summa. His introduction concentrates on outlining three transformative aspects of Thomas’ life including the reordering of Western medieval Christianity, the advent of the university and scholastic traditions, and the advent of mendicant religious life such as the Dominican Order (10). By orienting the reader with these momentous historical happenings, McGinn illuminates the purpose of the Summa in a significant way. Another benefit to this introduction is that it provides vital background that is key to understanding why the Summa took so long to become popularized in academic schools outside of the Dominican Order.

After exploring Thomas and the conditions responsible for producing the Summa, McGinn provides a “tour” of the Summa’s content. He describes the methodology employed by Thomas in creating the Summa for catechesis. By closely examining the flow and thought of the structure in the Summa, McGinn orients his reader with the Thomas’ polemic approach to catechesis. He does this so thoroughly that his work should be considered a primer for any student seeking to master the content of the Summa. McGinn also endeavors to demonstrate how the Summa provides a case study for how Thomas’ philosophy of science is informed by biblical exegesis (63). By highlighting the way that Thomas approached knowledge methodologically, yet always appealing to the Bible as the supreme authority in rendering a verdict of the facts, McGinn effectively exhibits Thomas’ unique approach to philosophical theology.

December 6, 1273 marks a significant day in the life of Thomas and the Summa. This was the day Thomas ceased writing, leaving the third section of the Summa incomplete. McGinn includes a summary account of Thomas’ mystical experience which caused the complete cessation of his writing, and led Thomas to consider his own work to be “like straw” after his encounter. McGinn describes the event as a possible psychotic breakdown, a true metaphysical encounter, or the coincidence of both (36). He also notes that individual sections of the Summa had already been dispersed, specifically among the Dominican Order, and that at the time of Thomas’ death there was already great interest in the Summa within the Dominican Order.

The last two chapters of McGinn’s work focus on the development of Thomism and the role of the Summa in Thomistic influence. In these chapters, McGinn is chiefly concerned with Thomistic traditions and non-Thomist institutions that have held high regard for the Summa, allowing it to influence internal practices and, in turn, have an effect on the outside world. He also provides commentary on the turbulent journey experienced by the Summa on its way to acceptance during a time when radical Aristotelians were being condemned (117). According to McGinn, Thomas was considered too generous to Aristotle and had not adequately applied scholastic skepticism toward Aristotelian thought. Due to this strong Aristotelian influence, church authorities began to question how much philosophy could be used in the formation of biblical theology.

McGinn also presents political aspects related to the acceptance of the Summa that reveal certain biases in the Franciscan and also in the Dominican Orders. Both Orders made the Summa inaccessible to the larger church for decades after Thomas’ death (121). McGinn outlines the Summa’s struggle for prominence within the Church and within scholastic thought so that the reader may also understand the varied traditions of Thomistic thought. By recounting the disputes of the Church concerning the content and method of the Summa, the reader begins to understand how so many strains of Thomistic thought have come into existence. This section of McGinn’s work contributes much to the life narrative of the Summa.

The Epilogue contains McGinn’s comments on important twentieth-century events, such as the promulgation of the new Code of Canon Law, and scholarly works that were heavily influenced by Thomism. The most notable mention is the sixty-one references to Thomas, largely consisting of excerpts of the Summa, in the 1994 edition of The Catechism of the Catholic Church (203). By investigating the twentieth-century influences of Thomism, McGinn concludes that this century more than any past century, recognizes the Summa for its spiritual depth and riches. The reader finishes with a sense that the Summa is equally bound to the duty of being true to the Bible through expositing both natural and special revelation. The epilogue is followed by an exceptional bibliography covering all-things-Aquinas. There are also several indices covering names and topics relevant to the Summa, making this work a valuable reference tool.

This excellent biography of the Summa was a pleasure to read and serves the purpose of orienting the reader to the wide breadth of influence of the Summa theologiae. McGinn expertly uses a survey style when the reader needs to be aware of large concepts to get the most from his technical exegesis of the Summa and its rich history. It would have added value to the book if the influence of the Summa on contemporary philosophers and theologians were discussed. However, there is only so much one can write when covering the nearly 800-year life of an expansive work like the Summa. McGinn manages to cover the subject with wisdom and eloquence.