Voyage: A Quest for God Within Orthodox Christian Tradition 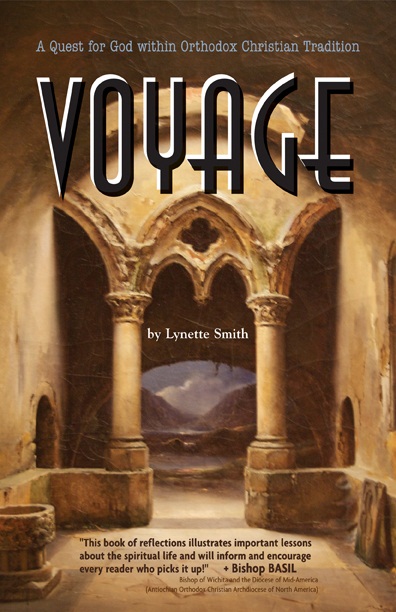 Increasingly over the years, believers in the Christian faith have been drawn to denominations that emphasize ligurgy, tradition, and an historical connection to the past.  This movement has been especially evident among college students. A more radical shift however, has been the number of evangelicals moving to the Eastern Orthodox Church.  The largest such movement took place in 1987 as the former leader of Campus Crusade for Christ, Peter Gillquist, led 1,700 followers into the Antiochian Orthodox Church (“Evangelical Denomination Gains Official acceptance into the Orthodox Church,” Christianity Today [Feb. 6, 1987]:40).  In addition to the movement of believers, there have been movements in academic dialogues concerning this topic, with the first Joint Dialogue between the “Eastern Orthodox Studies group” and the “Evangelical Theology Group” at the November 1999 annual American Academy of Religion meeting.  Lynette Smith’s Voyage chronicles her spiritual journey which “docks” at the Orthodox Church.

Smith embarks on a lifelong journey of seeking spiritual peace, something which she will not fully experience until she encounters the Orthodox Church.  Born to small town Evangelical pastors, she spent her formative years in the faith tradition of the Assemblies of God on a Navajo Indian Reservation in Shiprock, New Mexico.  She attended a college of the same denomination and upon graduation engaged in religious work in her local church as well as missions work in Southeast Asia.  Despite, or possibly because of her varied religious backround, she resigned herself to the fact that she was a “misfit” in her particular expression of Christianity.   She was an outsider and longed for a deeper connection to God.  It was finally within the tradition of Orthodoxy that she found her spiritual home. This change in tradition took place in the midst of completing her Master of Arts degree, Old Testament emphasis at Denver Seminary. Voyage: A Quest for God within Orthodox Christian Tradition encapsulates Smith’s use of the tools and treasures of the Orthodox Tradition to live her day-to-day life in the presence of God.  The author, rather than defining the canon or practice of the Orthodox Church, chooses rather to reflect from the spirit of Orthodoxy.

Keeping with the metaphor of a journey or voyage for life, Smith arranges her book around six different particulars of a sea expedition.  Each chapter is further subdivided into a number of smaller stories in which she intertwines snippets of sayings or practices from the Orthodox Tradition. The first chapter (“What I’ve Been Looking For”), expresses the idea that the author is on a journey “not just to wander aimlessly, but with hope of a discovery and a destination”  (xv):  the ultimate hope being that as she seeks God she will travel beyond herself, and in doing so become more of herself in the journey. She does not readily accept God’s path for her life because she cannot imagine the glorious destination he might have for her; not unlike the Israelites’ inability to imagine God’s path for them through the Red Sea.  This path she likens to theosis, what the Greek elders of Christianity defined as “the process of a human becoming totally filled with God” (9).  “Sick at Sea” speaks to the importance of finding spiritual balance through repentance and humility.  The thought life (logismoi) and its negative impact on our spiritual souls is contrasted against the Logos (Word of Christ) which when allowed to richly dwell within, has the power to transform one into a person of deep peace, truth, and love.  Chapter three (“No Solo Vogage”) emphasizes the importance of others (angels, saints who have died, and earth’s creatures) accompanying us on the spiritual journey, in addition to God.  This concept is very Orthodox in nature, and would counter what some may describe as a culture more slanted towards an independent, individual, and American faith.

“Land Locked” speaks to the topic of “spiritual dryness” and Smith relates how the Desert Abbas and Ammas (fathers and mothers) have guided her through various dry periods in her journey, one in which she came just short of taking her life.  As seen throughout Scripture, the desert is a place of refinement for one’s faith.  The author poignantly affirms this fact when she compares her experience of despair with Elijah’s, when he retreats to a desert cave and God comes in a “still small voice.”  She reflects, “I took much longer than Elijah did to take God’s reassurance and straighten out my life……well, did Elijah have to run all the way to Sinai in order to renew this?  Only God knows.  What I do know is that God used our wind-blasted despair to hollow out in each of our hearts a cave where, depleted and mute, we could hear his murmur of hope” (91).  In the fifth chapter (“Dying to Live”), the author stresses that the only way to live the journey, fully in Christ, is to die to one’s self, to surrender one’s will.  In giving up her will to God, she realizes that she is mistaken in setting the “conditions of my personal devotion and emotional experience (whether suffering or ecstasy) as the measure of Christ’s potency.”  It is Christ’s cross that is the threshold of her life, not her circumstances.  “Are We There Yet?” closes the book with a look to the limitations of one’s ability to evaluate spiritual progress towards maturity.  Smith rejoices that those who have gone on before her to the desired destination (heaven) are cheering her on until her journey is ended.

Theological differences aside, Smith is to be commended for her candid and transparent disclosure of her spiritual journey to the Orthodox Tradition.  The insights that she offers can serve to nurture the souls of all those seeking a deeper relationship with the Lord Jesus Christ.