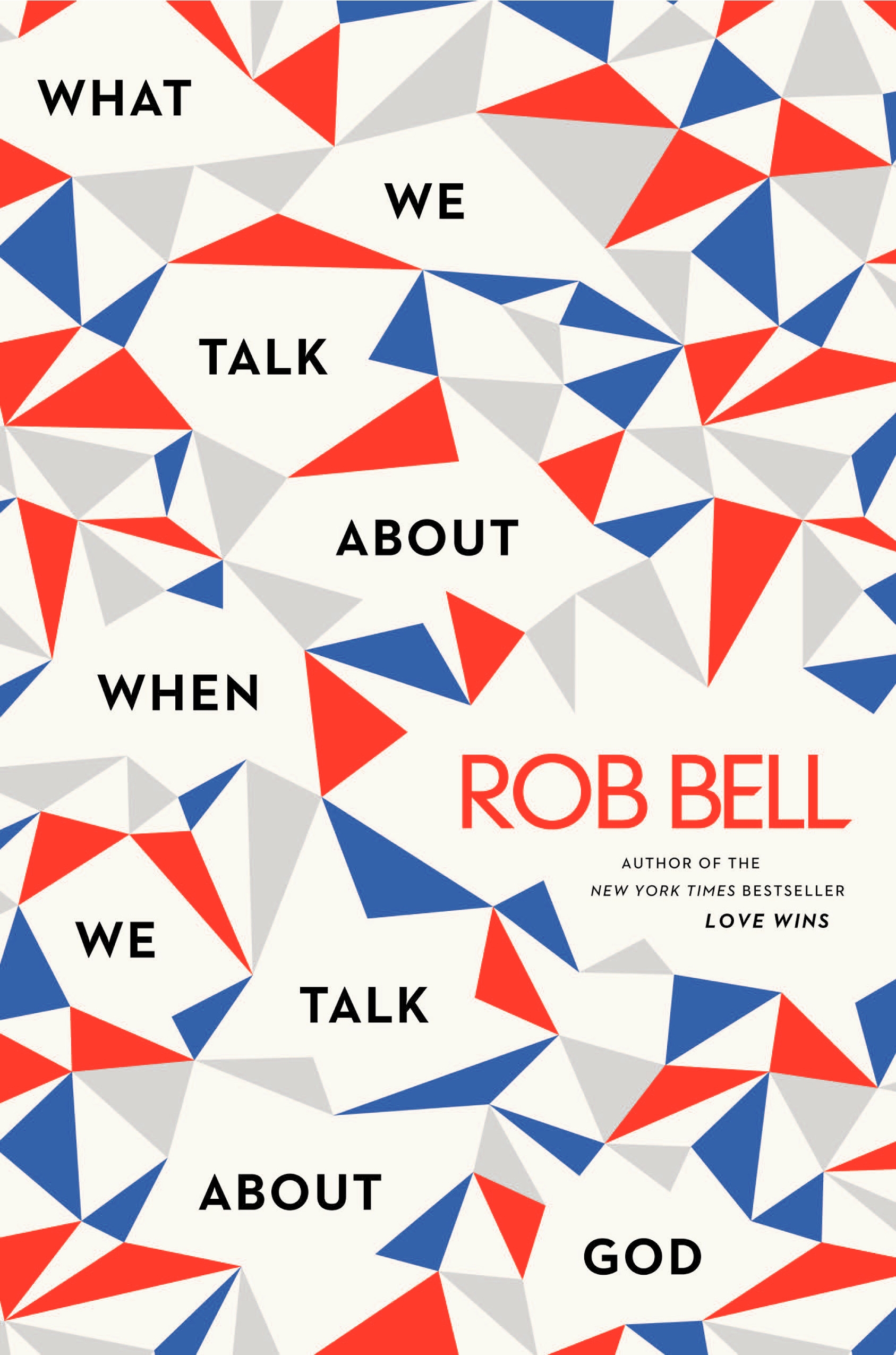 When Rob Bell published his first book, Velvet Elvis in 2005, it was marketed as being for, in Bell’s words, “people who are fascinated by Jesus, but can’t do the standard Christian package.”  Eight years and seven books later and Bell’s still pursuing a fresh perspective on biblical faith.  Hot on the heels of his controversial Love Wins in 2011, Bell’s latest work, What We Talk About When We Talk About God is the latest in a line of whimsical observations about spirituality that are as fanciful as they are oddly formatted.  Once again, Bell’s line of thought from page to page bounces around as per his standard style (something he even tips his hat to the reader about on page nine, moving from a story about his Oldsmobile to a memory of a debate he was in to an anecdote about Jane Fonda in the space of half a page).  Indeed, Bell’s focus shifts as suddenly as his words do when they suddenly appear

But Bell is an easy target for criticism these days and although this book has several important points to be wary of, it also brings up a few interesting ideas that are valuable on their own merit (though none are unique to Bell).  This review will take a form sometimes referred to as a “compliment sandwich,” wherein positive observations will appear on either side of the negative ones like bread surrounding the delicious components to a crunchy BLT.  Still, I doubt this meal will go down easily: I’m not sure who the “we” is that the book’s title is referring to, but it simply cannot mean “orthodox Christians.”

First of all, Bell should be commended for an admirable critique of a purely “scientistic” approach to knowledge.  Repeatedly throughout the book, Bell highlights both the strengths and the limitations of science for explaining our world.  While he uses a quirky (and unorthodox) interpretation of quantum physics to do so, he peppers his reader with a variety of examples of things that science is simply not equipped to explain; as he says, “Science does an excellent job of telling me why I don’t have a tail, but it can’t explain why I find that interesting” (75).  This is not meant to denigrate the discipline, but to clarify its proper use.

What Bell recommends instead – rather than epistemological balkanization – is a holistic approach to experiencing the world that does not strongly differentiate between “sacred” and “secular” venues or modes of living. Bell is certainly right to point out that so-called “professional Christians” like pastors or ministers are not doing “spiritual” work that is all that different from what Jesus calls every one of his followers to do each day.  In a move that would make Francis Schaeffer proud, Bell condemns the idea that society should fracture into a two-story, sacred/secular split, where religion become entirely private and secularism is expected for public discourse.

The problem is Bell’s solution.

As is clear from the title, this is a book about language, and Bell seems to think that if we all – Christians and otherwise – can agree about the concepts our words refer to, then this sacred/secular split will simply dissolve.  However, rather than explaining key terms of Christian doctrine (so as to lay out the Christian worldview), Bell repeatedly redefines them.

Consider, for example, Bell’s watered-down definition of what it means to “repent” that makes no reference to confession, forgiveness, or sin whatsoever; indeed, to Bell “[i]t means to change your thinking, to see things in a new way, to have your mind renewed” (137).  Rather than present Peter’s message from Acts 3:19, Paul’s message from Romans 10:9, or John’s message from 1 John 1:9 about the importance of seeking forgiveness for the debt that our transgressions against God have incurred and turning to walk a new path; Bell simply redefines repentance into something akin to “thinking positively.”  He illustrates his point with a story about an Alcoholics Anonymous meeting where he was struck by how honest people were with their emotions – a fine story, but one wholly lacking any sense of debt or wrongdoing that must be made right.

So, it should not be surprising to also see that our debt-payer is redefined along with our debt.  In Bell’s book, Jesus’ entire mission on Earth was to “show us what God is like” (132).  He did this not only through his teaching, but through his resurrection, when “he faces the worst that can happen to a person, and comes out the other side alive in a new way” (195).  In itself, this might be thought-provoking, but it comes at the head of an argument Bell makes about how we should work to do precisely the same thing: “When we do this—name our fears and sins and failures and own up to them, describing them as clearly as we are able—we pass through them into the new life on the other side. We have faced the worst about ourselves and we have survived, making us strong in the only sense that actually matters.” There is no sense that this Jesus died to set captives free (1 Tim. 2:6).  This is not a Christ who paid a price that sinful humanity could not pay (1 Peter 2:24, 1 John 2:2).  This is simply a moral teacher and exemplar who led the way down a path that we all should follow – and it is up to us to do so.

Indeed, “the gospel,” to Bell, has nothing to do with the love and mercy of God in sending His Son to die for our sins (John 3:16), but is entirely focused on us under the idea that “God is for us” (147) – “For” even being the title of one of his seven chapters.  In a move that actually smells worse than Pelagianism, Bell repeatedly ignores the reality of sin—original or otherwise—that requires atonement for the sake of describing a God who blindly and unwaveringly supports everything that we, his children, do.  And although it is undeniably true that while we were yet sinners, Christ died for us, Bell stresses God’s support of us and our failures without ever naming the fact that we have failed.  “Confession,” to Bell, becomes catharsis: it’s “like really, really healthy vomit. It may smell and get all over the front of your shirt, but you feel better—you feel cleansed—when you’re done” (191).

But, this is really not all that surprising, either, given Bell’s redefinition of God.  While he offers at least half-a-dozen different explanations of the term in What We Talk About When We Talk About God, the only sense the reader gets that God is an actual person is the personal pronouns that Bell uses occasionally to refer to him. Instead, one is treated to a variety of descriptions of God as “the very straightforward affirmation that everything has a singular, common source and is infinitely, endlessly, deeply connected” (118), “the sense you have…that hope is real, that things are headed somewhere, and that that somewhere is good” (121), or “the power pulling us forward” (190). While his blunt assertion that “you are already experiencing the presence of God with you in countless ways every single day” (122) is comforting, it can also be misleading if no call for sin-confessing repentance is included.  Much ado was made two years ago over the quite significant something that is Bell’s soteriology, and this book fleshes out his position much more: God is already with us, so why do we need saving?

Indeed, in a sentence that starts off so beautifully – “When we talk about God, we’re talking about the Jesus who comes to reunite and reconnect us with…” – Bell was shocking in his redirection away from the orthodox position, away from the point of the Incarnation (Phil. 2:5-8), away from God to, “…the sacred depth, holiness, significance, and meaning of every moment of every day” (185).

But, to make sure our compliment sandwich has bread on both sides, what this does allow Bell to recognize is both the possibility of healthy interplay between faith and doubt, as well as the importance of working through such issues together as a community of believers.  As he says, “[d]oubt is often a sign that your faith has a pulse” (92), particularly if it leads you to learn more about what you believe.  Moreover, he stresses the value of relying on other people to help you as you travel down your path.  The extremely individualistic Christian is indeed more lonely than anything else. And it should be mentioned that Bell’s account of some of the wrestling he’s gone through with doubts about the Bible is a valuable commentary on the historical cultural progressiveness of God and biblical ethics; Bell gives some cogent explanations (in a way reminiscent of Paul Copan’s Is God a Moral Monster?) of a few Old Testament passages (Ex. 21:23-25 and Deut. 21:13-14) that are sometimes treated anachronistically and unfairly.  When properly contextualized, Bell points out that these passages reveal a very forward-thinking God when compared to other religious options of the day.

So, while What We Talk About When We Talk About God offers a handful of valuable ideas, they can all be found in other, less troubling works. At the rate he is going, Bell’s next book will have to be stocked on a wholly different shelf in the bookstore than his others, for he has abandoned just about every orthodox definition of our most important Christian terms.  According to this work, the whole world (because of quantum physics) is illusory, but God is in everything so it’s all miraculous and spiritual. Jesus is special because he shows us what God is like and called us to change our minds and see that God wants to help us to be everything that we want to be or, at the very least, feel happy (aka “the gospel”). Moreover, Jesus died and “as the story goes” (145) rose again to demonstrate that no matter how bad life might get, we can handle it.  Everything – even Communion (206) – is about us.

As a Christian, that is so very much not what I’m talking about.