Where Shall Wisdom Be Found? A Grammatical Tribute to Professor Stephen A. Kaufman 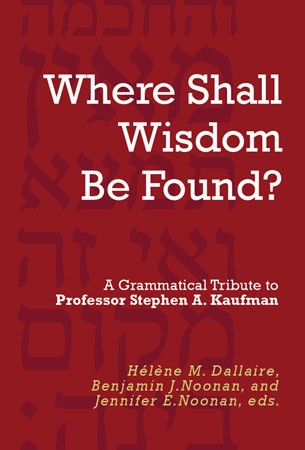 This work was written as a festschrift presented to Stephen Kaufman by some of his students who completed their PhD’s with him while he was professor at Hebrew Union College Jewish Institute of Religion at the Cincinnati campus. Following preliminary tributes and bibliographical lists of publications and PhD dissertations by Professor Kaufman, the fifteen chapters of contributions begin. Each chapter discusses a major area of Classical Hebrew grammar. It presents both morphology and syntax, as well as a survey of some of the major issues of debate in the academic world. This review will highlight primarily syntactic arguments and conclusions.

The first chapter, “Nouns, Adjectives, and Adverbs” (pp. 1-19), is written by one of the editors, Benjamin J. Noonan. It delves into the area of noun patterns, some of which form general semantic categories of nouns while other do not have a consistent meaning. Noonan sides with those who identify the elative in remnants of Hebrew adjectives, especially Hiphil forms that can express lasting qualities. As for adverbs, the appearance of a few specific lexemes are complemented by nouns in the accusative case, and especially by Hiphil infinitives absolute.

Peter Bekins contributes the chapter, “Definiteness and the Definite Article” (pp. 21-36). Suggesting that the definite article may have developed from a presentative construction, he notes that both identifiability and uniqueness provide bases for the use of the definite article. Definite singular nouns may also be used for generic reference.

Brian A. Bompiani considers “Prepositions” (pp. 37-64), arguing that nouns for place and body parts form the background and origins of prepositions. As is so often the case, context serves here for identifying the semantic range of individual prepositions. Bompiani provides major uses and meanings for the most frequent prepositions. He argues, among other things, that the preposition ’el functions in a manner identical to ‘al in the books of Samuel, Kings, Jeremiah, and Ezekiel.

Christopher Jero reviews “Tense, Mood, and Aspect in the Biblical Hebrew Verbal System” (pp. 65-84). He provides an important discussion of these terms in Hebrew grammar. Of special interest is the distinction of deontic modality which describes the speaker’s will or what the speaker perceives as appropriate or fitting. Epistemic modality considers whether the situation is real, potential, speculative, or something else. Jero then looks at the various morphological forms related to these elements: the volitives, the long yiqtol, the preterite, the qatal, the weqatal, and the participle.

Steven W. Boyd’s “The Binyanim (Verbal Stems)” (pp. 85-125) reviews the forms and uses of the various stems. For Boyd, the Niphal is best understood as middle-passive rather than reflexive. It also could provide an inchoative sense. The basic senses of the Piel are affirmed: factitive, iterative (or “pluralitive” where appropriate), and denominative. In many cases the nature of the verb determines the particular nuance that the stem takes. Thus, the Hithpael is usually reflexive for active transitive verbs, reciprocal for stative transitive verbs, iterative for active intransitive verbs, and factitive for stative intransitive verbs. The Hiphil often adds an object when it appears, rendering intransitives transitive and transitives doubly transitive. The elative (in the Hiphil) occurs with stative intransitive verbs. Boyd then considers some of the most common roots and how they occur in the Qal and in all four of the major derived stems. An interesting example is pqd.  In the Qal it describes intense personal attention for good or ill, when God is the agent. When another person is the agent, it can describe inspection or assessment, especially in the performance of one’s duties. In the Niphal it sometimes carries the sense of something or someone who is missing and the consequent emptiness of the place. God is the subject of the single appearance of the Piel of pqd. He musters an army in Isa. 13:14. The pual may actually reflect Qal passives. The Hithpael has the reflexive sense of an army mustering for battle. The “Hiphil describes the assigning of a completely new authority.” Hophals form passives of the Hiphil. Boyd concludes with a warning about generalizations for the stems.  Instead, usage is key.

Michael D. Matlock, “The Perfect (qatal)” (pp. 127-37), notes that the perfect began as a verbal adjective with the personal pronoun added. It occurs in dependent, disjunctive, background, and negated clauses as well as those where non-verbs begin the clause and in proverbs and (as the so-called prophetic perfect) with a precative sense in some prophetic and other texts.

For Grant Testut, “The Imperfect (yiqtol)” (pp. 139-49), West Semitic took the preterite yaqtul, and rendered it in a nominal category by originally adding a nominative ending, -u(n). The preterite/jussive form does not take the occasional nasalization found in forms of the imperfect (e.g., the so-called paragogic nun). The basic sense of the imperfective is durative or continuous. There is an irrealis sense that may be related to the subjunctive yaqtula.

An editor of the volume, Hélène M. Dallaire, contributes the important chapter on “Volitives” (pp. 151-77). This chapter is well written (with some duplication for emphasis of important points) and, along with Jero’s chapter, should be read before the others that address the verb. Dallaire discusses the cohortative first, identifying it as characterized by the qamets-he suffix. This suffix does not appear when other suffixes (or sufformatives) are added to the verb. It may appear in other persons, in addition to the first person. It originates in the yaqtulan(na). It may be distinguished from the jussive when a nÄ’ follows it. The cohortative will regularly include a dagesh in the nun (note this development from Testut’s article above). The same is true of the 3ms/fs verbal suffixes. The cohortative uses -ennu/enna; whereas the jussive uses the “lighter” -ehu/eha forms. Dallaire relates William Moran’s rule of modal congruence and applies it to biblical Hebrew. Where there are two clauses in which the second is a purpose clause; if the first clause uses an indicative, then so does the second. If the first clause uses an imperative, jussive, or yaqtula; then the second (purpose) clause uses a jussive or yaqtula. The imperative includes the regular form and the one (discernible only in the 2ms) with the qamets-he suffix, already noted with the cohortative. Whereas the long imperative focuses on the interest of the speaker, the regular imperative (with or without the ethical dative or nÄ’) focuses on the one addressed. The jussive form is morphologically distinguishable in the Qal of the final -he and medial weak verbs, and in the Hiphil stem. The first person jussive is rare. The second person jussive is often used as a prohibition with ’al. The third person jussive is the most common. A jussive following a first jussive or an imperative often introduces purpose clauses. The loss of final short vowels renders the volitive yaqtula indistinguishable from the yaqtulu, both of which may appear in Hebrew as (we)yiqtol. While the yaqtula volitive is controversial and difficult to distinguish, Dallaire identifies it “where the final he of the verb is preserved in sequence with other volitives” (p. 174).

Tarsee Li continues the verbal discussion in his chapter on the “weqatal” (pp. 179-211). The weqatal non-consecutive has a penultimate stress in the 1cs and 2ms forms, while the weqatal consecutive verbal form has the ultimate stress. Following Moran, the weqatal is derived from the suffix conjugation of the apodosis in conditional sentences. For Li weqatal forms may express irrealis but do not always do so. He examines the uses of weqatal in Genesis. Weqatal after cohortative and jussive may express purpose. After an imperative it continues that sense. After an infinitive construct it may resume the foreground of the discourse, though not always. After a participle and after qatal, it may express future time; whereas after wayyiqtol it may function as non-sequential (w + qatal). It may also continue the past tense following qatal. After a nominal clause, weqatal may be future though Li finds one case in Genesis of a past frequentative. W + qatal, when it initiates a protasis, may be non-sequential.

In his chapter, “wayyiqtol (The Narrative Preterite)” (pp. 213-43), Tarsee Li understands the origin of this form in the Semitic preterite, corresponding to the Akkadian iprus. Its primary use is to carry forward the action of the discourse as a true past tense. It can sometimes express anterior (pluperfect) sense, such as after a pluperfect qatal. It may occur in non-foregrounded clauses where it continues the subordinate context of the protasis clauses. It can introduce a narrative and also function as a final summary statement. After weqatal (and w + qatal), wayyiqtol may express a preterite function, whether as an individualizing circumstance or to resume the narrative foreground. After yiqtol, these forms generally continue the time reference (usually past tense). After an infinitive construct, the wayyiqtol may continue the subordinate context or resume the foregrounded narrative. While the wayyiqtol may continue the present or habitual time reference of the participle, it more often refers to past time. The same is true of a nominal clause. The wayyiqtol tends to express the preterite. In post-biblical Hebrew qatal replaced wayyiqtol.

Peter Bekins explains “The Participle” (pp. 245-58) as a verbal adjective that can “participate” in both verbal and nominal paradigms. The active predicate participle often establishes a background within which a second(ary) event has occurred as part of the narrative foreground. It can express the present progressive and is used to describe surprising or unexpected events. The participle also occurs in the sense the imminent or immediate future. On the other hand, the passive participle often can be associated with a resultant or enduring state.

Ting Wang and Benjamin Noonan describe “The Infinitives Absolute and Construct” (pp. 259-73). The infinitive absolute stems from the Semitic infinitive whereas the construct is a distinctive Hebrew development. In a preposition before the main verb, the infinitive absolute emphasizes that verb within its context. In postposition (after the main verb) it expresses duration unless it cannot be prepositive (e.g., before a wayyiqtol). When it is postpositive but non-paronomastic (from a different root than the preceding verb), the infinitive absolute can develop the sense of the narrative with circumstantial fronted action, or it can modify the preceding verb (often in a Hiphil form). It can also replace a noun or an adjective, and it can be used as a strong imperative. The infinitive construct can be used to denote purpose or result (with a lamed), temporal nature (with a kaph or a bet), nominal aspects, and epexegetical expressions (often with a lamed).

Grant Testut discusses “Conjunction and Disjunction” (pp. 275-88). Amarna calls into question that view that West Semitic texts have no separation larger than word separation (note p. 275 n. 1; cf. my “Rhetorical Forms in EA 162,” Ugarit Forschungen 22 (1990) 137-148; meaningful line divisions between text on a tablet may also appear in some Ugaritic texts). Testut identifies disjunctive clauses as any that do not follow the narrative preterite initial VSO order. The perfect and imperfect verbal forms are aspectual while the preterite is tense related.

This work is a most helpful survey of morphology, grammar, and syntax in Hebrew grammar. It is a current reflection and assessment. There are areas one could wish had been addressed. For me, that would me personal and proper names, which are mentioned once (p. 33) in passing. However, what most would identify as the major areas are covered. This could be a useful second year Hebrew grammar review and enhancement. I did use it that way and found it helpful for my students; although I needed to summarize it for them in class and highlight the key points. Probably the single major problem with the book it its title. It sounds like a festschrift on wisdom literature. It is not. It is an excellent summary of Classical Hebrew grammar that will guide teachers and graduate students alike into major breakthroughs and directions in this key area for interpreting the Bible.