Why Jazz? A Concise Guide 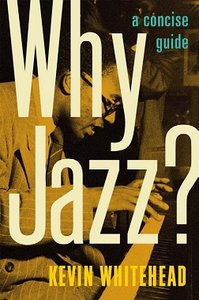 Small books on big themes are a tough gig.  Jazz is a uniquely American, musically challenging, and highly improvisational musical form. Jazz is also a rather vexing topic to explain to the uninitiated (or even to the initiated, who quarrel much over it). Several years ago, I played some late-period work of John Coltrane (the first four minutes of “Transition”) to a group of friends at a party held at my home. I asked for silence and concentration, rather rare commodities at parties. One of the uninitiated attenders later confessed to me that she wondered if the people she heard knew how to play their instruments. Yes, they did. Part of the present problem is that jazz makes up a very small percentage of the music market (the last time I checked it was a paltry 4%); and those depressing numbers may include Kenny G, who, saxophone aside, is not a jazz performer—or an abysmally poor one.

Despite these obstacles, long-time jazz critic, Kevin Whitehead has the chops to distill much of the essence of jazz in Why Jazz?  After a fine chapter on “the basics” of jazz, he organizes his material chronologically, instead of thematically, moving from “roots” all way to “jazz after 1980.”  According to Whitehead, “What is Jazz”? Here is part of his answer.

Jazz is a music of rhythmic contrast, featuring personalized performance techniques that usually involve improvisation. It mixes aspects of folk and art music, and its aesthetic reveals a strong African American character (5).

By “rhythmic contrast,” Whitehead means syncopation, a concept not easily explained. However, he does so later in the book, defining it as “any deviation from a regular pattern of beats in music, to make rhythms more complex and dynamic; placing a heavy accent on a normally unstressed beat in a bar” (141).

I take slight issue with Whitehead’s definition. It seems that jazz always involves improvisation, and almost always group improvisation, where each musician is adjusting to all the others—on the fly. This is part of its essence, a necessary (but not sufficient) condition of its being. Jazz musicians never play the same tune exactly the same way twice. The racial features of jazz are also much-contested (the excellent television series and book Jazz, by Ken Burns [2000] arguable emphasized race over the music itself), but none can deny the formative role played by African Americans, although the contributions of whites and others should not be downplayed.

Every chapter is organized by the interrogative subtitles, modeling the book’s title Why Jazz? The first question of chapter one is to the point: “Why listen to jazz?” The last question of the last chapter is, “What is the future of jazz?” This lends a very conversational feel, without being facile. The book also includes the useful features of a glossary, notes, discography, and suggestions for further reading. All these elements make for a superb primer on the music and culture of this fascinating art form.

As a fussy and ardent jazz appreciator, I found no great sins of omission or commission, although small books on big topics must, by definition, be highly selective and make some contested claims. Jazz is not geometry. As a Duke Ellington aficionado, it was heartening to see several pages dedicated to the question, “Why is Duke Ellington revered?”

Whitehead is an able guide into the colorful cosmos of jazz. He combines enough musical theory to illustrate key ideas, but does not overwhelm with details that non-musicians would fail to grasp. He does justice to the history and origins of jazz, which is no easy assignment. His job was not to philosophize about jazz, but to introduce the reader to its salient aspects. However, there are constitutive elements of jazz that are instructive for all of life, and which resonate richly with a Christian worldview. I shall only mention two: syncopation and improvisation.

First as Pastor Robert Gelinas highlights in Finding the Grove: Developing a Jazz-Shaped Faith (Zondervan, 2009), syncopation can be a way of life. Find the off-beat, spy out a new angle on life, and get out of the routine— all for the Kingdom of God. Jesus was not pedestrian, but prophetic. His acts were never random, but often cut against the grain of a fallen world. “The meek will inherit the earth” is not a standard chop, for example. Another jazz critic, Whitney Balliet, called jazz, “the sound of surprise.” The Kingdom of God, when embraced cross-wise, is often surprising—and even disconcerting (like jazz).  We play to the beat of a different (and syncopated) drummer. That requires some prudent risks.

Second, improvisation is a vital element of a life well-lived in Christ. The Great Commission demands no less than taking the whole Bible to the whole world in order to renew God’s shalom (Matthew 28:18-20). The Bible gives us the framework and incentive to “disciple the nations,” but it does not write out all the notes. All should be done in the power of the Holy Spirit, but there is much room for sanctified improvisation.  The early church had to improvise a bit in how to disciple Gentile converts. (Jesus never addressed this manner directly.) A letter drafted to some of these converts seems to insinuate some improvisation, which was approved by God. “It seemed good to the Holy Spirit and to us not to burden you with anything beyond the following requirements…” (Acts 15:28).

As social critic, Os Guinness had observed, most evangelistic strategies are geared for those already close to conversion. But little has been done to devise strategies to challenge very secular people, who seldom even think of God or the Gospel of God’s grace (Ephesians 2:8-9). Therefore, Guinness founded The Trinity Forum for just that purpose. A similar story could be told about the Veritas Forum, but I leave it to you to investigate this ministry. Let us be inspired to jam well for the Kingdom that cannot be shaken (Hebrews 12:28).

Jazz, of course, is not everyone’s cup of tea. There is no imperative to love or study jazz as a Christian. However, as Paul exhorts us: