Your Church is Too Safe: Why Following Christ Turns The World Upside-Down 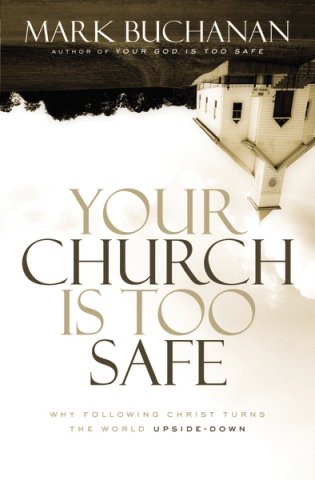 This book addresses ecclesiology.  The underlying assumption is that the Church has grown fearful, paralyzed, boring, and safe.  If you just felt an “amen” surface when you read that statement, you need to read this book.  Mark Buchanan is a Baptist pastor in the Vancouver area.  I have read nearly all of his books and found this one his most courageous work.   He addresses the underbelly of the missional movement, social taboos, gay marriage, territorialism, and corporate sin, and he suggests a moratorium on vision casting.  Did I mention he is courageous?  He offers a caution regarding the popular emphasis on the ‘missional church’ when he states, “in our eagerness to make up for lost time and regain lost ground, and to reach lost people, we’re running the risk of calling evil good, or at least of not naming evil” (page 33).

True to his writing style, Buchanan fills his book with anecdotal experiences from his pastoral experiences and travels.  At times I was brought to tears with the power of those narratives.  One particularly powerful thread through the book is his work with the Cowichan (First Nation) people of the Vancouver Island area of British Columbia.  Buchanan has been asked to address various tribal gatherings where he has heard stories of abuse, betrayal, and what he refers to as the ‘Canadian Holocaust’.   The book not only addresses the need for the church to begin to address the individual sin among its members, but also the corporate and national sin about which the church has either been ignorant or willfully passive.  I was fascinated when he stated that his favorite scripture about God’s method of evangelism is Zechariah 8 (Chapter 7 in the book).  Using Zechariah 8, Buchanan identifies four restorations – religion, commerce, the land, and the favor of nations.  That certainly stretches the scope of salvation.  Did I mention he is courageous?

An exercise the author uses to help the reader (and those who attend workshops he conducts on the topic) understand the drift to safety and ineffectiveness by the church is the “A to H” continuum (The entire exercise is included in the appendix of the book).  The exercise consists of reading a passage from the book of Acts followed by a reading from the book of Hebrews to show the drift by the church.  The passion, risk, and energy of the church in Acts is juxtaposed to the church that had grown disengaged and distracted in Hebrews.  It is a creative and revealing exercise that supports the thesis of the book.

There are eighteen brief chapters in the book.  I generally seek to identify the best chapter in a book. In this case, I decided it was chapter nine where Buchanan describes “in-between” places.  These are the places where the Body of Christ intersects with the world: work, play, restaurants, and our neighborhoods.  Too often the church is afraid it will be guilty of compromise if it inhabits the in-between places as part of the church.  So, we continue the false dichotomy of our sacred and secular lives by keeping the church out of these “in-between” places.  Buchanan challenges us to bring the church into those places by working with schools, women’s shelters, local governments and businesses.  He even walked along side the Cowichan people in a parade celebrating their heritage – an “in-between” place.

Then I read chapter twelve and came to the decision that it was the highlight of the book.  He opens that chapter by describing a couple that had decided to attend the church he serves as pastor.  All indicators would lead the reader to perceive this as a wonderful family with two children until he introduces the parents as Linda and Rita.  Needless to say it has caused a great deal of tension (including some departures) in the church.  But that is the point of this chapter titled, “When Clean and Unclean Touch”.  The church has become too sterile, safe, and unwelcoming.  In this chapter, Buchanan identifies five convictions he believes should be held by the Church.  It is the third conviction that most impressed me:  “When someone brings their mess into the light, their mess usually doesn’t get cleaned up unless one of us wades into the mess with them” (page 131).   How can we hope to reach those who most need grace when we are only filled with truth?  However, Buchanan also makes it clear that acceptance of grace-starved people does not imply approval of their lifestyle.

Then I read chapter fifteen and decided that it was the highlight of the book.  In this chapter Buchanan discusses the distinction between equality and oneness.  Our culture seems fixated on equality.  The Bible is little interested in equality.  From Genesis to Revelation, it calls us to something greater: oneness.  Equality demands sameness, but oneness presumes difference.  To be one with someone else, I have to accept that I can be weak where you’re strong and vice versa.  Oneness is intrinsically cooperative and equality is inherently competitive.  I was deeply challenged when the author called for oneness in the church and our marriages.  The prayer of Jesus in John 17 was not for equality but that all of them may be one.

As much as this book is focused on ecclesiology, the implication is evangelism.  If the church becomes risky and open to those who may not fit, unexpected things can happen.  In the last chapter of his book, Buchanan shares one such experience.  A streetwalker named Wanda attended their church and gave her life to Christ.  In the immediate weeks that followed, she was the first to arrive and sat in the front row. The second week she even brought a friend, one of her kind of people.  His message that morning was when you’ve tasted the love of Jesus, you want to serve.  Wanda heard and wanted to serve.  When the pastor called the elders to come forward to serve communion, only two came forward.  Wanda was openly appalled. She stood, glared at the congregation, and then walked up to stand beside the other elders to help serve! So, the elders and Wanda in her short skirt and spiky heels served communion.  Could such a thing happen in your church – or has it grown too safe?