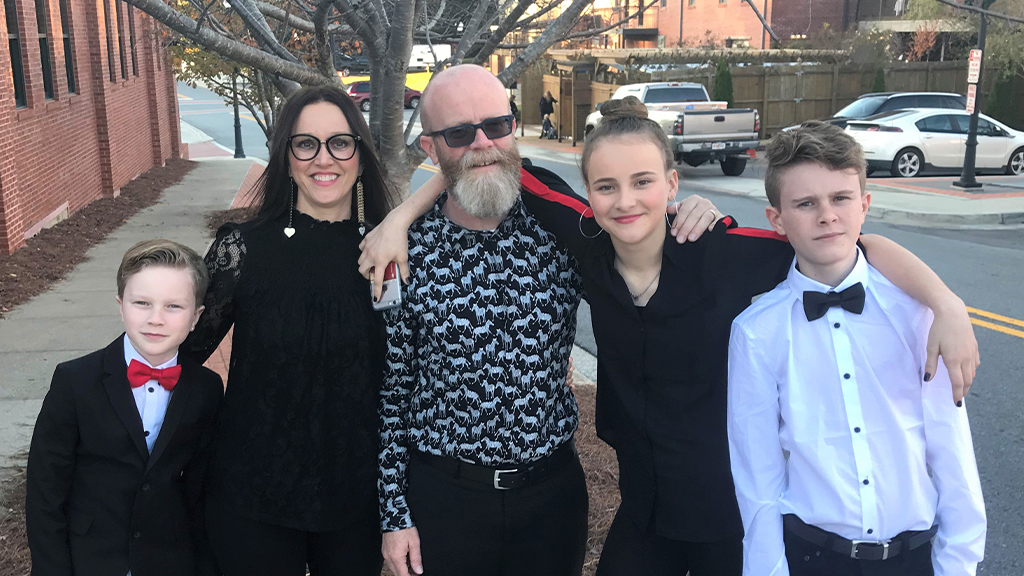 Brian Ralph’s spiritual path has never been conventional. “I grew up in the Catholic Church in Ireland, but I had kind of walked away from my faith as a Catholic when I came to the States,” he explains. “At 26, I was working in Chicago, six years into my immigrant journey, and had just gotten my own apartment in Chicago. I had a rough day at work, and when I came home, I sat and looked at my apartment thinking, Is this it? Is this the American dream, a bunch of stuff in my apartment?

Brian had a tract that someone had given him at lunchtime. “I got on my knees and prayed the sinner’s prayer. And that was it—I was just a big pile of mush on the floor. Something shifted in me. I walked into the kitchen of my apartment, and warm sunlight was streaming into the room. I heard inside my spirit, ‘Welcome home son, it’s great to have you back.’”

After that, Brian says all he wanted was to dive deeper into the Scriptures. “I couldn’t get enough of the Bible,” he says. “I started looking for a church. I felt called to seminary, but I didn’t go until I was 41, and married with children.” In the meantime, Brian worked as an executive coach for corporate workers in IT/business.

In 2010, Brian began his seminary search, and learned about Denver Seminary. “I visited, and I loved it. I could see my family living on campus. I loved the classroom environment—and the spiritual formation and soul care aspect was the most appealing to me. Denver just felt right.”

The Ralphs moved to Denver in August 2011. “My family says the years we lived at Denver Seminary were the best years of our lives. Some mornings during my first semester, I’d walk from our campus apartment to the library thinking that I shouldn’t pinch myself, lest I wake from the dream. I would look out the window of the library and see my kids playing in the field. The kids would fly by on bikes, and my wife would call, ‘Slow down! You’ll run over a professor.’ The professors who pressed me hard in class became close family friends.”

Brian describes Denver as a spiritually healing place. “During that first semester, my then seven-year-old son told me, ‘Dad, since moving here, my soul has come alive.’ I told him, ‘Me too son, me too.’ The church we came from was very harsh and fundamentalist. Scriptures were taken out of context; there were control issues. The Bible wasn’t handled well, and it kept people in a state of dependency. We, as a family, needed healing from that experience.”

At Denver, the Ralph family found that healing. “It wasn’t, ‘this is what you have to think about an issue.’ It was ‘This is how you think about an issue. This is how you exegete a text and look at different angles.’ I developed a love of church history and spiritual formation. I was taught the tools to properly interpret Scripture. And I met my mentor every Tuesday in Red Rocks State Park—walking with that 70-year-old pastor from the mountains was so healing.”

After graduating, in September 2016, the Ralphs moved to San Antonio, where Brian was connected both to a coaching job, and a church plant. Though working full-time, Brian threw himself into his church plant residency. “I was gung ho. The city was to be transformed for God. Every interaction with a place or a person was ‘How will this move our church forward?’ Every party we threw with neighbors was to bring them into the fold.”

By October 2018, Brian began having doubts. “My wife and I were arguing,” he says. “We had previous visions of church planting, but this wasn’t it. We were coming out of unity—our marriage was under stress. At Denver, we had said we wanted to reach marginalized people and make them feel at home. We were reaching neighbors in the church plant, but it wasn’t organic.”

Still, Brian pushed on with the church plant. “They announced me as the church-planting pastor in January 2018. I worked with a team for a year, and in January 2019, we started having weekly meetings. It was so confusing—I was doing what I wanted to do and I was miserable. I wasn’t available to my family. I was busy at work, and busy at night with church planting—something had to give. I just knew this wasn’t what I wanted to do. I felt no joy. I would wake up and feel in my spirit, I am joyless. “While my intention was good, I had lost the peace of presence. God felt distant. I lost Him in the mix of all of this madness.”

A lack of close friendships at his church was also wearing on Brian. “Some guys from different churches invited me to go through a Rick Warren book together. They met in pubs. I went as a participant—there wasn’t pressure for me, I was just one of the guys, and there was a ton of joy. I realized I had to prioritize having close friends.”

Returning to joy, he says, was the key. “I’ve moved to Chicago, Denver, and San Antonio—all scary things. But there was a great joy and vision in them. There was fear, but the engine was being driven by joy. With the church plant, there was no joy, just fear. I had two mentors and they both said, ‘You have no energy about this.’”

So in March of 2019, Brian stepped down from the church plant.

Since March, there have been ups and downs. “I went back to Denver Seminary recently, and I worried that people would see me as a failure for walking away from the church plant and stepping away from preaching.” But the changes in Brian’s heart have made it clear it was the right decision. “I may go back to teaching Scripture at some point, but not today.”

“I’m ministering to myself and my family,” he says. “I’m available to my kids. We have neighbors over because we want to get to know them. I don’t want people to think they’re in our house for any other motive but to know them. We do a potluck every two weeks with the whole neighborhood. Our only agenda is to build community and allow people to get to know each other. I started a podcast where we interview regular people. I’m doing some writing. I’m trying to tap into the artist side of me that was starved.”

As a coach, Brian uses the tools he learned in seminary. “It’s like spiritual direction—it’s about creating space for people to discover where they need to go. I try to provide a trusted space. People in corporate jobs carry a lot of weight and anxiety, and as coaches, we can help them get out of ditches. I’ve sat with people who had been angry or extremely sad and seen them grow and the burden lift; not unlike the sessions I did in spiritual formation.”

“When we’re called to an adventure,” Brian concludes, “as scary as it is, there should be joy. I think God uses desire and joy to call us. A pivot doesn’t mean a failure. I think it’s okay to know what you shouldn’t do—even if you don’t know what you should do. Right now, I’m in the space between what was and what’s next. This story is about the impact of the seminary had on my family. It was the best five years of our lives. If it was only to bring healing to my family and me, it was worth it.”

Brian Ralph was born and raised in Dublin, Ireland. He migrated to the US when he was twenty and has been in the IT sector for the last 29 years. He currently works as an Agile Coach. He received an undergraduate from DePaul University Chicago in 2004 and an MDiv from Denver Seminary in 2016. He is married to Bridgette, and the father of Liam, Finn, and Calum. When he is not working, he can be found jogging, writing fiction and non-fiction, and reading about church history and current events. He lives in his newfound home of San Antonio, TX.